LAMENTATION OF A PAN- AFRICAN ACTIVIST
By Camillus Maalneriba-Tia Sakzeesi 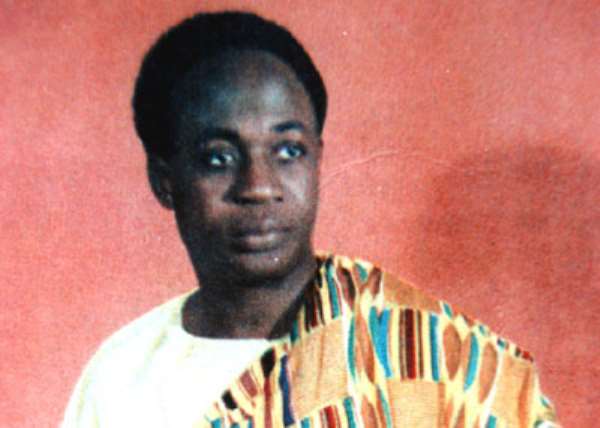 I wish to thank the Heads of State of the Africa Union, for honouring the OSAGYEFO DR. KWAME NKRUMAH, by dedicating a statue at the fore-court of its headquarters in Addis Ababa, Ethiopia, on the occasion of its 18th Summit of Heads of State and Government.

Nothing could be more befitting than building a replica statue of the one that was damaged by the dislocators of Africa's progress spearheaded by agents of America's Central Intelligence Agency (C.IA) in Ghana by the 24th February, 1966 coup stagers.

Since the beginning of the “DARK DAYS IN GHANA”, remnants/admirers of this shameful act have not regretted the draw-back situation they brought to Ghana and Africa as a whole. But as the praise-phrase has it that “NKRUMAH NEVER DIES”, is what has finally caught up with us as we look at the statue of immortalization with pride.

I recall the shameful shut-off of a live broadcast by Ghana Television (GTV) during the 2007 Ordinary Session of the Assembly of Heads of State and Government of the African Union hosted in Ghana. It occasioned when the then Commissioner of the AU, Alfa Konare began eulogizing the Osagyefo.

Sadly, this is how some citizens of the birth place of the Great African want to desecrate the man's name and 'bury' his memories.

Happily, too, the entire Continent of Africa has remolded his 'physical' stature, and exhumed his memory for posterity, following the December 1999 declaration of him being the “AFRICAN OF THE MILLENIUM”.

It is in the light of this that I wish to thank the current leadership of the AU, saying a big AYEKOO to you.

Having said this, it is my right (and may be that of many Africans) to express my disappointment at the lip-service being accorded the visions of the Osagyefo. For, what he stood for travels beyond the building of monuments in his name. He stood for the African being proud and capable of managing his own affairs. He stood for the technological advancement of the continent.

However, before the above, he stood for a practical political Unionized Government of Africa. For it is in the government of this sort, that civil wars can never be experienced. How could we find ourselves in hunger, squalor and backwardness in such a government that would have owned close to 60% of the world's natural resousces?

At the Ghana Assembly of 2007, our leaders argued out that it was yet not time to unionize and have a centralized government for Africa. Four years on, we have still not thought of carving out a unitary government.

On August 18, 1961, the Osagyefo signed the Ghana-China Co-operation. But as one banker said, Ghana's part of the agreement survived for only five years due to Nkrumah's overthrow.

China continued to grow to the level at which it has the capacity to single-handedly take the cost of building a headquarters for a 'Continental Union. China is a state – not a union of states. Wherein, therefore, is our pride?

I wish to urge our leaders that each time they find themselves in the comfort of the plush edifice in Addis Ababa, they prick their conscience to find out whether they are there for the serious and true unification of the African Continent.

My observation of certain developments bothering on peace in the Continent cannot go without comment. I recall the shameless attempt by the French Government at physically re-colonizing the Ivory Coast with the overt support of the United Nations.

Following the heals of that destabilization act is the neo-colonialist intervention at which Brother Qadaffi was overthrown and murdered, leaving the country in a confused state.

In all these developments, the AU was not much heard and I think they are not exciting developments. Africa has indeed, reduced herself to the level of spite and mockery by our leaders over the decades.

One other act by the AU which I feel disappointed is the Somali famine. I am particularly shocked at the fact that, whereas the global community is busy mobilizing resources at salvaging the problem, the AU met earlier to strategize against its re-occurrence.

I feel disappointed at the AU, because steps must be taken first, to arrest the current situation, before strategizing for the future. How do we plan for the future when we visibly see the PAIN of HUNGER written on the faces of Africa's women and children?

With no shame written on our faces, some of our leaders have currently converged in London, again to talk on issues of Somalia, being address by the British Prime Minister.

In this regard I wish to acknowledge the untiring effort of the former Ghanaian President J.J. Rawlings in the Somali hunger problem.

Progressive in Ghana are observing a memoriam against the over-throw of the Osagyefo which has brought about 46 years of RETROGRESSION to Ghana and the African Continent.

So, for over four decades when Nkrumah incubated the Continental Union Government of Africa, our current leadership cannot hatch it? What then can they do for the people of the Continent?

In conclusion, I am urging the AU leadership that the unionization of Africa is – NOW. I am equally using this medium to urge the youth of Africa to galvanize efforts at pushing these sleepy leaders to rise up to the call of UNIFICATION. In the absence of the youth leading the march for this noble vision of the OSAGYEFO, we may be living in the fullness of our USELESSNESS on the soil of MOTHER-AFRICA. Youth of Africa: push for 'UNIONISATION – NOW'.