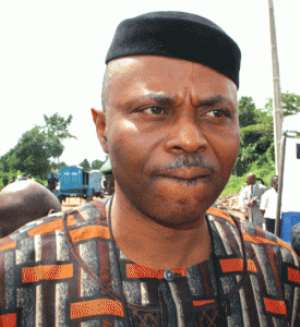 The mass media's influence on the ethics of public life, as characterized by the press's watchdog role in monitoring the conduct of government officials, is assumed to be vital to democracy. The effectiveness of this watchdog role is less clearly understood. Partial answers are found in the evolving institutional history of the press, including its control, ethics, laws, technology, organization, and the content of news stories. It traditionally finds motivation from the popular belief in watchdog success models. Such is the role expected from the practice of every excellent and responsible journalism practice, and Nigeria should not be an exception.

In line with this purposeful spirit which is expected from the 4thestate of the realm (media), Mr Gbenga Adefaye the President of Nigerian Guild of Editors passionately started with a good tone and indeed vigorously spoke the mind of the good people of Ondo State, when he emphasised that the achievements of the Governor has restored the dignity of man in governance. He said he was impressed by the achievements of the Governor, saying he had taken care of those that “are well and lame in the areas of education and the provision of medical care.” The President of NGE said “Don't let us talk about Lagos because the Yoruba can no longer lay claims to it any longer. Lagos has become a commonwealth for all Nigerians. With what I have seen in Ondo State, I think I will be correct to say that Governor Mimiko has set up a model that should be replicated by other states.'' Ondo people are far more intelligent than listening to the tantrums of the political detractors in the State. This declaration by NGE's President clearly showed that the blue-murder of the opposition parties can never be considered as a threat or elephant in the room as far as next election is concerned in Ondo State.

Just recently Ondo State Governor, Dr Olusegun Mimiko, was named the ''Governor of the Year 2011'' by the Nigerian Union of Journalists (NUJ). The union said Mimiko excelled in the area of public projects implementation. National President of the NUJ, Mohammed Garba, said Mimiko was selected on the basis of his transformational track records evident in Ondo State since he came into office. He said the NUJ was happy to see that a Governor of Mimiko's standing was helping to build the people's interest in democratic rule. Governor Mimiko in his usual stance dedicated the honour to what he described as the “resilience, sense of pride and dignity” of the Ondo people. Truly his government should be proud of being honoured by the NUJ, which had correctly assessed the administration's modest achievements. His government had predicated its transformation agenda on total transformation of the people with the major pillars spanning education, agriculture, health, urban renewal and rural transformation. The administration had, as its main target, life more abundant for the people of the state with the execution of over 250 life changing projects. These performances are truly worthy of emulation.

Similarly Governor Olusegun Mimiko won the Governor of the year award at an international award ceremony held in London. Mimiko bagged the award courtesy of Ben TV, based in the United Kingdom. The award ceremony took place at the highbrow Holiday Inn, Kessignton, London, where Mimiko was decorated as “Best Governor of the Year Award. The organisers of the award disclosed that the Governor earned the award as he was discovered to have delivered on his campaign promises beyond the imagination of the governed in the state. The prestigious ceremony graced by over 40 foreign ambassadors and members of the British parliament. It is, therefore, not a surprise that Iroko's achievements within such a short time have been recognised with many awards of recognition to the bargain. Indeed, to show that Ondo State is working, the state, for the first time in its history won the National Productivity Award. It is also on record that Mimiko is the current holder of The Nigerian Tribune Governor of the year 2011, (Best Governor). The testimonies of both local and diaspora media have clearly debunked the misinformation and erroneous perception peddled by the fifth columnist about this affable and amiable leader.

Moreover, there are fresh calls by eminent individuals with records of proven integrity who are now throwing their weights behind Governor Mimiko for a fresh mandate as Ondo State Governor, some of them are former Governor of Ondo State (before Ekiti was pulled out), Evangelist Bamidele Olumilua, retired Anglican Bishop Bolanle Gbonigi, former Secretary to the Government of the Federation, Chief Olu Falae and former President of the Nigeria Bar Association, Chief Wole Olanipekun (SAN). Others included, former Minister of State for Foreign Affairs, Dr Aliyu Idi Hong, foremost industrialist, Chief Oba Otudeko, Emeritus Professor of Medicine, Olujimi Akinkugbe as well as Madam Ganiyat, the wife of late human rights activist and legal luminary Chief Gani Fawehinmi to mention but a few. They spoke at the anniversary public lecture entitled “Of Stated Goals and Proven Performance” chaired by the Governor of Anambra State, Mr Peter Obi. The Lecturer at the event, Professor Akinkugbe, in his lecture said the people will no doubt register their approval and gratitude to Mimiko with their votes in due course because of the pace of progress in all sectors of human endeavour in the past three years.

However, with so many people purporting to be leaders these days especially in Ondo State, how do we recognize a true leader? To answer that question, we must step back and ask: What is it that a leader is really trying to accomplish? A true leader wants nothing more than to make people stand on their own, as leaders in their own right. Instead of trying to blind us with his or her brilliance, a true leader reflects our own light back to us, so that we may see ourselves anew. A true leader shakes people from their reverie and tells them, “No, you don't need to live a life of desperation and confusion. Yes, you do have the ability to find meaning in your life, and the unique skills to fulfil that meaning. That we need not be at the mercy of personal prejudices or the prevailing political wind. That none of us are subservient to history or nature- that we are history and nature. True and genuine leadership goes beyond brandishing of brooms or white handkerchief. Mimiko is still the best man for the job in Ondo State, ''the voice of the people is the voice of God''.