As “Valentine's Day” Approaches, What Christians Must Know. 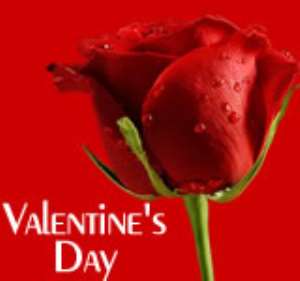 I've lived decades of my life by the love of Christ who bought me to Himself, therefore, I know the power of love and I celebrate it every moment. Addressing the world through these political and life-changing messages for living was not and ordinary pen-and-paper work; it was love - genuine love for those whom Christ died for that has lovingly compelled me to release the truths of God's heart to the world. It's this same love - the love which covers the multitudes of sins but stands as a just judge over unrepentant evil-doers – that motivates me. This love flows from my father, the God of all; and as long as I live, I do not intend to live it burning up in my soul alone; I will release it to all as freely as I have been given - and without bias. But, like Saint Paul, I also do not claim to be anything; I do not attest or claim that I have reached perfection because I only came to discover that there is increasingly more in the power and expectation of the Spirit whenever the flesh tries to compel me against my wish. So, what do I do then? I leave my past and its sins and mistakes inside the “paid” of Jesus. I strive, everyday, to keep myself worthy – not by my works in the flesh, but by my realization and acceptance of God's grace which enables me to strive for godly righteousness and expectations in Christ Jesus. I also realize the deep need of the undying world for Christ and His truths; so I write.

Valentine's Day, or Saint Valentine's Day, is an annual commemoration held on February 14 in celebration of love and sacrifice; today, it's has become a celebration of “love” between intimate companions. The day is named after one (or more because none of them has been thoroughly certified as the particular one whose memory is celebrated in history) early Christian martyrs named Saint Valentine, and was established by Pope Gelasius I in 496 AD. This Pope had to replace St. Valentine's Day with Lupercalia to expel the pagan rituals which dominated that day and was accounted as having been the origin of it by many. However, Valentine's Day remained what it had originally been: a little more of a drunken revel and orgy that majority of ignorant Christians now put clothes back on it to cover. That didn't stop it from being a day of fertility and love because, on every February 14, many consensual and forced sex, unwanted pregnancies, abortions, betrayals, disobedience and disappointments are carried out amongst a large number of Christians in the name of “celebration of love.” However, due to controversies trailing its Christian authenticity and acceptance, Valentine's Day was said to have been deleted from the General Roman Calendar of saints in 1969 by Pope Paul VI. It may have found its way back in because today, as it stands, Christians all over the world celebrate it more than the people of the world. For many Christians, that day is “a celebration which unites the world with the church; a celebration where the world comes to church and the church wears the world.” According to one historical record, St Valentine was a Christian persecuted for his faith by the Roman Empire and in a futile attempt to get him to convert to Roman paganism. He refused and, as a result, was killed. Anther postulates that he was killed by the Roman authority because he was deeply and openly in love with a girl – something considered a taboo in Roman society of the then. As the legend goes, he was given the option of renouncing his love for the young girl in exchange for his life or risk being killed; he retained his love and refused to renounce his affectionate feelings for this girl. Consequently, he was killed. Yet another assertion states that the Valentine celebrated today was actually a Roman Catholic priest who believed that Emperor Claudius II's decree to cancel all marriages and engagements because he was finding it difficult to get young men to conscript into the army was an intrusion and infringement into his canonical obligation to the sacrament of matrimony in the church. According to the story, young men hated to be separated from the girls they felt affectionate to and, therefore, refused to come out for conscription. This led the then Roman Emperor Claudius to decree the suspension of all marriages and engagement. Saint Valentine, along with Saint Marius, was secretly marrying these young lovers. As a result, he was caught and dragged before the Prefect of Rome, who condemned him to be beaten to death with clubs and to have his head cut off. One other compelling claims is that February 14th was a holiday with pagan celebrations to honor Juno, the Queen of the Roman gods and goddesses, also referred to as the goddess of women and marriage. These festivals were usually the avenue for paring-off young unmarried men and women within the empire. On these festivals, men would perform feats of strength to impress the womenfolk. As it was in the Roman times where boys and girls are placed distinctly separate, a box is usually placed which contains the names of maidens; and from this box, young men put their hands into and pick a name which automatically becomes that of their wives. This celebration which comes up every February 14 in celebration of their goddess of marriage usually comes with fetish and pagan rituals and practices rituals - practices, revelries, dances and music filled with the spirit of orgy and debauchery. This did not go down well with the zealot Catholic priest of that Roman time who then randomly chose the name of Saint Valentine to celebrate that day in Christendom in order to replace the effect of the pagan celebration on the growing Roman church.


According to historians, the history of St Valentine's Day metamorphosed from its pre-Christian origins, which involved nudity and orgy, through its arrival as a commercial free-for-all profit-making from sales of chocolate, flowers and jewelries, to its becoming the pretext for wanton, unplanned and life-ruining sexual practices – leading to breaking of vows. From every legend there is about Saint Valentine and his day, February 14, one thing is sure: it has had no moral or spiritually-positive impartation on the society so far. It is sad that our society is made up of many people of other religion – including Christians who have stuffed-up their ears to hear nothing on February 14 except the voice of the accuser of the brethren – luring them to the dark corners of the earth and into the beds of disobedience and desecration of God's temple which is their body. Two to nine months after each Valentine's day, hearts which closed up against the voice of God and that of life begin to bleed, parents feel angered, ashamed and disappointed at their daughters, young men become more callous and devil-like, girls commit their first, second and third murders while souls, woken from their sleep in God's presence, are either suddenly cut off again through unremorseful abortions or rejected at birth and thrown in the dustbins of man's utter hatred against God. Most of the people who claimed to have found love during valentine end up separate and with other couples the next valentine; this could not have been a genuine celebration of love. These days when many ill-informed preachers of the gospel, in their campaign and competition for “financial souls, institute every worldly event in the church without giving them a spiritual foundation, it is pertinent that we, Christians, be reminded that we already have a celebration of a perfect love. Jesus Christ is our perfect example of love, that's why the Bible has rightly stated that “no greater love has one than this: that a man should lay his life for his friends. The laying down of Jesus' life was a burden and a deep, eternal sacrifice for the sins of the whole world; it was a spiritual activity which was carried out with all its weight on the physical Jesus for the salvation of those who believe. This therefore means that, while the world celebrates in the name of Saint Valentine the spirit of debauchery which they have found and loved in the Roman goddess, Juno, Christians all over the world should be celebrating in communion the sacrifice of Jesus until He comes again. This is the proper Christian celebration of true, unconditional, perfect and eternal love which Jesus, the Christ, freely demonstrated to us on the cross.

Every celebration of true love must yield positive fruits, and every act of pure love pleases the Spirit of the church. The church was founded upon true and pure love – Jesus Christ, and every family is an extension of God's church. While that is true, we must be reminded that the first church starts with our individual acceptance of Jesus Christ as our personal Lord and Savior, who “died on the cross for our sins and was “raised to life on the third day by God for our justification.” Therefore, let no man crucify Christ the second time through ignorance in the celebration of false love; Jesus' death on the cross is our true celebration of love and his blood is the communion which binds us. Let no man be ignorant in the house of our omniscience father because abundant wisdom and love abound in our union with Him.