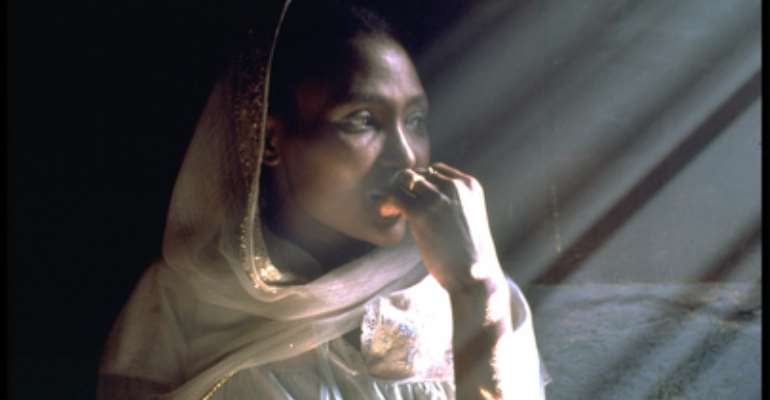 By Kerry Cullinan, Durban, South Africa
Schoolgirl Nomasonto Masango giggles as she lists the things she and her friends want boyfriends to buy them. “If you have an older boyfriend, he can buy you things and it is nice to show your friends that you have things,” says Nomasonto. The most prized items are cell phones, jewelry and fashionable clothes.

Nomasonto is six times more likely to become infected with HIV from a man over the age of 24 than from a boy her own age, according to research conducted in Vulindlela, her semi-rural village in South Africa.

In Southern Africa, the HIV statistics for young women are high. In Nomasonto's village, over half the young women aged between 20 and 24 are living with HIV, while less than a third of men the same age have HIV.

Worldwide, a quarter of all new infections are of women aged between 15 and 24. The majority of these young women live in sub-Saharan Africa, where six out of every 10 people living with HIV are women. AIDS is still the biggest killer of women of child-bearing age in Africa.

Southern African countries carry a high burden of HIV (in Swaziland, a quarter of adults have the virus), while the risk moderates in East and Central Africa and is relatively small in West Africa.

Biology as well as social, cultural and economic factors conspire to make women much more vulnerable to the virus than are men. Physiologically, women are four times more vulnerable to HIV infection than men. Infected semen remains in the cervix for some time, there is a large surface area in the vagina and cervix exposed to the virus, and the vagina is more susceptible to small tears during sex. Young women's cervixes are even more vulnerable, particularly when they first start having sex.

The most compelling risk factor is women's lack of power to ensure they have safe sex. There is evidence that many women are unable to abstain from sex, guarantee that their partners will be faithful or insist on the use of condoms — the famous “ABC” mantra of AIDS educators.

The Global Campaign for Microbicides (GCM), a US-based civil society group and active in Africa, describes the HIV prevention messages “encouraging abstinence, mutual monogamy and male condom use” as having “little relevance for the majority of women at risk; even less for those in resource poor settings.”

In many African countries, particularly where people have been displaced by war, women are extremely vulnerable to sexual violence and “transactional sex”. Even in countries where there is no war there is a high level of coercive sex. In one survey, 40 per cent of young South African women reported being sexually abused before they reached the age of 19. A study in Kenya and Zambia found that young, married women under the age of 20 had a higher HIV rate than did unmarried women — mostly because they had married older men.

Ugandan AIDS activist Beatrice Were was a virgin when she married, but she discovered shortly after her husband died that she had been infected with HIV by him. “I had abstained and remained faithful, but ultimately it was meaningless,” she explains. “And so I was left at 22, widowed with two baby daughters, and enveloped by a cloud of bitterness that took years to disperse.”

Ms. Were became one of the first women in Uganda to publicly declare her HIV status. She started the National Community of Women Living with AIDS (NACWOLA) in 1993, one of the first organizations in Africa to support women with HIV and lobby for their rights.

South Africa's Treatment Action Campaign (TAC) in 2001 successfully used the courts to force the South African government to roll out a national campaign for the prevention of mother-to-child HIV infection. It has also campaigned tirelessly for access to anti-retroviral medicines, including cheaper generic ARVs.

There are dozens of AIDS activist organizations in Africa facing severe budget restraints as donor funding dries up. Rwanda's first lady, Jeanette Kagame, has ensured that the Organization of African First Ladies is lobbying and fundraising for HIV programmes, including for women living with HIV.

At a High Level Meeting of the UN General Assembly on AIDS in June 2011, member states pledged to take all necessary measures to empower women and strengthen their economic independence.

However, the fight against the virus is increasingly threatened by a lack of funds. Donor funding in Africa peaked in 2008, but donations are declining as the global economic recession takes its toll.

The US President's Emergency Plan for AIDS Relief (Pepfar) has been reducing funding allocations since 2008. It is trying to transfer responsibility for treatment to governments in the countries where it donates funds. Many other countries are slowing down on treatment, prevention and care.

The Global Fund to Fight AIDS, Tuberculosis and Malaria announced after its September 2011 board meeting that it is facing “resource constraints,” and is “revising down” the grant money it has to disperse to countries in need. Some of its grant money may only be available in late 2013.

As it stands, only four out of ten Africans who need anti-retroviral medication are able to get it. Only half of African HIV-positive mothers receive ARV treatment to prevent their babies from getting the virus during pregnancy and birth.

Rather than seeing funding reduced, the global effort to combat HIV/AIDS “needs increased support,” argues Dr. Peter Mugyenyi, director of the Joint Clinical Research Centre in Kampala, the largest ARV treatment facility in Uganda. UN Women, the world body's agency on gender issues, agrees, emphasizing that “more resources are needed, and strategies and programmes must be targeted to women in particular.”

For women in Africa, it is literally a matter of life or death.