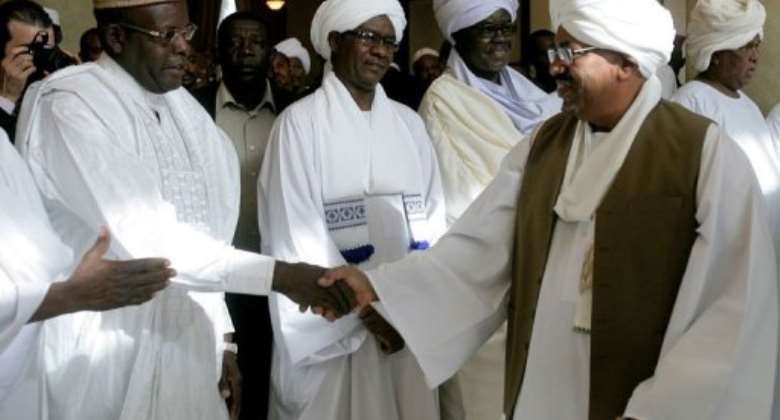 KHARTOUM (AFP) - Chad's President Idriss Deby Itno wed the daughter of the alleged Janjaweed militia leader on Friday at a ceremony attended by Sudan's president who is accused of war crimes in Darfur.

Neither Deby nor his bride, Amani Musa Hilal, were present for the Islamic ritual held at a luxury hotel in the Sudanese capital, an AFP photographer said.

But Hilal, whose father is reputed Janjaweed chief Musa Hilal, arrived later for a party that followed the ceremony. Wearing a white Western-style wedding dress, she joined about 1,000 guests who were serenaded by Sudanese singers.

The state-backed Janjaweed confronted African rebels who rose up in the Darfur region of western Sudan nine years ago against the Arab-dominated Khartoum government. Several years of conflict have since shocked the world and led to allegations of genocide.

Hilal has not been named as a war crimes suspect but became subject to US sanctions in 2006.

Sudanese President Omar al-Bashir is among six people being sought or who are before the International Criminal Court in The Hague (ICC) for alleged crimes in Darfur.

The country's Defence Minister Abdelrahim Mohamed Hussein, also wanted by the ICC, was another high-profile guest at the wedding.

Amani Mussa Hilal, a university graduate, was represented by Bashir at the ceremony presided over by a Sufi sheikh. Under Sudanese tradition, the groom would be expected to attend but it was unclear why Deby was absent.

Deby's insurgent forces had sought sanctuary in neighbouring Darfur prior to overthrowing Hissene Habre in 1990.

He has led Chad, one of the world's poorest countries, ever since. Although his country and Sudan have traded accusations of supporting rebel forces working against each other's regimes, relations have improved over the past two years.

Chad refused to arrest Bashir on the ICC charges when he visited the country.