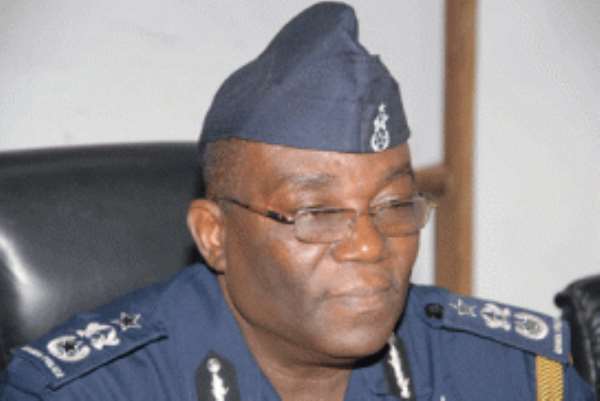 The Police Administration has pointed accusing fingers at the trial court where an exhibit tested and certified to be cocaine later turned out to be sodium carbonate and has petitioned the Chief Justice to institute an investigation into the matter.

According to the police, the court, and not the police, should take full responsibility for the turn of events, since due process was followed in tendering the exhibit in the court.

Addressing the press in Accra yesterday, the Director-General of the Criminal Investigations Department (CID) of the Ghana Police Service, Deputy Commissioner of Police Mr Prosper Agblor, said although the Police Administration had commenced its own investigations into the issue, there was the general feeling that the court should be held culpable.

He said the seal on the exhibit was broken in open court and the exhibit kept overnight at the court before samples of it were taken to the Ghana Standards Board (GSB) for testing.

He said at the time the court took custody of the exhibit, the seals had been broken and no attempt was made to re-seal it before being kept by the court, thus making the exhibit unprotected and vulnerable.

Mr Agblor said police involvement in the handling of the exhibit, therefore, ended there, adding that besides, no objection was raised by all the parties when the exhibit was first tendered in court.

He said the police and the prosecution had been aware that the charge against the suspect was not bailable but the court, unfortunately, decided otherwise by granting bail on two occasions to the suspect in the case.

Giving the background to the case, the CID boss said the suspect, Nana Ama Martin, had been arrested with a ladies' bag containing one slab of a whitish substance suspected to be cocaine on August 22, 2008.

He said on August 29, 2008, the exhibit was examined by the Police Forensic Laboratory and it tested positive for cocaine, with a net weight of 1,018.57 grammes.

Mr Agblor said on September 4, 2008, the suspect was arraigned before the Circuit Court, presided over by Mr Kyei Baffour, on a charge of possessing a narcotic drug without lawful authority and was remanded in custody.

He said after several adjournments, the accused person was granted bail by the High Court on November 11, 2009, but she jumped bail and travelled to the United States of America.

He said while the surety of the accused was being dealt with at the court, he managed to lure Nana Ama back into the country, caused her arrest and handed her over to the police on July 21, 2011.

He said on July 25, 2011, she was again arraigned before the Circuit Court and later charged with the offence of possessing a narcotic drug without lawful authority on a fresh charge sheet and she pleaded not guilty and was remanded in custody.

Mr Agblor said while the trial was going on, counsel for the accused filed a motion for bail at the High Court on September 16, 2011 and the application for bail was granted in the sum of GH¢60,000, with two sureties to be justified, and her sureties produced an indenture which was sent to the Lands Commission for authentication.

He stated that while waiting for the execution of the bail, the case was called on September 27, 2011 and the investigator gave evidence and tendered the exhibit in court, where the sealed exhibit was shown to the court.

He said defence counsel raised no objection to the exhibit and it was admitted in evidence.

Mr Agblor said on the orders of the court, the Police Forensic Laboratory seals were then broken open and the exhibit handed over to the court for safekeeping while the case was adjourned to September 28, 2011 for cross-examination of the investigator.

He said on September 28, 2011, the trial resumed and, surprisingly, defence counsel raised an objection that the exhibit which had been admitted in evidence was not cocaine.

The unsealed exhibit was then brought from the custody of the court and the judge ordered for a sample to be taken and sent to the GSB for re-examination.

He said the court clerk took the sample and handed it over to the court registrar to keep and on September 29, 2011, on the orders of the court, the registrar, accompanied by the investigator, sent the sample to the GSB for re-examination.