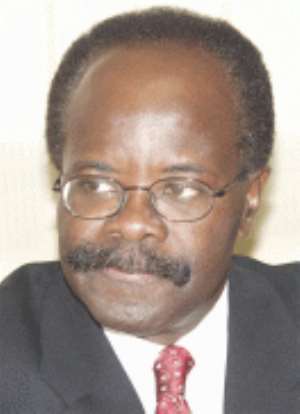 An aspiring presidential candidate of the Convention People’s Party (CPP), Dr Paa Kwesi Nduom, has suspended his bid to run as the flag bearer of the party in the 2012 general election.

Rather, he has decided to assume a back-seat role in the affairs of the party to avoid being accused of overshadowing the leadership and taking over the party.

To ensure a level playing field for all presidential aspirants of the party, he has further decided to stop all campaign and regular activities with the regional and constituency executives of the CPP, hoping that that approach will leave the field wide open for aspiring presidential candidates such as Mr George Aggudey, Professor Agyeman Badu Akosa, Mr Bright Akwetey and others to campaign for the support and attention of delegates mandated to elect the presidential candidate.

At a press conference in Accra Tuesday to convey Dr Nduom’s decisions, the Youth For Nduom 2012 said Dr Nduom would rather focus his attention on organising his campaign, supporters and volunteers outside of the CPP.

Speaking on behalf of Dr Nduom, the Spokesperson for the Youth for Nduom 2012, Mr Nii Armah, said in order to avoid conflict, “Dr Nduom will speak from his personal perspective and not as the party’s spokesperson, as alleged by the General Secretary of the party, Mr Ivor Greenstreet”.

He debunked the assertion that Dr Nduom was responsible for the poor showing of the party in the 2008 general election.

“To ascertain the real causes of the 2008 result, Dr Nduom wishes that a committee be established under the auspices of the CPP’s Council of Elders, working with the Ghana Peace Council,’’he stated.

Mr Armah expressed the view that some people in the CPP were using Dr Nduom to mask their own shortcomings.

According to him, Dr Nduom had no intention of disrespecting the leadership of the party, stressing that “all his effort was geared towards improving the support base of the party’’.

“Since the 2008 general election, Dr Nduom has never relented in his effort to reorganise the CPP,’’ he said.

Last Tuesday, the Chairperson of the party, Ms Samia Yaba Nkrumah, accused Dr Nduom of creating disunity and conflict among the party’s supporters and delegates.

According to her, Dr Nduom was responsible for the decision of one-third of the party’s National Executive Committee (NEC) to

convey an urgent meeting to fix a date for the CPP’s presidential primary.

Reacting to the chairperson’s allegations, Mr Armah said the party was only looking for someone to blame for its inability to organise its primary.

A member of the Youth for Nduom 2012, Mr Kofi Asamoah-Siaw, told the Daily Graphic that Dr Nduom was the only candidate capable of leading the CPP in the 2012 general election.

“Apart from Dr Nduom, who else can overtake the NPP and the NDC?’’ he asked.

He said the CPP’s chances of taking power from the NDC depended on Dr Nduom.