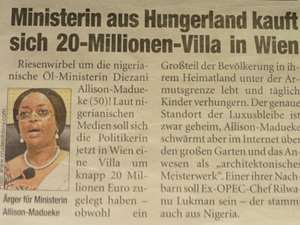 Mr. President Sir and Fellow Nigerians, it is yet another shame of insult in far away Vienna, Austria, Europe. According to a shocking bomb revelation by a free daily newspaper in Vienna, Austria called “Heute”, there is a secret mansion villa worth 20 million euro bought by the current oil minister Mrs Allison Madueke. The headline reads “ Ministerin aus Hungerland Kauft sich 20-Millonen-Villa in Wien” (Female Minister From Hungerland Buys Herself 20 Million Euro Villa In Vienna). As provoking and insulting as this headline yet I have been forced to swallow my pride to say that I am very grateful to “Heute” for the exposure of this unpatriotic display of the oil minister because her behavior is more provoking and insulting than the headline.

Here is the full translated version of the above text as reported by the newspaper:

"Big turbulence about the Nigerian Oil Minister Diezani Allison-Madueke (50)! According to Nigerian media the politician is said to have bought a villa in Vienna for just under 20 Million Euro – even though a major part of the population in her home country is living below the poverty line and children are dying daily of starvation. The exact location of her luxury lodging is secret, but Allison-Madueke is enthusiastic about the big garden and the estate referring to it in the internet as “architectonic masterpiece”. One of her neighbors is said to be former OPEC boss Rilwanu Lukman who is also from Nigeria."

The "Heute" newspaper said that their news was taken from Nigerian media and I have tried to google such news without success. However, I trust them because they are civilized and cannot publish such damaging news like this one without being sure. Consequently oil minister, we are expecting you to challenge the newspaper in court and restore your dignity if you say it is not true or bow out from that position peacefully.

Dear Nigerians, we all know how impossible it is for a civil servant to save 20 million euro cash in buying a house. In a developed country like Austria where I am living you cannot live above your income without being questioned by the authority. Therefore, how did the minister get this huge amount of money in buying such a mansion? When did she buy the “Villa”? Could it be before she became a minister or after? Could this be her only mansion outside Nigeria? Is she the only minister or government official involved in this wickedness? If this money should be in Nigeria it will definitely help our economy. With this money factories could be comfortably opened and jobless graduates rooming around the streets gainfully employed and crime reduced. How did this get exposed you might ask? Nigerians are very curious and furious. Rumor moving round Vienna, Austria has it that the person that helped her in buying the house was not properly settled, therefore “Yawa must gas”. Those that are praying for Nigeria should please never stop praying because God is in control. Remember our president appealed to us Nigerians to keep on praying for him because he is seeing terrible Goliaths all over Nigeria. Goliaths he said that are ready to kill their father and mother, even their children just to stop his government. Today we can shout hallalujah because one of those Goliaths has been miraculously exposed through our prayers.

Another interesting open secret was the saying that her luxury mansion was close to that of the former oil minister Rilwanu Lukman. What it could mean is that the former ex oil minister's house cannot be at anything less than Allison Madueke's mansion in terms of value and luxury if not more. If this should be a true statement, when did Rilwanu Lukman buy his own mansion? How did he get such money? As a former public office holder he must equally be investigated.

Will EFCC do their job very well? Or are we going to see another probe committee that will never see the light of the day as usual? I weep for my country!

On this note Mr. President Sir, I as a concerned angry Nigerian humbly request for the immediate suspension of this minister, because she will not honorably resign due to the uncivilized way of most Nigerian politicians with regard to past events. I also appeal to Nigerians in Austria through this medium to come together and support a planned peaceful protest by a group of concerned Nigerians. Furthermore, I equally appeal to other Nigerians all over the world to get in touch so that we may have a one day worldwide protest against this shame if possible, because we are all involved.