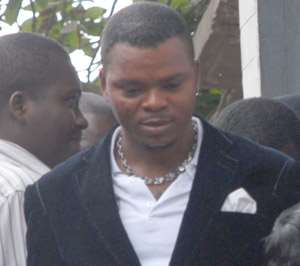 FOUR MORE charges were yesterday preferred against the founder and leader of God's Way International Ministry, Bishop Daniel Obinim, who is in court for allegedly assaulting two journalists at an Accra-based radio station, Hot FM.

The bishop and two of his associate pastors, Kingsley Baah, 25, and Kofi Akwettey, 35, on their first appearance in court, were charged with three charges of conspiracy to commit crime, unlawfully causing harm, and causing damage to private property.

Obinim, who was also accused of having sexual relations with the wife of one of his pastors, cruised to the court in an unregistered red Range Rover four-wheel drive, with his church members virtually laying a red carpet for him.

However, in court yesterday, the prosecutor, ASP Reindorf Agyemang, substituted the charge sheet with a fresh one which increased the pastor's charges to seven and that of his pastors to five.

The three suspects were jointly charged with conspiracy to commit crime, unlawful entry, causing damage to private property and assault.

Obinim had two additional counts of the use of offensive weapon and causing unlawful harm.

According to the prosecutor, the damages caused by the accused persons to the equipment at Hot FM studios were estimated at GH¢130,850.

The prosecutor informed the court that he would have to forward the docket to the Attorney General's Department for advice on the charge of the use of offensive weapon because it is a first degree felony.

Counsel for the accused persons, Kwame Afriyie, prayed the court to admit them to their former bail which the trial judge, Eric Kyei-Baffuor, obliged and granted them GH¢50,000 with two sureties. The case has been adjourned to September 26.

As usual, his church members were at the court to show solidarity.

Presenting the facts, ASP Reindoff Agyemang said the accused persons on Monday, August 8, 2011 stormed the studios of Hot FM and attacked Paul Kwame Ntim Okatakyie, the host of 'Nya Asem Hwe,' an Akan programme on the station, and another panelist, Shadrach Adu.

One of the topics being discussed at that time was the alleged sex scandal involving Bishop Obinim. In the course of the discussion, his alleged tape recording about the issue was played on air and issues about his wife and his pastors were also discussed.

Bishop Obinim and his accomplices, who were offended by the said discussion, allegedly stormed the Adabraka-based radio station with a crow-bar and sticks.

He allegedly attacked the staff and vandalized studio equipment, and inflicted injuries on the host and other panelists including Rev. William Amoako-Atta.

Shadrach Adu, a victim who managed to escape, reported the issue to the Adabraka Police after which the accused persons were arrested.

He said that the victims were issued with forms to seek medical treatment.

Obinim has been in the news lately for allegedly having sex with the wife of Pastor Williams Fobi, a junior pastor of his church.

He is reported to have admitted to having amorous relations with the lady because she was sexually appealing and that he enjoyed her.

However, Bishop Obinim claimed that God had forgiven him because he and his wife, Florence, had prayed fervently for forgiveness.