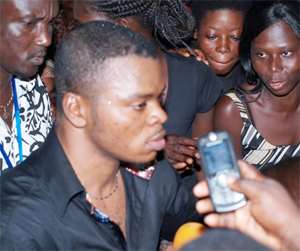 NEWS-ONE has listened to an audio recording in which a certain Pastor Vincent Mensah who claimed he was from the International God's Way Church was begging dreaded fetish priest Nana Kwaku Bonsam not to challenge Bishop Daniel Obinim at the anticipated 'contest of miracles, signs and wonders.'

According to Pastor Vincent, Obinim was currently battling to keep his reputation as a Man of God and facing a fetish priest in such a contest would not be in his interest, especially when he cannot be sure of the outcome of the contest.

Daniel Obinim, the Christian leader of the International God's Way Church, who confessed that he was bonking the wife of a junior pastor of his church, threw a public challenge of 'miracles signs and wonders.'

The bishop said he was called and anointed by Jehovah the God of Heaven and dared any pastor who doubted that divine calling and anointing to face him in a challenge of 'miracles, signs and wonders'.

Obinim also bragged that he had used the name of Jesus Christ of Nazareth to invoke the spirit of lunacy and paralysis on the child of the woman he committed adultery with, so as to prove his divine calling from God.

Bonsam has accepted to challenge Obinim and dared the Christian leader to fix a date and venue but Obinim has apparently chickened out of the contest.

Subsequently, Bonsam  gave a three-week ultimatum, after which he would call the bluff of Bishop Obinim and challenge the latter right in his church auditorium but the bishop has still not dared to accept the challenge.

Speaking in Twi on the tape, Pastor Vincent noted that what Obinim wanted to do now was to get an out-of-court settlement with the management of Hot FM in Accra, after the station dragged him to court for invading their studios armed with a crowbar, with which he vandalized property and assaulted others.

Obinim is noted for repeating endless chants of 'halleluiah', during his television preaching series. He drives very expensive cars and has a couple of houses in Kumasi and Accra. The man of God has over the years been the lead character of several scandals.

Obinim Divorce Scandal
News broke in July 2009 that Florence Obinim, one of Ghana's finest female gospel artistes, had packed bag and baggage and headed for London with her two kids without the knowledge of her husband, Bishop Daniel Obinim.

The ace gospel singer, who was pregnant, according to sources, left for London after a heated quarrel with her husband. The two were said to have engaged in fiery fisticuffs at their matrimonial home.

He has however settled his differences with Florence and they are living happily as man and wife.

In November 2009, the Suame Divisional Police Crime Officer, DSP Kwaku Duah, confirmed to PEACE NEWS that he had ordered Bishop Obinim to produce two individuals to assist in investigations into a case of conspiracy.

Bishop Daniel Obinim is alleged to be the brain behind a plot to bury dead snakes, bones suspected to be human parts, and red candles at the church premises of a rival pastor, Prophet Ebenezer Adarkwa Yiadom, at Ahenema Kokoben, a suburb of Kumasi.

Bishop Daniel Obinim was at the police station to give a statement, after which he was granted bail by the police.

Obinim HIV Scandal
In January 2010, Obinim again became a subject of news when a 30-year-old trader, Florence Nyame, threatened to take a legal action against him for publicly claiming that she was infected with the deadly HIV\AIDS virus.

According to Florence Nyame, medical reports made available to her by doctors indicated that she was not infected with the killer virus.

But Bishop Obinim allegedly told his entire congregation at Ashalebotwe in Accra that the woman's failing health was due to the fact that she had contracted HIV/AIDS.

A tearful Florence said this had made her a laughing stock in her neighbourhood ever since the day of the announcement before a large congregation.

Obinim Court  Date
Obinim would appear in court on August 30, after he was given bail in a case in which he is being tried for invading the offices of Hot FM.