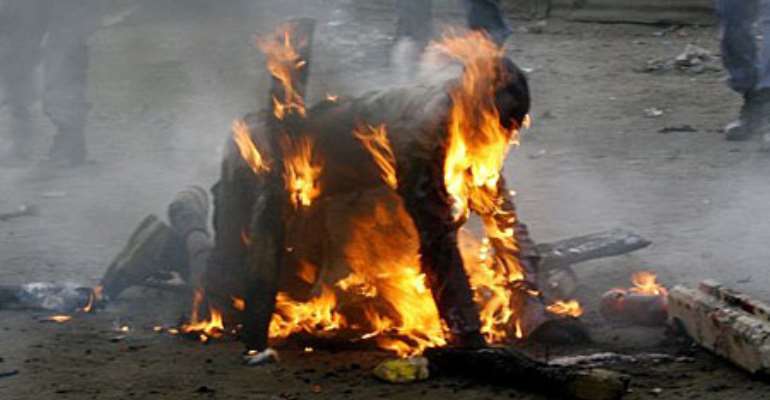 A man suspected to have bewitched a village elder at Moturumesi village lynched alive in Kisii County two weeks ago. @ EPA

My eyes nearly became a waterfall when I watched a-five-minute video shared by a friend on facebook in which about five suspected witches and wizards (elderly men and women) were set ablaze in Kenya. Shockingly, tiny pieces of firewood, maize stalks, withered and dry leaves, and things of that sort were thrown on the victims to keep the raging fire burning. The poor souls were screaming in pain for help and mercy but to no avail. They were burnt alive in broad daylight by fellow human beings. Surprisingly, almost all the onlookers were behaving as if that which was being witnessed was normal and not a big deal. None of them was showing any sign of disapproval let alone trying to stop the barbaric killing. Could humankind be that wicked? Could this justify the assertion of Shakespeare's character, Timon of Athens, that it is better to go into the woods and live with animals because 'the unkindest beast [is] … kinder than mankind'? These were the questions that I repeatedly posed to myself. If the footage was real, then Timon is probably right; the cruellest beast is kinder than many human beings. Sure, the footage was not a section of a fictional movie or drama, it was real – the five elderly people were burnt alive. Their “crime” was that they had cast spells that lowered the intelligence of the children in their village, and had also caused the death of one child.

It may be recalled that in November 2010 a 72 year old woman was also burnt alive in Ghana's port city of Tema after being accused of witchcraft. She was allegedly set on fire by a group of five adults including a so-called pastor after she was tortured into confessing to being a witch. The accused ridiculously claimed that they poured anointing oil on the woman to expel the “demon” from her and that the oil caught fire in the process of exorcizing her. When the heck did anointing oil start catching fire by itself?

Ipso facto, the practice of witch-hunting and the burning and execution of suspected witches began a couple of centuries before the birth of Christ in places like Egypt, Babylon and Rome. Witchcraft was in fact punishable by law in many western countries including Great Britain, Germany, Sweden, Italy, France, Switzerland, and even the seat of the Roman Catholic Church. Between the C15th and the C18th, an estimated 50,000+ convictions and executions of suspected witches were made in the western world. Witchcraft however ceased to be an act punishable by law in the late 18th century, and by the close of the 19th century, the lynching of suspected witches had completely died away in the West, thanks to the advancement and influence of science and technology.

Unfortunately however, while witch-hunting is a thing of the past in the entire western world, the horrific practice (the lynching of people accused of being witches and wizards) sadly appears to be on the increase in sub-Saharan Africa, particularly Kenya, Uganda, Ghana, Tanzania, South Africa, Cameroon, Nigeria, the Gambia, Zambia, Sierra Leone, Malawi, Angola, and DR Congo. Amnesty International reports that in 2009 about 1,000 people were arrested in the Gambia by government-sponsored witch-doctors on charges of witchcraft, and held in detention centres where they were forced to drink poisonous potions. In places like Cameroon and Malawi, witchcraft remains a criminal offense; hence, witchcraft accusations are allowed in courts. It is reported that between September and November 2009 at least three people were jailed for up to five years (with hard labour) on witchcraft charges by magistrates in Malawi.

Witchcraft belief and the practice of witch-hunting are dominant in poor rural communities. It is alleged that in Kenya's village of Kisii, people killed on witchcraft allegations are mostly old women and men; as a result, there are very few elderly people left in the village. Witch-hunts against children have also been reported in many parts of Africa, including Ghana, Nigeria, the Congo and Tanzania. In Tanzania for instance, women and children with red eyes and wrinkled faces are usually accused of being witches and accordingly persecuted.

The truth is that in their desperation to be freed from the claws of their assailants (including “exorcists”), some suspected witches make false confessions, admitting to their involvement in countless deaths and calamities some of which occurred long before they (the suspected witches) were even born. Yet their so-called confessions are taken serious. Suspects with questionable mental health which to some extent is associated with old age are also likely to make such false confessions. Pathetically, in almost all cases of “witch confessions” none of the witch-hunters makes the effort to establish the authenticity of these claims.

A number of factors could be named for the prevalence of witchcraft accusations in Africa. One of the major factors is the desperation of Africans to find easy explanations or interpretations to all the phenomena (especially tragic ones) that seem to be beyond the efficacy of physical causes, and are thus difficult to be subjected to empirical investigation. Belief in witchcraft obviously presents a framework for people to explain the occurrence of otherwise random misfortunes such as, the premature death of young persons, sicknesses, accidents, business failure, abject poverty, infertility, famine and drought, etc. Those who believe in witchcraft feel they have less control over their own lives and often feel victimized by supernatural forces or some instruments of darkness. So when a pregnancy results in miscarriage, it is that old lady in the family who has consumed the baby (the foetus) in the spiritual realm; when a young man loses his job and struggles to make ends meet unlike his mates, it is that auntie who is the cause of his predicament; when a young person dies just when he/she is about to achieve fame and/or financial success, it is the grandmother with wrinkled face who has bewitched them; when a man is repatriated from the western world, his sister is accused of knowing something about it; when siblings die in quick succession, the ABUSUAPANYINI (head of the family) is accused of causing the tragedy; etc., even when reason and common sense allude to the contrary.

In my home city of Offinso, there is an uncompleted building which I understand was started long before I first saw the light of day; interestingly, it is still yet to be completed. Rumour has it that the owner died soon after starting the project; a younger sibling who tried to continue what his elder brother began, also died within months. Their uncle planned to complete the building when his cocoa beans were sold, but before the proceeds from the cocoa could reach him, he was down with stroke. The general belief is that these extraordinary phenomena were the doings of a wizard in their family. Now the uncompleted building is completely abandoned and taken over by weeds even though the alleged wizard died over twenty years ago. No member of the family is bold enough to complete it or even demolish it. That place is now called SIKA TWAO (meaning, complete waste of money).

Illiteracy and ignorance are clearly the root cause of the escalation of witch-hunting in Africa. However, this unfounded and dreaded belief is considerably encouraged, reinforced and made more solid by some religious leaders, chiefly preachers or pastors of Pentecostal or Charismatic churches, as well as the so-called witch-doctors, witch-finders or witch-smellers who claim to have the power to identify suspects. Many pastors frequently organize deliverance sessions to cast out the demons in suspected witches. During normal church services, some pastors go round placing their hands on the forehead of some of their flocks and deliberately pushing them onto the ground, all in the name of deliverance. They create the impression that anyone who falls during prayer and deliverance sessions is a witch or possessed, and because most women are not strong enough to withstand the push and remain on their feet, they are usually accused of being witches.

How long are we going to be spectators of the burnings and horrible killings of innocent people, and not participants in the fight against the despicable practice? How long will we fold our arms or stand akimbo and watch money-conscious and substandard elements like fake exorcists, “witch-finders” and over-superstitious mob sign the death warrant of innocent souls? How long are we going to continue to allow the so-called witch-doctors to force alleged witches and wizards to drink poisonous “magic concoction”? How long are we going to remain idle, ignoring the urgent need to educate the populace about the groundlessness of the belief in witchcraft? How many lives do we want to expire before persecutors and killers of alleged witches and wizards are arraigned and made to atone for their hideous crimes?

The time has come for leaders and people of the African continent to stand up and wage war against this primitive belief and the atrocious crimes against suspected witches. It is the duty of African governments to defend, promote, and protect the fundamental rights of their citizens which include the rights to life and to be protected. It is about time they adopted concrete measures to stamp out witch-hunting and related human rights violations.

My heart bleeds! It bleeds profusely and calls for justice for lynched suspected witches and wizards.

MAY GOD BLESS AFRICA
Emmanuel Sarpong Owusu-Ansah (aka Black Power) is a lecturer and an investigative journalist in London, UK. He is the author of 'Fourth Phase of Enslavement: unveiling the plight of African immigrants in the West'. He may be contacted via email ([email protected]).