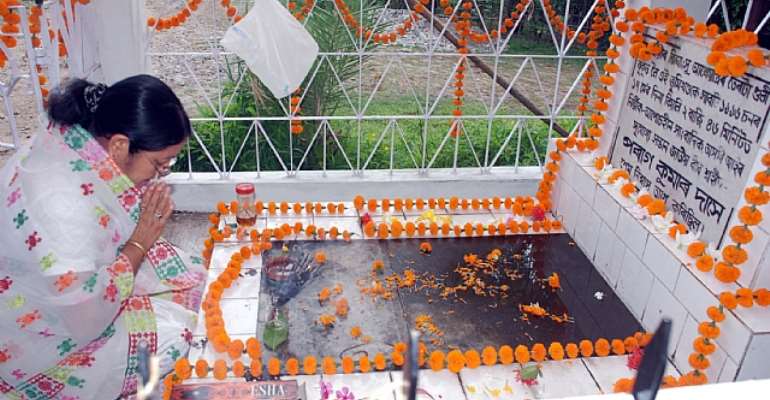 I wait for the day (May 17) every year with all pain and expectations.

The pain of losing my son and waiting for justice for years, but I still hope (against hope) that one day our family (and all well

wishers) will get the news that the killers of Parag Kumar Das have been convicted and punished – a thin old lady lamented while remembering his son. The mother Aupama Das and her brave journalist-right activist son Parag, who are known to every one in Assam, a troubled State of Northeast India, remain in the local media for decades.

Every year, while the media, civil society and advocacy groups of the region remember Parag on May 17, his mother makes a brief statement expressing her never ending sorrow and grief. The authority, investigative agency and the judiciary of India have failed till today to nab the culprits who killed Parag in 1996 in Guwahati. The journalist was attacked in broad day light when he was heading for his residence with his school going son.

A pathetic scene prevailed once again at Rajgarh locality of the city, where Parag was brutally killed, during a function to remember the courageous journalist and outspoken human rights activist. Organized by Manab Adhikar Sangram Samity, the meeting was attended by host of right activists, media persons and conscious citizens.

In fact, the killing of Parag and its aftermath remained in the mainstream media for many years. The executive editor of 'Asomiya Pratidin', a largely circulated Assamese daily newspaper from Guwahati, Parag was shot dead by four surrendered militants on May 17, 1996. The assassination prompted huge public outcries against the authority, as Parag used to write series of articles criticizing the Union Indian government for its 'undemocratic and exploiting' attitude towards Assam and the Northeast.

The former manager of Guwahati Stock Exchange, Parag was also leading MASS, a human rights organization and continued the frontal attack against New Delhi for its 'brutal exercise' on the indigenous people of the region through its various anti-insurgency operations (against the United Liberation Front of Assam and other armed groups).

Initially the case was investigated by the State investigative agency, but later it was handed over to the CBI following the growing demands from various civil society and advocacy groups. The investigative agency submitted its charge sheet in the Kamrup District and Sessions Court, Guwahati against four accused, incidentally all were former members of ULFA. But before it filed the charge sheet in 2001, two accused (Diganta Baruah and Tapan Dutta) were already killed in the encounter. Later another accused Nayan Das lost his life in 2003 at the hands of a furious mob.

The lone surviving prime accused in the case was Mridul Phukan, who got acquittal from the Kamrup district and sessions judge on July 28,

2009 on the ground of lack of solid evidence. The court however pulled up the investigative agency for its incompetent investigation of the case.

The acquittal of Mridul Phukan because of the CBI's inefficiency created enormous public resentments against the CBI and once again the issue drew extraordinary media attention. A general strike (Bandh) in Assam was also called on July 30 against the investigative agency, where some State based journalist organizations actively joined in it.

Even the International Federation of Journalists also came out with dismay over the acquittal of Mridul Phukan. In an official statement, the IFJ Asia-Pacific director Jacqueline Park said, “We are deeply saddened that despite the lapse of so many years, justice has not been done for the slain editor.”

The CBI was understood to appeal in the higher court against the lower court verdict as a regular practice. But the investigating agency remained reluctant to initiate for the fresh appeal. Frustrated with the development, the next of kin of Parag knocked the door of Gauhati High Court seeking justice. The higher court admitted a revision petition challenging the verdict of the Kamrup district and sessions court responding to a letter of Prof Deba Prasad Barooah, where the former VC of Gauhati University alleged that the CBI did not investigate the case properly. The family members of Parag also moved the higher court against the verdict.

Meanwhile, the journalists' organizations renewed their appeal to the people to hand over to the family of Parag any conclusive or useful proofs that could strengthen the case against the accused in the higher court. They also urge for a special investigation team, keeping in view the loopholes left by the CBI in its charge-sheet, which should be constituted and monitored by the higher court to go into the case and trace the culprit.