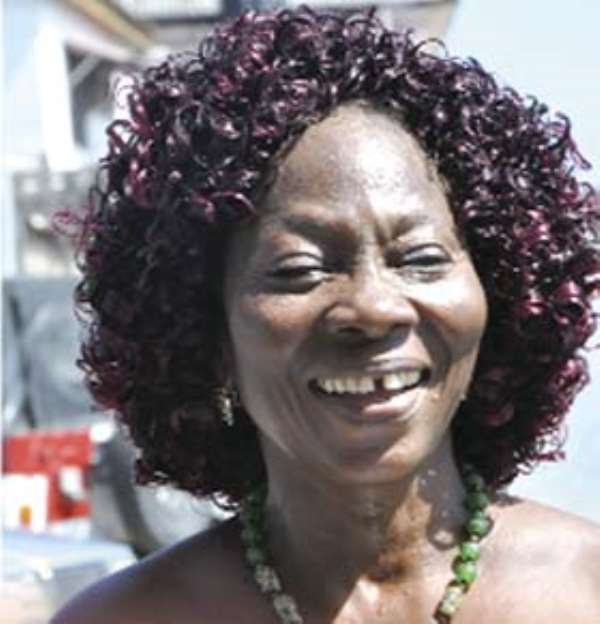 Former NPP Member of Parliament for Builsa North constituency, Agnes Asangalisa Chigabatia, is the first parliamentary candidate to be elected by the expanded delegates of the New Patriotic Party (NPP) for the 2012 parliamentary elections.

Madam Chigabatia, former Upper East Regional chairperson of the party, was elected yesterday to represent the NPP for the Builsa seat once again.

Her election comes a day ahead of the simultaneous nationwide NPP parliamentary primaries.

The constituency had to hold its primary yesterday to avoid a clash with the final funeral rites of the late overlord of the Builsa Traditional Area, Naab Dr. Ayeta Azantilow, who died in 2006.

Madam Chigabatia polled 172 votes out of a total of 362 to emerge winner over a former District Chief Executive for the Builsa District and a private legal practitioner, Thomas Alonsi, who polled 116 votes.

The Builsa District Manager of the National Health Insurance Scheme, Morris James Abakisi, had 70 votes, and four of the votes were rejected.

At the Builsa South constituency, a civil servant, Paulina Morton-Bruce was declared winner by popular acclamation in the presence of about 300 delegates, since she went unopposed.

Both women, in separate interviews, called for unity among party members in their constituencies to ensure that the party wins the two seats.

The Upper East Regional Organizer of the NPP, Yaw Mort, who supervised activities at Builsa North, told DAILY GUIDE that the exercise was peaceful as expected and hoped this would be replicated in other constituencies today.

He said the selection of the two women was an indication that Ghanaians were beginning to see the need to accept women in the political arena.

Meanwhile, delegates in the Bawku Central constituency will have the opportunity to witness the acclamation of the unopposed NPP candidate for the area, Adamu Sakande Daramani.

The same will happen in Bongo where Mrs. Diana Aburiya, a lecturer at the Bolgatanga Polytechnic, will be going unopposed.

Pusiga Constituency will see Mohammed Imoro Sako and Sumaila Abdul-Rahaman contesting for the slot, as the incumbent MP for Chiana-Paga constituency, Leo Kaba will be contesting against Clement Pandore.

In Garu-Tempane constituency, a former Upper East Regional Minister, Alhassan Samari will pitch his strength against Abugre Paul Azumah; while former Bawku Municipal Chief Executive and a Chartered Accountant, Abdulai Abanga, takes on the incumbent Member of Parliament for Binduri, Stephen Yakubu for the seat.

The Member of Parliament for Navrongo Central, Joseph Kofi Adda will seek to represent the NPP in 2012 with Abdulah Otito Achuliwor, the younger brother of a former MP, John Achuliwor, who died in an accident while he was still in Parliament.

In Tema, the Electoral Commission (EC) has declared that all is set for the parliamentary primaries where over 114 delegates are expected to vote to elect candidates for Tema metropolitan area.

The District Officer at the EC office in Tema, Gabriel Manu told DAILY GUIDE that his outfit had dispatched all voting materials to all the polling centres for the exercise 'except the ballot papers which we are yet to take delivery of'.

The District Officer explained that delegates would be called from a voters' register purposely compiled for the exercise and be identified using a photo album before exercising their franchise.

According to him, the three constituency centres in the metropolis are Kpone Katamanso- Appiah Centre, Tema West-WAEC Hall Community 5 and Tema East-Subin Valley Community 7.

There will also be an acclamation for Irene Naa-Torshie Addo for Tema West constituency.

The NPP flagbearer and National Chairman, Nana Addo Dankwa Akufo-Addo and    Jake Otanka Obetsebi-Lamptey, have extended their best wishes to all the parliamentary candidates and delegates who will take part in today's parliamentary primaries in constituencies across the country.

'We have had a very successful period of rebuilding after the 2008 general elections. The party's constitutional amendments of 2009 led to significant expansion of our electoral colleges for the election of party officers, parliamentary candidates and presidential candidate.

The entire nation bears testimony to the efficient, peaceful and successful manner in which the party and its membership conducted themselves during all these elections,' the statement said.

Last August, over 107,000 delegates cast their votes in the national congress to elect the 2012 presidential candidate, a massive jump from about 2,300 delegates, previously.

'That impressive contest, the first of its kind anywhere in Africa, took place simultaneously in all constituencies nationwide and without any negative incident. The nearly 80 percent endorsement for the 2012 Presidential Candidate was a strong message about a national party united behind its leadership,' it added.

These parliamentary primaries, the NPP said, are the last of the necessary internal party contests in preparation towards 2012.

'All the successes and improvements we have made so far as a party since 2008 may come to nothing if we do not conduct these upcoming parliamentary primaries with the same kind of competence, maturity, spirit de corps and unity of purpose.

'The ultimate objective is winning power in 2012 to deliver for the Ghanaian people a brighter future and enhanced governance. We should all be guided by this.

'Let us have healthy primaries and continue to show to the country that we are a united force, deserving of their mandate,' the statement emphasised.

The NPP says all transportation allowance for delegates has been forwarded to their constituency accounts.

'All delegates should therefore get in touch with their Constituency Chairmen or Treasurer for payment of their allowances,' Esther Dzifa Ofori, National Treasurer, has said.