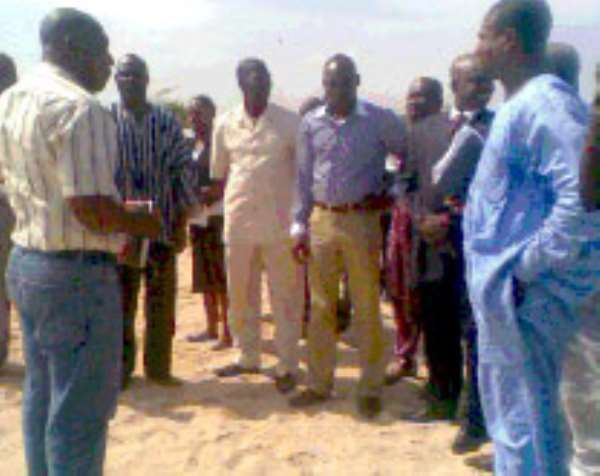 The construction of a 67 million Euros sea defence wall along Ada coastline  in the Dangbe East District of the Greater Accra Region would begin in January next year.

The project being undertaken by Dredging International Service from Cyprus, experts in marine and waterways construction is expected to be completed in 2013, barring any unforeseen challenges.

This came to light when a delegation from the Parliamentary Select Committee on Water Resources, Works and Housing, led by its Chairman, Nii Amasah Namoale, visited Ada on Thursday to familiarise itself with the 'Ada Coastal Protection Urgent Measures'; a project aimed at reclaiming about 5,000 metres of lost land, whilst saving lives and properties from the destructive effect of the sea along the coastline of Ada.

Briefing the delegation on the project, the Deputy Director (Hydro), Ministry of Water Resources, Works and Housing, Hubert Osei-Wusuansa, said plans were far advanced to begin construction of the project in January 2011.

According to him, design of the project was at its final stage, and would be completed in December, to pave the way for the construction of the sea defense wall.

'Work is on schedule, and the contractor is ready and waiting for the final design to begin construction of the project,' he said.

He said consultancy by the contractor had been done, including measurement of the site and the acquisition of data for the construction works.

Other activities, which have been completed, according to Osei-Wusuansa, include preliminary construction of site offices, general construction works, and the preparation of quarries for the supply of amour rocks.

The amour rocks are expected to be laid into the sea, at a distance similar (200m) to that of the Keta sea defense wall, said Osei-Wusuansa.

Additional rocks are to be laid at desired distances, where the groins are expected to be filled with sand dredged from the estuary, thus where the Lake Volta meets the sea.

However, Osei-Wusuansa was quick to add that the dimensions of the groins would be determined by the final design of the project.

Nii Amasah Nomoale, who is also the National Democratic Congress (NDC) Member of Parliament (MP) for Dade Kotopon, expressed the hope that work would begin as planned, in order to save lives and properties along the coastline of Ada.

'The whole coastal stretch is under threat now, and work must soon commence to save the people from further harm', noted Nii Amasah Namoale.

The delegation was also taken round to inspect the preliminary construction of site offices of the project contractor, Dredging International.

The devastating sea erosion has been a threat to the coastline of Ada for about five decades claiming lands and destroying properties.

Forts, prisons, and other monuments constructed by the colonial government, have already been engulfed by the sea.

The Chief Fisherman of Azizanya, Torgbui Akrofi Kabu, recently told nyu.edu that ten miles into the sea used to be dry land, and that was where they lived, but today, the story is different, as there are no lands on which farm anymore.

Also, the Minister for Education, Alex Tettey Enyo, in a recent GNA publication, said over 5,000 metres of land had been sub-merged, and that if the remaining land, which is a little bit above sea level, is washed away, in a matter of days, the whole Ada land would be submerged.

The Director of Radio Ada, Kofi Larweh, also told nyu.edu that research conducted in the area revealed that at least two metres of land is lost to the sea every week, at certain times of the year. 'If this phenomenon continues, very soon, the whole of Ada will be washed away,' he argued.

However, nyu.edu, in a recent publication, said the threat was not only from the sea, but also ejection from land owners who find the site more appropriate for the hospitality industry, hotels and chalets.