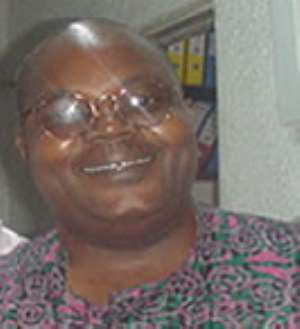 The Serious Fraud Office (SFO), has commenced investigations into how a Government of Ghana (GOG) shares held in Unilever (Gh) Limited amounting to over ¢681 million, was ordered to be sold and the proceeds allegedly paid to Mr Victor Selormey, a former Deputy Minister of Finance.

The payments which were made in two tranches include an amount of ¢81 million representing sale of 50,000 shares, which is the first instalment, and the second amounting to ¢600 million. The second instalment is the proceeds from the sale of 325,000 shares in Unilever. The total amount to date, i.e., ¢681 million has not been accounted for. However, Unilever had already paid cheques through the stock brokers.

Strategic African Security (SAS) in 1998, acting per a letter signed in 1997 by the jailed former Deputy Finance Minister.

Selormey, according to Guide’s information, arrived to explain some aspects of the shares sales transaction to the SFO investigators at the SFO headquarters in Accra yesterday under guard by two warders – prisons officers one of whom was armed to the teeth and stood sentry at the Old Parliament House while Selormey was being interrogated.

After the brief meeting, Selormey was asked to wait at the main front-desk (reception) and this reporter who happened to be investigating an unrelated story, chanced upon a fragile Selormey dosing off.

He refused to talk to Guide when this reporter approached him and enquired about his health as well as his mission at the SFO. Investigations

The SFO according to Guide’s information wants to find out whether the money was paid to government chest and utilised in the interest of the Ghana Government or has gone AWOL (missing in action).

On his part, Selormey is said to have told the SFO investigators that since the cheque was written to Government, it might have been paid; but the SFO, according to our findings, insisted that it wants to know the account into which the money was paid and what it was used for.

Selormey who is currently serving an eight-year jail term in connection with fraud he committed in connection with the courts computerisation project, was invited to the SFO office yesterday to assist them in their investigations into how a 375,000 National Board for Small-Scale Industries (NBSSI) shares in Unilever, was disposed of on the Ghana Stock Exchange. The stock brokerage was done by Strategic African Securities (SAS) a security discount firm which had been retained as Government Stock Brokers in the mid 90s.

The source hinted that sometime in 1997, Selormey as deputy Finance minister, wrote to the Strategic African Securities a stock brokerage and discount house in Accra, and informed them that the Ghana State Enterprises Development Commission (GEDC) shares in Unilever with the GEDC were missing. He, therefore, allegedly asked the SAS to issue a new share certificate to cover the Ghana Government’s 375,000 shares in Unilever (Gh) Limited.

Selormey’s strategem, according to the source, was to cause the share certificates to be transferred to SAS, after which it was sold on the GSE and the proceeds paid to the Government of Ghana on a letter addressed in the name of Victor Selormey, the Deputy Finance Minister.

Subsequently SAS issued new shares and when the dividends from Unilever matured, they, Unilever, paid cheque to SAS which was allegedly addressed in the name of Selormey, thus making it difficult for government to access the dividend through the NBSSI which was by then, holding the shares in trust for the Ghana Government and was using it as a staff welfare package.

In view of the missing dividends since 1997, the NBSSI has been finding it difficult to provide its staff welfare package. This is because Unilever no longer paid their due dividend to them but rather to an unknown account, the ownership of which the SFO’s initial investigations, hopes to unravel, said the source.

When the ¢600 million which is the last instalment was made, the SAS wrote a letter to inform Selormey, who was then the Deputy Minister of Finance, about it and that was the end of Unilever dividends to NBSSI.

The source which confirmed this anomaly to Guide explained that the reason why the SFO invited him (Selormey) was that it wants to find out whether the dividend was actually paid into government chest and what the money was used for.

This is because even if the shares were for Ghana, they were held in trust by the State Enterprises Development Commission and not by any particular individual on behalf of the government, the source made clear.

According to the source, what beats its imagination is the fact that instead of the sale of the shares proceeds being paid directly to an account held by government, information on the payment of the proceeds, are rather contained in a personal letter to Selormey since the letter authorising payment, was allegedly handed over directly to him (the former Deputy Minister). Findings

Investigations revealed that sometime in 1976 and in 1977, the Commission bought 375,000 ordinary shares from Unilever (Gh) Ltd, and was issued with a share certificate No. 3946.

Investigations also revealed that between 1994 and 1997, NBSSI received dividends amounting to ¢121,162,800 as investment from the venture.

Returns or dividends from the said investment over the years were paid by Unilever and received by the NBSSI until 1997.

This development, according to Guide’s investigations, made the management and staff of the NBSSI unhappy because the dividends which their 375,000 shares in Unilever) earned for them was used as a staff welfare package to grant loans for acquisition of cars, payments of rent advances, salary advances and IOUs but because of the alleged anomaly, such facility were cancelled and to date, it has become dreary working for the NBSSI.

Before the unusual development, in March each year, the multi-national company, Unilever, did invite the NBSSI to a shareholders meeting and by August of the year, the Board, i.e., NBSSI received its share dividends from Unilever, said the source.

It continued that in 1998, the Board did not receive any invitation to a Unilever share holders’ meeting and did not also receive any dividend which made them (NBSSI) suspicious.

This is confirmed in a statement Mr Peter Kwadwo Akomaning, a former Executive Director of the NBSSI is said to have given the SFO investigators. Facts

In March 1991, the Government of Ghana merged the State Enterprises Development Commission (GEDC) with the National Board for Small-Scale Industries (NBSSI). This means that the GEDC ceased to exist.