Man pulls plane with his eyelids 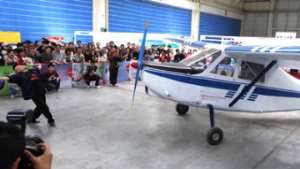 
A Chinese martial arts expert pulled an aeroplane for five metres - by a rope hooked to his eyelids.

It took him less than a minute to pull the half-a-tonne aircraft for five metres.

Dong has been practicing kung fu for nearly 40 years, and has collected numerous awards for his skills.

"I have pulled a car with my eyelids before but this was the first time with an aeroplane," he said.

"To be honest, I didn't use my full strength and I think I could probably pull it three times the distance.

"I have built up the body strength to do this but it would be very dangerous for ordinary people so I don't want anyone to copy me."

Teachers are the bedrock of our transformational education r...
9 minutes ago