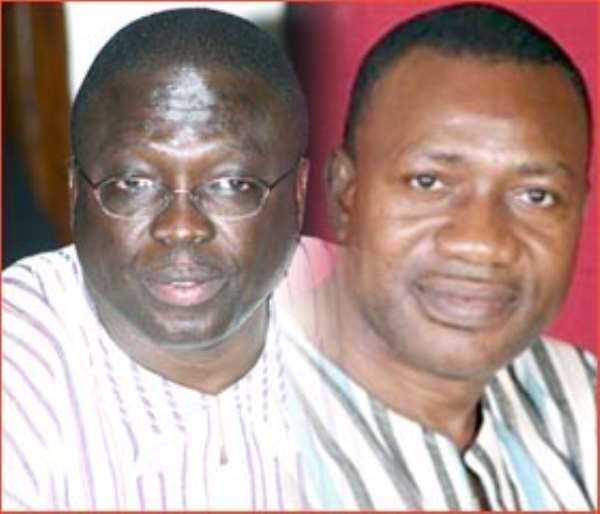 In his maiden cabinet reshuffle since assuming power a little over a year ago, President John Evans Atta Mills has offered his critics another opportunity to reassess his ministers, as he makes far-reaching changes including outright dismissals.

The new team, which will replace his below-average Team B members, include critics of his administration such as Alban Bagbin and Enoch Teye Mensah.

The Information Minister, Zita Sabah Okaikoi, whose name became synonymous with an imminent reshuffle in the media, has not been fired as was speculated, but moved from her portfolio to the relatively “softer” Tourism Ministry.

The final decision to maintain the lady was preceded by a number of considerations over who replaces her. A number of names were put forth but eventually, John Akolgo Tia is the man bestowed with the responsibility for the Information Ministry.

Ayariga described the office as a creation of the previous government which the incumbent finds repugnant and therefore abolishing it forthwith.

The Minister of Information would henceforth speak for government and the presidency, a directive which casts a cloud over the position of Director of Communications at the Presidency, held by Koku Anyidoho.

Not even the intervention of Mahama Ayariga could clear the doubts about the fate of Koku Anyidoho as he appears to be treading cautiously when explaining the seeming overhauling of the communications machinery of government.

Whether Koku Anyidoho would remain at the Castle maintaining the status quo, is a matter which would be left to media speculations, especially since Ayariga would prefer to steer clear of the minefield, given the no-love-lost relationship between them.

The Bawku boy, Hon Mahama Ayariga, heads for the Ministry of Trade as a deputy minister by the new arrangement.

The Prampram man and one of the longest-serving MPs on the NDC side, E.T. Mensah, has bounced back as Employment and Social Welfare Minister, fueling speculations that President Mills appears to be succumbing to demands that he engages more Rawlings apologists.

The changes, coming on the heels of the recently-held national congress of the party in Tamale, offers ample food for thought, with the obvious win for the pro-Rawlings segment.

The Youth and Sports Ministry has witnessed an unexpected change with. Akua Sena Dansua taking over the minefield from Hon Rashid Pelpuo.

The Wa boy, a royal, who was appointed Sports Minister following the disastrous fall of Mohammed Muntaka Mubarak, is said to have soiled his fingers with the messy chieftaincy affair that has engulfed the Upper West capital.

This is the first time a woman will preside over the male-dominated ministry, with its attendant challenges.

Rashid Pelpuo is going to Parliament as deputy Majority Leader.

Taking over the Women and Children's Ministry from Akua Dansua is Juliana Azumah-Mensah who packs her files from the Tourism Ministry to give way to Zita.

President Mills has been wary of the wrath of feminists who have not minced words about their dissatisfaction with his failure to live up to his promise of offering them 40 percent positions in his government.

Having failed to live up to their expectation, the last thing they would expect is the reduction of what for them is a below average figure.

As for the Northern Regional Minister, Stephen Sumana Nayina, the signs were too glaring to be ignored that he might not last as a minister.

He has been fired and his position given to his deputy Hon Moses Bukari Babengba, one-time MP for the Saboba/Chereponi constituency.

Hon Alban Sumani Kingsford Bagbin, Majority Leader, now heads the Ministry of Water Resources, Works and Housing as his position in Parliament goes to Hon. Cletus Avoka, Interior Minister, who has been under constant criticisms from a faction in the Bawku conflict.

Hon. Bagbin's remarks about those he described as bootlickers and fair-weather friends surrounding President Mills, continues to resonate across the political turf.

When NDC members showed their allegiances, he was one person who did not hide his loyalty to the Rawlings camp by piling heat on the President.

The outgoing Works and Housing Minister, Albert Abongo, speculators state, has not been on good terms with his deputy minister, Hannah Bissiw, a lady who draws her power from Ridge.

Interestingly, the Interior Ministry would still be maintained by a Kusasi man in the person of Martin Amidu, a former deputy Attorney General and 2000 running mate of then Candidate Mills.

Critics of the management of the Bawku ethnic conflict have incessantly expressed concern about the appointment of Cletus Avoka, who hails from the area, as head of the Interior Ministry.That the same portfolio now goes to another Bawku boy, is beyond the ken of political observers.

President Mills reportedly met the ministers affected by the shake-up on one-on-one basis during which he explained the decision, and where he had to render the diplomatic gratitude, he did so.

Considering the spread of the reshuffle, it could be concluded that Rawlings' apologists would have no cause to complain about being ignored in the offer of appointments.

As to whether the new team would be upgraded to a higher status, given the previous one's below average description by Mills' antagonists, is yet to be seen. More ministers will go DAILY GUIDE has learnt.