EFFECTS OF ETHNICITY AND CHIEFTAINCY ON THE 2008 ELECTIONS IN GHANA 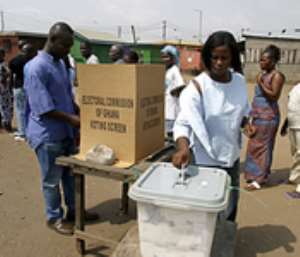 After the elections, a whole lot of reasons started flowing as to why the NDC won in all of the Gonja constituencies of northern Ghana in both the Presidential and Parliamentary elections.

Some of the reasons given included the fact that, the electorate in the Gonja constituencies like any other electorate in Ghana were swept down their feet by the yeresesem (change) aroma which became very popular with the NDC.

Others also said the electorate saw hope in the manifesto and messages of the NDC more than the New Patriotic Party (NPP) which was the party in government and did not do much for the people in their view.

Another school of thought was of the view that, infighting within the NPP as a party couple with factionalism that emerged at all levels of the NPP had a ripple effect on the electorate In the Gonja constituencies and gave the NDC an advantage. Other views were also stated for the victory of the NDC in all the Gonja constituencies which can't be elaborated fully here.

However, a critical reason that is seen to have won the votes for the NDC In all the Gonja constituencies in both the Presidential and Parliamentary elections in the opinion of some other people was the choice of John Dramani Mahama as the running mate to the NDC presidential candidate John Mills. It must be explained that, until his nomination as the Vice-Presidential candidate of the NDC he was the Member of Parliament for the Bole-Bamboi constituency of northern region.

John Mahama is a Gonja by tribe and had held several other positions in the NDC until his choice as running mate of the NDC.

On the other hand, did the NDC allege promise to create a new region for the Gonjas have any effect on the voting behaviour of the electorate in the Gonja constituencies?

If it is to be limply assumed that, the electorate in the Gonja constituencies voted massively for the NDC because of the choice of a Son of Gonjaland as Vice-Presidential candidate, why didn't the electorate in the Mamprugu constituencies of the northern region vote for the NPP in the 2008 elections since the Vice-Presidential candidate of the NPP Mahamudu Bawumia is also a Son of Mampruguland?

In the Dagbon constituencies of northern Ghana, the NDC again won massively except in the Nanton Parliamentary election and the Presidential election in the Yendi constituency of northern Ghana. Can it be said that, the death of the overlord of Dagbon (The Yanaa) in March 2002 of which the government of the NPP was accused of avoidable complicity responsible for the bad performance of the NPP in that area?

It must be explained that, the conflict that lead to the death of the Yanaa and others involved members of the Abudu and Andani families of Dagbon who shares rotational succession to the Dagbon Namship.(Chieftaincy). The Andanis are generally believed to be in the Majority within the Dagbon constituencies and the late Yanaa was from that family.

On the other hand, did the promise of the NDC in its campaign manifesto of 2008 to find the killers of the Yanaa and bring lasting peace to Dagbon; something the NPP government was seen to be unable to achieve had an effect in favour of the NDC in the Dagbon constituencies?

Otherwise could it be said that, the general disunity in the NPP also had an impact on the voting behaviour of the electorate in the Dagbon constituencies 2008 elections?

I honestly would love to have the view of readers to the above issues. May I state that, comments I deem very relevant would be incorporated into a research I am currently conducting on the “Effects of ethnicity and chieftaincy on elections in Africa: The 2008 Presidential and Parliamentary elections in Ghana as a case study.

Readers should feel free to email their thoughts to me as well. Thanks friends let the opinions start flowing!