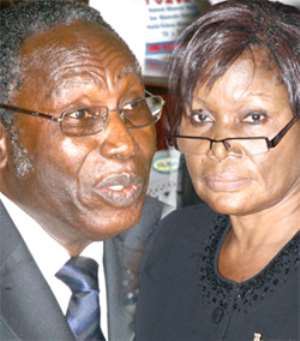 PARLIAMENT YESTERDAY unanimously approved President Atta Mills' nominees for the Supreme Court following the recommendations of the Appointments Committee of the Legislature.

The Justices who joined the highest Court of the land are Benjamin Teiko Aryeetey, Nasiru Sulemana Gbadegbe and Vida Akoto-Bamfo, bringing the number of judges at the Supreme Court to 14.

Justices of the Court of Appeal, the three were nominated by President Mills in accordance with Article 144 (2) of the 1992 Constitution on the advice of the Judicial Council and in consultation with the Council of State to be considered by Parliament for the Supreme Court.

Vacancy for the nomination of the three Justices was created following the death of Justice Prof. Tawiah Modibo Ocran, retirement of Justice Theodore Adzoe and the resignation of Justice F. Y. Kpegah last year, leaving only 11 Supreme Court Judges.

The new Supreme Court Judges have been on the Bench for decades, ranging from 20 years and above, with adjudication of several cases including both civil and criminal.

Born on June 14, 1941 and with just about two years left to go on retirement, Justice Benjamin Teiko Aryeetey has been on the Bench for the past 38 years.

He obtained his LLB degree from the University of Ghana in 1968 and further pursued a Post Graduate Certificate in Law at the same university.

Justice Aryeetey was appointed as a District Magistrate Grade 11in April 1971 where he rose through the ranks and was appointed a Justice of the High Court in 1989.

He was subsequently appointed a Justice of the Court of Appeal in 1999 where he has served until his promotion to the highest court.

Being on the Bench for the past 20 years, Justice Nasiru Sulemana Gbadegbe was born on December 8, 1950 and he obtained his LLB degree from the University of Ghana in 1973 and subsequently his Qualifying Certificate in Law in 1975 from the Ghana School of Law.

He was appointed a High Court Judge in 1989 and subsequently a Justice of the Court of Appeal in 1999 where he served until his elevation to the Supreme Court.

Justice Vida Akoto-Bamfo on the other hand was born on February 7, 1949 and has been on the Bench for the past 28 years.

She was awarded LLB Degree from the University of Ghana in June 1972 and in 1975, she acquired her Qualifying Certificate in Law at the Ghana Law School.

Justice Akoto-Bamfo was appointed a District Magistrate Grade 1 in 1981 where he rose through the ranks to become a High Court Judge in 1981 and subsequently appointed a Justice of the Court of Appeal in 1999.