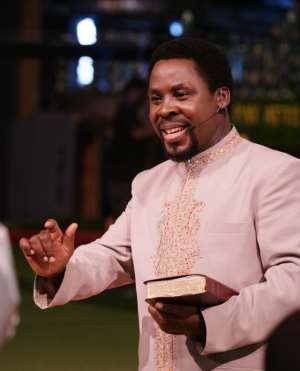 The recent revelations of TB Joshua's prophetic insight and instruction to Coach Sellas Tetteh regarding the Black Satellite's historic World Cup triumph have ignited a surprising storm of criticism, the news spreading like a proverbial fire across the nation with frenzied argument and dispute arising in its wake. A glance through the flood of heated responses posted on various online news sites seems to paint a unanimous picture, pointing to a profound principle: “What people don't understand, they criticise.”

Firstly, I think it is imperative to state that if you do not have a thorough knowledge of the ministry and antecedents of Pastor TB Joshua, it would be almost impossible to absorb or appreciate the uncanny accuracy of this prophetic revelation. From a purely rational angle based on worldly experience and exposure, it sounds either farcical, fraudulent or fabled. However, this sort of supernatural scenario and the ensuing controversy is not new to the Nigerian Pastor. From the onset of his ministry, he has persistently stepped out of the crowd and achieved unique feats that were consistently met with misjudgement and argument by some, as well as adulation and acclamation by others - just as it was in the time of Jesus Christ (John 7:12).

The common thread of questions that seem to throng Ghanaian minds in the light of this disclosure are: Why didn't Pastor Joshua choose help his own nation Nigeria who were disgraced in Egypt? What is his motive for unveiling such clips to the world? What on earth is he doing recording his phone call with Tetteh? What is God's interest in football? Some have also impertinently made untold demands of his prophetic gifting, as if it were a mere button you press to obtain instantaneous result.

I would like to address these points to the best of my ability. To begin with, prophecy does not originate or proceed from the will of any mortal man, nor is it the product of any reasoning factors or faculties (2 Peter 1:21). According to dictionary definitions, prophecyis an inspired declaration of divine will and purpose, foreknowledge of presently hidden things which cannot be known by the natural light of reason, the foretelling of the future through a direct revelation from God. It's not magic; it's not predetermined, nor is it something to be dished out according to individual will or wish. The prophet is not the instigator or the focus of a prophecy – he is simply a mouthpiece of God, a communicator between the visible and invisible.

TB Joshua's prophetic ministry did not begin last Friday in his discussion with Coach Tetteh. There have been numerous and verifiable records of his predictions coming to pass pertaining events of both national and international relevance. These include the death of iconic pop legend, Michael Jackson, the release of Ingrid Betancourt from the Colombian jungles, the recent plane crash in New York, amongst countless others. On the football front, he has accurately predicted the outcome of the last two Super Eagles qualifiers between Tunisia and Mozambique. Aside, each Sunday Service at The SCOAN unveils the remarkable prophetic gifting ministered by the Prophet to individuals who attend his church, with Joshua uncannily telling them intricate and accurate details about their lives, the solution furthermore provided. For those in doubt, his services are broadcast live on Emmanuel TV – raw, real and radical.

In respect of the recording, any viewer of Emmanuel TV would know that Prophet Joshua is a meticulous and emphatic keeper of records. I was astounded upon viewing clips of his early life and ministry in a documentary titled, 'My Testimony'. When an unknown and unkempt Joshua started his Synagogue with a mere 8 members, he called a cameraman and asked him to record it. Every single step of his ministry has record – down to when his church was destroyed thrice by the elements. From a logical viewpoint, it seems ludicrous, but it was inspired by the vision that one day people would see the record and glorify God for the extraordinary journey He has taken His servant on. The same vision that propelled Joshua to record his humble beginnings also prompted him to record his telephone conversations with Tetteh, for the same purpose of glorifying God and teaching the masses a vital and valuable lesson in faith and obedience. Joshua saw the vision and had such courage and confidence in its validity, for God had not failed him in times-past. Besides, if the record was not there – the same people criticising today would be liable to doubt, demanding for the evidence.

As for Joshua's motive, the answer correlates to the question of why the prophetic message involved football. Football is a proven powerful and practical force that unites people across age, faith, race and creed. The potential for people to submit their lives to Christ as a result of this prophecy is enormous – and without seeing, our generation without faith and hope would simply not believe, hence the need to unveil this record to the world. God's glory is paramount and forefront, not the messenger He chose to use in this particular instance. The notion of Joshua taking the glory for the Satellites victory is ridiculous. We all know the brilliance and resilience of our boys that saw them through the entirety of their games in Egypt to the trophy.

Now to the role of Ghanaian media, headlines such as 'SCANDAL: Tetteh confirms pastor made Ghana U20 team selection' are uncalled for and unrepresentative of what truly occurred. Both Joshua and Tetteh's roles and words are being distorted by media who want to unnecessarily hype up the scenario. Coach Tetteh sought to know the opinion of God concerning the final, knowing that God's opinion can guard and guide them against error and mistake. Upon hearing from God, Joshua revealed to him that no goal would be scored, penalties would determine the outcome and Dede Ayew should take the first penalty kick. Simple. This does not in any way undermine the Satellites skill and stamina, nor does it take away from Tetteh's coaching abilities and instincts. It only emphasises the importance of God in all facets of life, a revelation the Ghanaian president John Atta Mills can also testify to. In his own case, he sought the mind of God before election time, and Joshua told him there would be three elections and the results would be announced in January. Both individuals sought to know the mind of God from His servant, it was revealed – and they came to pass, to the glory of God and the good of Ghana. In any case, anyone watching the final cannot deny God's involvement - the higher hand seeming to guard the Ghanaian posts and frustrate every Brazilian attempt on goal, even against 10-man Ghana.

I would advise all still doubting to watch Joshua's television station: Emmanuel TV and judge for yourself. To the blind critics, consider the words of a wise man: “Leave these men alone! Let them go! For if their purpose or activity is of human origin, it will fail. But if it is from God, you will not be able to stop these men; you will only find yourselves fighting against God." (Acts 5:38-39)