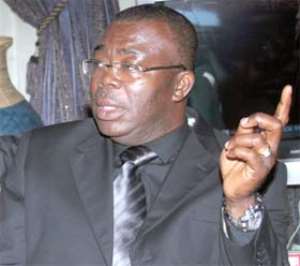 THE FORMER MINISTER for Information and National Orientation, Stephen Asamoah-Boateng was yesterday charged in absentia at an Accra Fast Track High Court for allegedly breaching the Procurement Act.

The Former Minister, affectionately called Asabee, who had been detained since Thursday by officials of the Bureau of National Investigations (BNI), was kept away from court yesterday, but sources said he had been charged together with his wife Zuleika, Frank Agyekum, Chief Director of the Ministry, Mr Sampong and two others with conspiracy to commit crime.

The particulars of offence, according to sources, suggested that the accused persons allegedly conspired to breach the Procurement Act by not following due process in obtaining a contract amounting to GH¢80,600 for renovation works at the Ministry of Information.

Even though six persons have been charged for the offence, only Asabee is being held in custody, raising questions about the motive of his arrest.

His wife, who was in court, did not even know she had been charged alongside her husband.

It was after the case had been adjourned that lawyers informed her on the new development.

According to Dr Anthony Akoto Osei, former Minister of State at the Ministry of Finance and Economic Planning, the wife was yet to get a copy of the charges leveled against her.

All the accused persons are to appear before Justice Charles Quist on Monday morning August 17,009.

Briefing the press about the outcome of an in-camera sitting after several hours of waiting for the arrival of the accused, Peter Okudzeto, one of the counsel for Asabee, disclosed that they could not obtain bail for the accused after the Attorney General charged their client because the judge noted that he was not in court.

According to him, the judge ordered that Mr. Asamoah-Boateng be brought to court on Monday morning for the case to be heard.

This meant that the former minister would spend the weekend in the custody of BNI till Monday morning.

Giving reasons why the accused was not brought to court, Willie Amarfio, another counsel for Asabee, disclosed that information gathered indicated that the BNI officials were bringing the accused to court but half way through, their Director allegedly asked the convoy to return to the headquarters.

He indicated that as at the time of speaking to the press, no reasons had been given as to why that u-turn was made.

Mr. Amarfio however noted that the BNI's failure to bring their client was a ploy for the accused to spend the weekend in cells.

Mr. Amarfio, who noted that Asabee's incarceration was unlawful, disclosed that no warrant was issued for his arrest and therefore pointed out that if “we come on Monday morning and they do not bring him to court, we would apply for a writ of Habeas Corpus to cite the Director of BNI to produce our client in court”.

Counsel disclosed that the charge sheet stated that the accused attempted to commit the crime, meaning the money was still in the coffers of the state. Therefore to him the charges did not make sense and would definitely fail.

Mr. Amarfio was worried that Asabee had not eaten anything since morning, saying it was bad for someone on medication.

He explained that the BNI officials offered the accused food but because he was suspicious of it, he did not accept it, and as a result of this when his family members also brought him food, the BNI officials refused to allow him to take the food.

After waiting till 3:45 pm without any sign of his coming, the prosecution, led by Anthony Gyanbiby, and defence led by Nene Amegatcher from Sammy Okudzeto Chambers, were called into the judge's chambers.

The crowd who became incensed after waiting for an additional 45 minutes without any signs of Asabee, began shouting, 'This is BNI Sakawa', believing that the action of the BNI was a diversionary tactic to deliberately drive away the supporters from the Headquarters.

Security personnel at the court were not many, but there was a police water cannon vehicle parked at the entrance of the Supreme Court building.