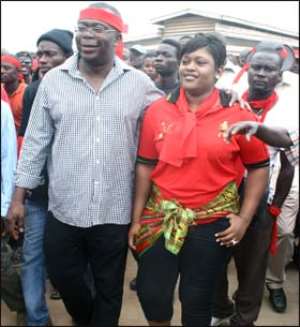 THERE WAS a wild scuffle at the Greater Accra Regional Office of the Bureau of National Investigations (BNI) when officers of the bureau physically pounced on former Information and National    Orientation Minister Stephen Asamoah-Boateng, dragged him away from his wife and lawyers and locked him up in their cells.

In the melee, a fracas ensued and Asabee, as he is affectionately called, fell to the ground as he was being dragged by his wife Zuleika on one side, and the BNI officers on the other.

The latter group won the 'tug of war' and forcibly shoved their captive into the cells after which they locked him up around 6.30pm.

His two lawyers were pushed to the ground and they tumbled on pretty-faced Zuleika who was sprawling on the floor. All three were lifted off their feet and thrown out of the BNI gates with an explanation that they had over stayed their time.

The locked-up politician had not been charged with any offence and his lawyers said they had no idea why he was being detained.

Unable to stomach the impunity of the BNI which is gradually gaining notoriety under the Mills administration, Minority Members of Parliament were moving to the regional office of the bureau at Kawukudi area to show solidarity with their former colleague and his wife at the time of going to press yesterday.

Mr. Asamoah-Boateng voluntarily submitted himself to the security agency yesterday morning following claims by government spokespersons that he was a wanted man and that he needed to make himself available to the operatives as a matter of urgency.

A few minutes before 11.00am yesterday, Asamoah-Boateng, in the company of his wife and their lawyers, Nene Amagatcher and Peter Okudzeto from Sammy Okudzeto Chambers, arrived at the Greater Accra office of the BNI near the 37 Military Hospital in Accra and after signing in, they were ushered into a waiting room.

At about 12:35 pm, a BNI operative informed the ex-Information Minister that he should move into another room for his interrogation, an instruction Asamoah-Boateng obeyed but went to the said room in the company of his lawyers.

The BNI operative however insisted that there was an “order from above” that the former Information Minister should not be interrogated in the presence of his lawyers.

This generated an argument between Asamoah-Boateng and the BNI officials as the ex-Information Minister insisted he would exercise his constitutional right to legal counsel during any sort of interrogation.

His counsel argued that since the 1992 Republican Constitution of Ghana surpasses all other laws of the land, Asamoah-Boateng had a prerogative to decide to exercise his right to legal counsel given him by the constitution.

Following the stand-off between the two teams, the BNI officials asked the former minister and his lawyers to return to the waiting room, where they were left unattended to until later in the evening when Asabee was locked up and his lawyers thrown out of the compound.

Asamoah-Boateng's counsel explained that the ex-Minister was making himself available to the bureau because of the claims from the government officials that he was a wanted man under investigation.

They insisted their client was not a subject of investigations and that he had neither been charged nor informed that he was being investigated for any offence.

For close to two months now, government had schemed to throw the hangman's noose around the neck of Mr. Asamoah Boateng over reports that an in-law of his had shares in a company that won a government contract last year.

Already, the Office of the President has ordered that the said company, Plexiform Ventures, should not be paid for the contract and the BNI has interrogated a number of persons over the matter, including Frank Agyekum, who signed the said contract  in his capacity as deputy Information Minister.

The ex-Minister and his family have also been physically prevented from leaving the country and in one instance, Asamoah-Boateng, his wife and two kids were on board British Airways Flight 078 ready to take off to Heathrow in London when the Pilot, Captain Remington, announced that the plane had been grounded by the government of Ghana through the BNI and would not be allowed to fly until the ex-Information Minister with his family is forced to disembark.