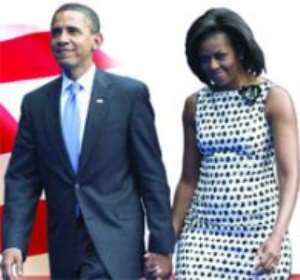 US President Barack Obama is expected to announce a major foreign policy for Africa during his historic two-day visit to Ghana, beginning Friday, July 10, 2009.

Although Mr Obama has made foreign policy pronouncements for some parts of the world since assuming office in January, this year, he is yet to make one for Africa, and his visit to the country, which the White House describes as “one of our most trusted partners in sub-Saharan Africa”, is expected to be used as a platform to unveil his foreign policy for Africa.

For Ghana, Obama's visit will be a celebration of another milestone in African history as it hosts the first-ever African-American President on this presidential visit to the continent of his father's birth.

The Air Force One, carrying the 44th American President, his wife, Michelle and two daughters, as well as a retinue of senior US government officials, is expected to touch down at the Kotoka International Airport at 8:30p.m. tomorrow amid tight security by US and Ghanaian security agents.

A red carpet reception, spiced with rich Ghanaian cultural performance, awaits Mr Obama and his entourage at the Jubilee Lounge of the airport and that warm embrace will give him a foretaste of the proverbial Ghanaian hospitality that he will be served with during the period of his visit.

A host of White House correspondents and international journalists are expected to accompany the world's most powerful personality; an ample signal that Ghana will come under global spotlight for the period of his stay in the country.

Ghana expects to take full advantage of the huge international exposure to boost its image, investment drive and tourist attractions, and rightly so, as the Foreign Minister has called on the international business community to take advantage of opportunities in the country to locate here.

Ahead of the visit, the National Security Council is co-ordinating a contingency security plan involving the various security agencies, but with the police as the key actors, to ensure success.

In line with the security measures, people carrying bags and unwarranted objects are forbidden from going near venues where Obama would be visiting, while indiscriminate motorbike riding and indiscipline by motorists on the roads would not be tolerated.

The recent exercise to clear the central business district and other parts of Accra of street hawkers and traders gives a vivid posture of official intolerance to general indiscipline before and during the visit of Mr Obama.

DSP Ofori appealed to motorists and the general public to cooperate with the security agencies to ensure the success of the visit.

The Ghana trip is the final leg of a three-nation tour by the US President, having breezed through Russia and Italy, where he attended the G8 Summit.

This will be the third time a sitting American President is visiting Ghana, after two similar visits by President William Jefferson Clinton in March 1998 and President George Walker Bush Jnr in February 2008.

The eight-hour visit by Clinton was the shortest, but by no means very significant, given the fact that he was the first sitting US President to step foot in Ghana, and as he later indicated, it was the most memorable foreign trip he ever made as President.

With two nights sleep and 36 hours stay in Ghana, President Bush's visit glows into huge significance as the longest of the three visits.

Spending one night and about 24 hours in Ghana, Mr Obama will not be spending as much time in the country as Bush did; he is also not the first of the three to visit, but undoubtedly, the significance and historic nature of his visit will dwarf those of Clinton and Bush.

Prior to the announcement of the Ghana trip, it was widely speculated that Mr Obama's first visit to Africa will be to Kenya, the land of his paternal ancestors.

However, Ghana's political pedigree as the first independent country in sub-Saharan Africa and kingpin of Africa's liberation struggle, as well as its recent exemplary strides in democracy, political stability and good governance, might have been compelling credentials that made it a preferred destination for Mr Obama, instead of his own fatherland.

That judgement by the White House will surely be greeted with tumultuous cheers by millions of Ghanaians on the streets of Accra and Cape Coast for a man they have so much affection for, even from the farthest distance.

Already, the anticipated euphoria is gaining great momentum with high patronage of Obama-branded clothes, T-shirts, various paraphernalia and even biscuits.

Mr Obama's expected visit to the Cape Coast Castle will enable him have a sense of the symbolic ties between Africa and Africans in the Diaspora; a relationship that is expected to present an emotional memory of the slave trade.

Tentatively, the iterinary of the American President, according to information from the Foreign Ministry, includes a visit to a health facility at La and an interaction with Parliament.

According to the White House, while in Ghana, Mr Obama would look forward to strengthening the US-Ghana relations and highlight the critical role that sound governance and civil society play in promoting sustainable development.

Coming at a time when the world economy is going through a downturn, President J. E. A. Mills and his guest are expected to hold bilateral talks on a wide range of issues, particularly the economies of the two countries.

Other issues likely to engage their attention include the review of existing US programmes in Ghana, such as the Africa Growth and Opportunity Act (AGOA), which allows Ghanaian businesses to export about 6,400 duty-free and quota-free commodities to the US market; the Millennium Challenge Account (MCA), and the Africa Financial Sector Initiative, which allows Ghana to access facilities at the US Exim Bank and the Overseas Private Investment Corporation (OPIC).

Others are the President's Malaria Initiative, the President's Emergency Plan for AIDS Relief (PEPFAR) and the African Growth Competitiveness Initiative aimed at supporting capacity development in international trade.

“The visit will afford us the opportunity to exchange views and explore ways of further strengthening cooperation in the areas of agriculture, health, education, infrastructure development, trade and investment for the mutual benefit of both countries,” Alhaji Mumuni indicated.

It is the expectation of Ghana's Foreign Minister that President Obama would continue with the positive programmes initiated by his predecessor “in order to put Africa on the path of accelerated development”.

On the flip side, however, the discovery of oil by Ghana will be an interesting subject for Mr Obama, considering the large quantity of oil America imports from the Gulf of Guinea.

The two leaders are also expected to discuss threats posed to Ghana's security by the activities of drug traffickers and measures to control them, as well as issues relating to peace and stability in Africa, particularly Darfur, Guinea Bissau, Cote d'Ivoire and Guinea.

There are speculations that President Obama might push for the establishment of a United States Africa Command (AFRICOM) in Ghana after his predecessor had failed to do so, but the Foreign Minister said such a proposal had not been put before the government.

“Should this happen, the government will take a decision based on the supreme interest of the nation,” he remarked.

At the end of his visit to Ghana in 2008, President Bush announced a $17 million package for Ghana to fight malaria and also left behind a terminology that fascinated many Ghanaians for many days afterwards.

At a joint press conference with former President Kufuor at the Castle, Osu, President Bush denied rumours that the US wanted to establish a military base in Ghana and to make himself clear, he said “That's baloney; or as we say in Texas, that's bull”.

As President Obama makes his historic visit to Ghana, the question on the lips and minds of many Ghanaians is “What is he bringing to or leaving with Ghana?”