Taming a rebel leader in Assam 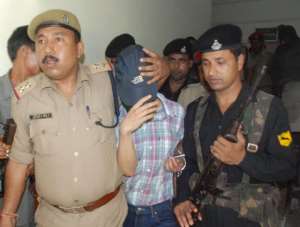 He is notorious, selfish but extremely health & beauty conscious-this

is how a tribal militant of Assam, Jewel Garlosa might be described.

Crime Branch of Bangalore police and the Assam police team in

Bangalore during the first week of June. Garlosa, who led Dima Halam

series of killing, extortion, kidnap and other criminal conspiracy in

the hills district.
According to Assam police, Garlosa led a militant's life but will all

spends thousands of rupees for healthcare and beauty treatment. Living

outside Assam, most of his time in Nepal with his third wife, Garlosa

tried to find a base in Bangladesh. He even contacted Ranjan Daimary,

the chief of NDFB, who is somewhere in southern Bangladesh and

initiated for his plan. The weapons for his outfit, was procured by

Garlosa from Burma through Mizoram.
The news of Garlosa's arrest (with his deputy commander Partha Warisa

and fund raiser Samir Rahman) from a reputed construction company

guesthouse on Bannerghatta Road in Bangalore was astonishing. As the

months, the general understanding was that Garlosa was camping in some

of his hideouts inside the district.
But soon after his arrest, the police disclosed that Garlosa was out

of the State for many months. It also revealed that Jewel was

operating from Kathmandu and he had a Nepali passport as well. Garlosa

came to the garden city for another fake passport. Following the

specific information, Srivastav sent a team led by the deputy

had to wait for a week there to nab Garlosa, who was coming down from

the Nepal capital.
From a lower middle class family of Haflong, the head quarter of NC

Hills, Garlosa materialized himself as a skilled armed leader to raise

Dimasa is a major ethnic group of NC Hills district, it gives shelter

to other communities like Zeme Naga, Kuki, Hmar and Karbi people. It

mainstream Assamese population.
The college drop out Garlosa (then he was named Mihir Barman) was

involved in Dimasa National Security Force (launched in 1993) and

later initiated to form the DHD in 1995. Till then most of the DNSF

members surrendered to the authority. After the split of DHD

(following the difference with the chairman Dilip Nunisa, who went for

a ceasefire agreement with New Delhi), Garlosa concentrated on the

Black Widow since 2006. He maintained cordial relationship with the

NSCN (I-M) and also the leaders of ULFA & NDFB.
The police suspect he has nearly 200 loyal armed cadres. With the

small group of cadres, Garlosa continued his disruptive activities in

the isolated hills district. The Black Widow is made responsible for

and murders by the DHD (J) cadres.
The cruelty of Garlosa was not confined to his opponents alone. His

former two wives were also exposed to atrocities by the militant

leader, who abandoned his first wife Champa Nunisa. Garlosa got his

second wife Bontha Thaosen killed in suspicion that she initiated an

extra marital relationship with an armed force personal. The third

Kathmandu.
While Garlosa was arrested in Bangalore, his closed associate Frankie

Dimasa was killed in Guwahati on the same night of June 4. Frankie,

an encounter. Three of his associates however succeeded in fleeing

with the cover of darkness.
Incidentally, the chief executive member of the NC Hills Autonomous

District Council Mohit Hojai was earlier arrested with the charge of

paying money to the Black Widow. Later another former CEM of the

Council Depolal Hojai and the joint director of social welfare

militants to procure arms.
New Delhi remained worried at the recent incidents of violence in the

hills district, where a nexus of politicians, bureaucrats and

militants had surfaced strongly. The nexus resulted in siphoning of a

large amount of money from the development funds to militant groups

operating in the region. The newly launched National Investigation

government agencies and the armed groups in the trouble-torn district;

By: Nava Thakuria
The author is a Guwahati, Assam based independent journalist and can

be contacted at [email protected]