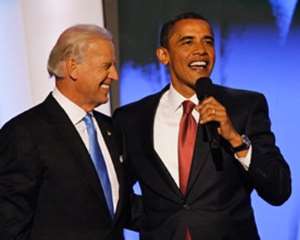 ARLINGTON, Va. — A group of about 100 people lined up at the corner of Quinn and Wilson Blvd., across the street from the small strip mall that is home to Ray's Hell Burger.

The man they were waiting to see emerged at 1:06 p.m. after dining with Vice President Joe Biden and won cheers from those in the crowd that could see him. Wearing white shirt-sleeves, President Barack Obama stood up on what appeared to be a car and waved.

The crowd cheered and clapped loudly and one person called for a speech.

But Obama was in his limo, and the motorcade was moving at 1:08 p.m.

Michael Landrum, the burger joint's owner, was ecstatic after the visit, calling it "one of the greatest days of my life."

"I guess he was missing some good food from Chicago," Landrum quipped.

The initial reaction of the other customers: "Madness," he said.

But eventually the crowd settled down and left Obama and Biden to their cheeseburgers, which they ate on a spare table with condiments and a paper towel roll just under the period horror movie posters that line the wall.

Obama purchased burgers not only for himself and Biden, but also for several members of the press pool that tailed him to lunch across the Potomac. Cheeseburgers at Ray's retail at $7.95, and Obama deposited a $5 bill in the tip jar.

With their lunches in hand, Obama and sat atop stools, like most of the other customers.

A few of those customers remained in the small, burgers-only joint to savor the moment and finish their meal after Obama left.

"I had lunch with the president," exclaimed Robert Gooch to nobody in particular.

A D.C.-area native, Gooch said he had never seen a president before.

Another customer proudly showed off the cell phone camera shot he took of the jacket-less Obama and Biden chowing down together.

Landrum went back behind the counter to keep pushing out burgers but took the time to greet another store owner in the small Rosslyn strip, just blocks from POLITICO world headquarters.

"That'll be the good for the center, won't it?" he asked with a smile.