African leaders and their love for luxury 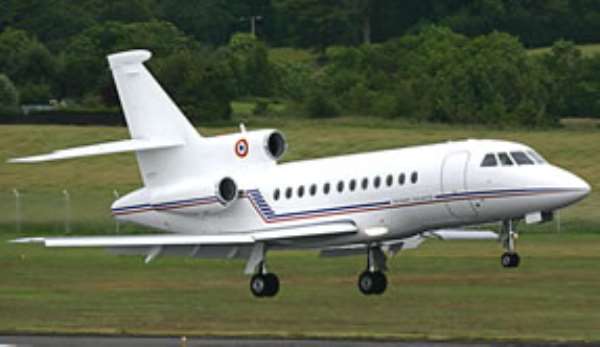 African leaders continue to live like pop stars. This display of vulgar opulence by Africa's vampire political elites, when juxtaposed against the pervasive poverty in the Continent is just one of the many things that qualify Africa as the most unpredictable continent in the world.

Today, this writer brings you a compilation of the make of the class of executive jets used by some of our leaders – there are also some vintage descriptions of some of the aircraft used by some of them. The writer is indebted to wikipedia for all the information.

The Botswana Defence Force operates a Gulfstream IV as a VIP transport.

The Ivorian government uses a Gulfstream IV (Registered TU-VAF) as a VIP aircraft.

The Egyptian government operates an Airbus A340-200 (Registered SU-GGG) as a VIP transport. The first presidential Airplane in Egypt was given as a gift from Saudi Arabia to Egyptian President Sadat. Before that, the President of Egypt, Gamal Abdel Nasser, traveled using a rented airplane from the National Egyptian Air company, Egypt Air. In 1955, and during his trip to attend the first Asian-African Conference in Bandung, Indonesia, president Nasser and his accompanying crew used a rental plane from the Indian National Air company.

Gambia uses an Il-62 for their VIP flights.

The Ghanaian government has ordered two (2) executive jets, for the exclusive use of the President. These two jets have special in-built massage parlours and would be delivered in 2010!

Kenya's president has a Fokker 70 for use as the presidential jet. The Fokker executive plane was purchased at a cost of $50 million. The 70-seater jet was reconfigured into a 28-seater, with three suites, bathroom and kitchen. It is equipped with the latest telecommunication facilities. Prior to the purchase of the Fokker, the Kenyan President primarily used Kenya Airways for his international travel.

In December 2008, the Malagasy Government acquired a Boeing 737-700 Business Jet for $60 million for the President of Madagascar, to the dismay of the country and IMF. The acquisition created inquiries by the IMF and World Bank as to origin of the financing and remains unanswered to date.

The Nigerian Air Force currently maintains a Boeing Business Jet (737) as a means of transport for the President of Nigeria. The plane is marked NAF-001. The national colors of the Nigerian Flag (Green, White, Green), are painted in long horizontal stripes along the base of the white fuselage, the words "NIGERIAN AIR FORCE" are tagged on the top, and the Seal of the President of Nigeria is embossed on the tail. In addition, there are a Gulfstream V, a Gulfstream IVSP, and two Falcon 900s. The former military government commandeered one of the Falcon 900s and a BAe 800 from the national oil company and the central bank respectively. However, the BAe 800 and a Cessna Citation Bravo were ordered to be returned to the Air Force for military use by President Yar'Adua in Jan 2009.

The President of South Africa travels in a Boeing 737-7ED (BBJ) operated by the South African Air Force's 21 Squadron, which is based at AFB Waterkloof near Pretoria, one of South Africa's capital cities.
The Tanzania Government Flight Agency operates a Gulfstream G550 for VIP transports.
Perhaps one of the most controversial air transports for a head of state was that of Zaire leader Mobuto Sese Seko, who leased a supersonic Concorde in the late 1980s and early 1990s. The jet, obtained from Air France, was based at Gbadolite and was not only used for diplomatic missions but also for European shopping trips for the ruler's wealthy family. There was also a Boeing 707 (registration number 9T-MSS) that was used for a while and has been stored in Lisbon since 1996, as well as a Boeing 727 (9Q-RDZ).

Mahama never paid compliments to Atta Mills like Bawumia do ...
14 minutes ago