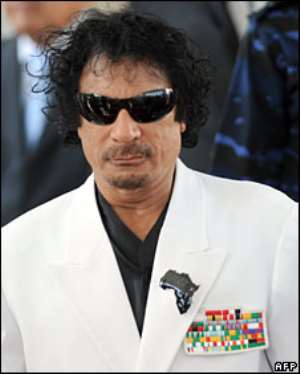 Over the past years, especially after the international community accepted him back into the diplomatic arena, Muammar al-Gaddafi has unflinchingly advocated for what could be described as a radical form of the African Union. Radical because his way, defies many if not all, proposals, arrangements, and efforts already underway, albeit on a much slower pace towards the creation of a unity government.

Though in principle ordinary Africans share the Libyan leader's passion for a political union for the continent, many are uncomfortable with his posturing. It must be emphasized that Gaddafi's call for the immediate creation of United States of Africa, is similar to Dr Kwame Nkrumah's Federal States of Africa .However, the cost benefit analysis for realising Nkrumah's dream goes beyond cash and influence that the continent needs to muster in order to earn global respect. I am referring to the credibility of the proponents and the methodology proffered.

The Libyan leader will be celebrating 40 years of uninterrupted power after his successful coup d'etat on September 1, 1969. For most part of his stay in power, Brother Gaddafi has been associated with sponsoring terrorist organizations and rebel movements particularly in West Africa. Mention is usually made of Sierra Leone and Liberia. He has therefore attracted wide condemnations of the international community for quite a long time, until recently in August 2003 when Libya wrote to the United Nations to formally accept responsibility for the Lockerbie bombing, and agreed to pay a compensation of about US$ 2.7 billion.

But Gaddafi's rule is not all blood stained. He has close to 40 years of experience in leadership. He has therefore dealt with dozens of global influential leaders who have come and gone. Mention can be made of former Presidents Ronald Reagan and George W. Bush (junior). Many Africans will also recall that Muammar al-Gaddafi has supported and continue to support a number of liberation movements on the continent and beyond whilst mediating disputes.

Brother Leader Gaddafi is one of the leading forces behind the creation of African Union in 2002. Prior to 2002, he has made various calls for a single currency, a single passport ease of travel and a continental military under a single high command, the latter he moved a motion for its creation at an African Union conference. The Union's Summit held in Accra in 2007 saw no less Gaddafi's efforts at pushing forward his agenda. Again, Brother Gaddafi means well but his methodology has a number of questions.

Latest on his grand Union agenda his decision to involve traditional leadership on the continent in his quest to move for the immediate establishment of a unity government in Africa.

In this regard, Brother Gaddafi initiated a forum of religious and traditional leaders across the continent during his 39th anniversary in 2008. Consequently, he was crowned 'king of kings' in August 2008 by over 200 kings, princes, sultans, sheikhs and traditional leaders who met in Benghazi, Libya. However, a move by Muammar al-Gaddafi to inaugurate and to elect a Secretary-General for his eminent traditional leaders in early January 2009 in Kampala, Uganda, for the eastern zone (eastern Africa) was frustrated by the Ugandan government, describing it as anathema to the constitutional sovereign role entrusted to elected leaders. Nonetheless, many national constitutions bar traditional leaders from engaging in active partisan politics, something Mr. Gaddafi knows.

As the African Union bestows on Brother Gaddafi the honour of leading the continent for a year, he should remember that the continent is confronted corruption, poverty and bad governance that need urgent attention than his lofty ideals about political unionisation of this complicated continent.

Alhassan Atta-Quayson is a graduate of the University of Ghana and a columnist of www.AfricanLiberty.org

Mahama Has No Blueprint To Fulfill His Promises – Sammi Awuk...
11 minutes ago