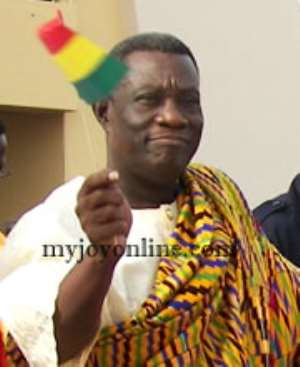 I wish to congratulate you most sincerely on your election as our President. As you embark on this most arduous task of leading us, I feel it my duty to you and country to call your attention to the following one issue before you settle in:

Unity
You were elected with a very thin mandate. Indeed you had to go through an unprecedented three rounds of voting to arrive at the mandate of 50.23%. Nana Akufo-Addo, who contested you with others, won the first round.

If our constitution was based on first to breast the tape in the first round, he would probably have been the president of Ghana now. In the third and final round of voting, he got 49.77% against your 50.23%. Corrected to the nearest round figure, both you and Mr. Akufo-Addo would have 50-50 apiece.

However, in electoral terms your 0.23% was enough to give you the mandate, which imposes on you the huge task of bringing the 50% that did not vote for you on board for national cohesion and nation building.

There is the temptation, I know, for you to prosecute your mandate as though it was an overwhelming and decisive one. Coming from opposition, there is an even bigger temptation to settle scores. Your manifest destiny clearly lies in your ability to unite us. Even if your mandate had been a landslide, the authority of state you would wield would not have permitted you to exercise it as a conqueror over the vanquished.

It may even be subliminal, but the figures of 49.77% and 50.23%, being so close, show a nation in some kind of political equilibrium, calling for unity; a nation that wants its politicians to consign to history the winner-take-all mindset of our past politics.

We need reconciliation. Pains and grievances stretching back to Independence 52 years ago are still with us. Some are so deep-seated that they may persist for several generations to come, but that's no excuse for us to also deliberately continue perpetuating them. We need a cutoff period and there is no better time than this time and as the leader, you must show the way.

The choice is yours, but the judge would be the people of Ghana and history. You can decide to move on with a clean slate or continue with the mistakes and angst of the PNDC/NDC (1981-2000) and NPP (2001-2008). The strident and nugatory NPP/NDC dichotomy must now make way for a broad nationalistic bi-partisan approach to national issues even as the two parties strive to give meaning to their liberal democratic and social democratic values respectively.

As a Ghanaian President made by Ghanaians, you are for Ghana. This is not gloating time, it is humility time. Almighty God certainly had a hand in our peaceful elections which as God-fearing compatriots we must all recognize.

The language of your presidency must be comported towards achieving the goal of united action: a language that would bring us all onboard to reach not only the UNMDGs at the appointed time of 2015 but also achieve our own projection of mid-income status around the same time.

A nation that prosecutes its business with half onboard and half adrift cannot also expect to make progress; the evidence is there for us to see: 52 years of under-development!

Thank you Mr. President. I wish you Godspeed.
Yours in the Service of Ghana