Nigerians Superior to Ghanaians? Let us Get to the Nitty-Gritty, Folks! 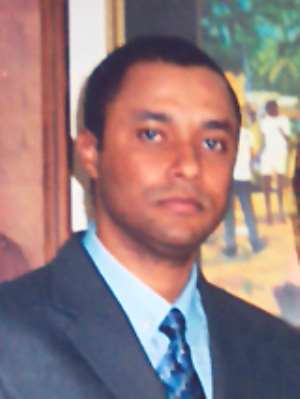 “Again, Ghana Shames Nigeria” is the caption of a fascinating article, written by one Sam Nda-isaiah ― the professional affiliations of this Nigerian writer/journalist were not identified in the aforesaid piece ― which appeared Monday, January 5, 2009, on Ghanaweb.com, the latter the leading pro-Ghanaian Internet news conduit.

In the said piece, Mr. Nda-isaiah highlighted the political successes garnered by Ghanaians since the inception of our Fourth-Republican multiparty democracy in 1992, the writer being remarkably accurate in his unadulterated and well-merited praise of the Ghanaian population, until he ensconced the verisimilitudinous and vituperative remark, “Aren't we supposed to be superior to Ghana[ians]?” People are apt to, naturally, exude a sense of patriotism (or even jingoism) without any reservations, whatsoever, but when the writer purports that Nigerians were superior to Ghanaians, without telling us exactly what he meant by his piquant assertion, then Ghanaians have no choice but to unequivocally reject such a derisory and downright disingenuous statement!

Comparing Ghana's highly praised and well-established electoral systems with Nigeria's haphazard and turmoil-ridden ones, Mr. Nda-isaiah would disparage his own country's electoral systems by reminding the reader that, in 2003, “Marshall Harry and Bola Ige, both critical opposition leaders, [who] had been deliberately murdered for the purpose of the election, [had miraculously cast their 'votes'] for President Olusegun Obasanjo on election day” (Ghanaweb.com, 2008). Mr. Nda-isaiah would also mock the ridiculously high voter turnouts, of up to 100% in some areas, arguing that such a scenario was impossible, under normal circumstances, for it would have meant that “no one travelled, no one fell ill and no one died between the voter registration period and voting day” (Ghanaweb.com, 2008).

In an unapologetic fashion, Mr. Nda-isaiah would question the neutrality of Nigeria's legal minds and the fundamentals of jurisprudence in his country, accusing justices of some of Nigeria's high courts of complicity in criminal behavior, instead of the impartial arbiters that they ought to have been under the nation's constitution. And then Mr. Nda-isaiah would deliver the coup de gräce!: that John Atta Mills, had he sought the presidency on the platform of the opposition in Nigeria, “would have had no chance in hell of winning” (Ghanaweb.com, 2008), since incumbency would have been exploited to maximum effect to perpetuate the rule of the party in power. Mr. Nda-isaiah then praised President John Kufuor for not contemplating a possible third term, unlike what former Nigerian president, Olusegun Obasanjo, had attempted to do!

Now that I have encapsulated the crux of Mr. Nda-isaiah's analyses of elections in our sister countries, let me tackle the writer's disrespectful statement, “Aren't we supposed to be superior to Ghana[ians]?” and also question why he thought Nigerians needed the equivalent of Ghana's Jerry Rawlings. And because Mr. Nda-isaiah's negative comment touched a raw nerve in me, I will not employ any euphemisms in my piece, as I intend to fully expound the social maladies conspicuous in the Nigerian society.


In parts of Nigeria where the title of “Chief” confers a form of regality that many ordinary Nigerians can only dream of, and although many people aspire to such a title, only a few get to enjoy the bestowal of such, provided these fortunate ones find ways to embark upon local economy-enhancing projects in their hometowns, irrespective of how the wealth was acquired. In fact, personal wealth in Nigeria is synonymous with respect, which is why Nigerians would kill and maim one another in an effort to acquire possessions! In a country where embezzlement of government funds is very rampant, billions of U.S. dollars are secretly stashed away in Swiss banks each year by corrupt officials, even while ordinary Nigerian citizens suffer from remediable problems. The troubles in Ogoniland in Nigeria's Delta region are a microcosm of the injustices that those in power continue to perpetrate against those citizens whose lands hold the nation's natural resources. If this is the “superiority” Mr. Nda-isaiah is alluding to, then he gets my unmistakable vote!

In a country where private residences are like walled fortresses because of the rapacious and sly tendencies of the wealthy and would-be wealthy and men of the underworld, such “fortresses” are necessitated by a lack of trust among Nigerians themselves. If the fear of armed assailants barging through one's front door has forced citizens to erect fortresses, which they incidentally call residences, and if these same are unable to get a good night's rest after their daily travails, then I fully concur that Nigerians are, indeed, “superior” to their Ghanaian counterparts!

A few years ago, I was leaning on my hotel room balcony railing in Lagos taking in the panorama of the shops across the street and the sun-drenched sky ― it was around 4:00 p.m.; the trip was a mélange of business and academic research ― when a group of thugs suddenly pulled up in front of one of the shops and, without any warning, attacked and shot the driver of a fairly new Peugeot 504 sedan, which had been parked along the street, although the gentleman did not appear to have resisted! Even while passers-by were screaming for help, these “animals” simply escaped with their “booty” with such rapidity, tire marks, stretching quite a distance, could be seen on the tarred road and the smell of scorched rubber permeated the air. It is this hedonistic and gangsterish lifestyle that Nigerians have now “exported” to Ghana, resulting in the catastrophic climb in armed robbery and hoodlumism in our beloved Ghana! Yes, Ghana, the once peaceful country, where, even in the big cities, people went to bed at night without locking their front doors, has now become the hub of cocaine trafficking and hooliganism, and Nigerians, by virtue of their insatiable thirst for money and riches, are clearly responsible for these societal anomalies in our great nation. If such propensities are what Mr. Nda-isaiah calls Nigerians' “superiority,” then the former has my unambiguous vote!

Former president Jerry John Rawlings' legacy is eclectic: he exploded from oblivion to national attention in 1979; continued with his “second coming” in 1981; and concluded with his “metamorphosis” from a military dictator to a democratically elected leader of Ghana in 1992, with his eventual re-election in 1996. In his eight years as president, Jerry Rawlings became a transformed man, jettisoning some of the fire-spitting rhetoric and scorching invectives that had characterized his personality prior to 1992, and, by an epiphany, embraced multiparty democracy, which is what Mr. Nda-isaiah may have found so spellbinding that he is calling for Nigeria's own Jerry Rawlings! What possibly could a Jerry Rawlings-type do to transform the Nigerian political scene? After all, Mr. Rawlings, after “cleaning house,” later handed over to himself (technically, Mr. Rawlings won two elections, but I hope I made my point!), so is that supposed to be a laudable experience?

While I will take nothing away from Jerry Rawlings ― he is, after all, the Father of Ghana's Fourth-Republican democratic dispensation ― I think John Kufuor deserves equal praise, if not more. During John Kufuor's presidency, he upheld the rule of law, encouraged freedom of expression, advanced freedom of association, and fomented an enabling environment for small businesses (these are the true engines of economic growth!) to thrive. And to top these achievements, John Kufuor, not unlike Jerry Rawlings, did not exploit the incumbency syndrome to perpetuate his party's rule, but rather agreed to hand over to John Atta Mills of the National Democratic Congress, the latter an opposition party, a move which showed not only Mr. Kufuor's faith in the rule of law, but his respect for the electorate. So, while Mr. Nda-isaiah is calling for a Jerry Rawlings-type for Nigeria, I think many of us would prefer a John Kufuor-type instead: no history of shedding others' blood, calm, longsuffering, refusing to persecute his political opponents, and willing to respect the verdict of an election his own party lost!

I hope that Mr. Nda-isaiah will take stock of the ills that have continually plagued his country ― these negative traits have, forlornly, been “exported” to Ghana as well ― before beating his chest and declaring that Nigerians were supposed to be superior to Ghanaians, whatever that meant! Honestly, I will prefer a quiet, peaceful life any day in a Ghanaian town or city to the Nigerian-on-Nigerian assault, fear, harassment and terror that continue to be unleashed unremittingly in Nigeria's towns and cities! Let Nigerians fix the perils in their own society first, and then, perhaps, they can come back and tell Ghanaians that they are “superior” to the latter!