Enough Of The Obasanjo Family, Please! - By Ugochukwu Ejinkeonye

By Ugochukwu Ejinkeonye
Listen to article

Recently, (Saturday Nov 22, 2008) I wanted to purchase a copy of Bitter-Sweet: My Life With Obasanjo, by Mrs. Oluremi Obasanjo, the woman who is sparing no effort just to underline her belief that no matter what anyone, including even Gen Olusegun Obasanjo himself, thinks is the case, the truth she would want everyone to see and swallow is that among the countless women swarming the Obasanjo harem, she is the only one qualified to be called his wife. Others, she insists, are mere concubines. To buttress this point, she reminds us on page 91 of Bitter-Sweet, that while broadcasting the profiles of leading members of the Obasanjo junta just before he handed over power to Alhaji Shehu Shagari in 1979, 'the Nigerian Television Authority (NTA) showed me, and my husband, and our five children then, as the officially recognized and properly married wife, the wife of his youth he swore to keep forever.'

When I called the number on the invitation card for the public presentation of the book (which I didn't attend), an elderly female voice told me to go to James Robertson Street in Surulere, Lagos, that I would get the book there. In Surulere that Saturday, especially, on Adeniran Ogunsanya Street, and virtually all the other streets in the area, including Ogunlana Drive, Masha Road, and James Robertson, I encountered one of the worst traffic situations Lagos may have experienced since it began to exist, which served as painful reminder of the abysmal failure of character and leadership that had distinguished the eight-year reign of the subject of the book I was taking all the trouble to purchase. As the traffic situation worsened, I abandoned the car in one of the streets, jumped onto an okada (commercial motorcycle), and in no time, was in James Robertson Street . Since I needed to get an additional copy for someone, I bought two copies - one hard cover (N3, 000) and soft cover (N2, 000), and there went N5, 000 which I now sincerely believe, after reading the book, could have been invested in a more rewarding and edifying venture!

Now, forget the sensational reviews of the book you may have encountered so far since it was presented to the public at a very poorly attended ceremony in Lagos a recently. The book contains only very insignificant, highly biased items that could be considered new to what the public already knew about Obasanjo; there is hardly any information therein with the capacity to shock or awe; nothing really exciting, enlightening or edifying about the subjects treated in the entire book. The public appears to have more than it offers.

The book is all about a woman's attempt to rewrite herself into prominence and reckoning in one man's life, to demonstrate, albeit incoherently, that no matter who the public saw starring with Obasanjo in all those days he hugged the limelight as Nigeria's ruler, it was she, Oluremi, that the man regarded as the central figure in his life, despite the countless battering she got from him; that it was she who turned down the offer to live with him in Ota; that her decision to stay apart left a huge void in his life; that he was always pleading with her not to leave him alone; and that despite his brutal actions towards her, he loved and respected her and only kept the other women as 'ponies.' Although, it is known that the author and her husband were separated at some point in time (and she keeps talking, about 'when I was kicked out') the strength of the book lies in her ability to leave the reader in total confusion about when exactly this happened, how long it has lasted, or whether it has been intermittent. Instead, greater energy was devoted to show the prominent role she continued to play in Obasanjo's life, playing down the separation and reducing all the other women to mere fringe elements in Obasanjo's life. Dripping from the pages of the book is the undying love she retained for her man, and her willingness to receive him back any time he returned from his boundless wandering through countless skirts. The author's bitterness towards late Stella was so palpable; it could not be assuaged even by her death. And the way she always gleefully announced the misfortune that met the several people that did her hurt speaks volumes about the nature of her heart. And despite all she suffered from Obasanjo (including being detained on Obasanjo's instructions at the Lafenwa Police Station, 'stripped to my underwear'), she, like Carol McCain, still loved him. But she makes a touching confession on page 64: 'He is the only man I have known all my life So when I found out his philandering exploits, I regarded it as the unkindest cut for his breaking the sacred vow we took at the London Registry.'

Now, I sincerely think that time has come for Obasanjo and his dysfunctional family to excuse Nigerians from their endless problems and the incredibly suffocating stench that always oozes from that obviously desecrated homestead, and school themselves to realize that we are all sick and tired of it all. I can't remember the last time I heard anything wholesome and edifying from that family. Not too long ago, Gbenga, Obasanjo's son shocked the nation when he stated in an affidavit that himself, his father and father-in-law, were sharing his wife, and that his father was rewarding his wife with juicy government contracts after sleeping with her. He went further to say that due to this multiple sleeping partners his wife was generously hosting with immense relish, he required a DNA test to establish the paternity of the children born to him by his wife, since he was not sure any more who among the three had fathered them. What a family! My heart surely goes out to those hapless tender children, who never asked to be born into the badly mismanaged Obasanjo family, and who would grow up tomorrow to grapple with the serious debilitating doubt over their paternity, raised by no other person than the man they call their father. Senator Iyabo, on her part, is always in the news for the most horrible reasons. When she is not transacting very controversial and ugly deals with a name other than her own, she is being accused of mismanaging committee funds in the Senate. In fact, a newsmagazine once called her on its cover, 'The Queen of Scandals,' a tag her mother on page 123 of the book thinks does not befit her daughter. Rather, Oluremi thinks her children are all unfairly having image problems because of 'the name, Obasanjo.' And so, the attempt by the EFCC to get Iyabo to explain her role in the scandal involving the Senate Health Committee fund was all done 'in a bid to humiliate her because she is Obasanjo's daughter.' Iyabo, she maintains, was not appointed Ogun State Health Commissioner because she was Obasanjo's daughter, but rather she had worked hard to earn it. I suppose she expects anyone to believe that?

My problem with this book is that it is a needless effort to advertise raw bitterness. And it would end up dishonouring the same children she loves and defends. But what sickens me most is her attempt to exonerate her children from matters in which the public is even in possession of superior facts. What it tells me is that if Obasanjo had not kicked her out of his life, she would also have been out there today defending him against Nigerians who dared express disgust at the unmitigated disaster and organized banditry he effectively supervised for a whole eight years in Nigeria, during which corruption was effectively institutionalized and celebrated, and the country ruined.

For her, so long as a person is in her good books, the person can do no wrong. So, why should I bother myself about such a person and her book? 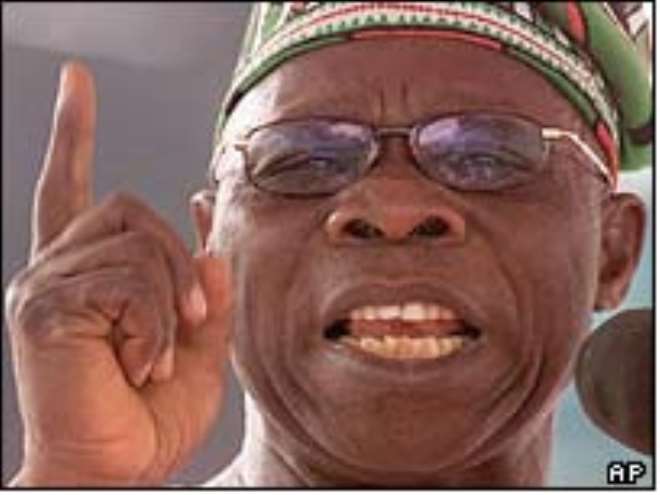 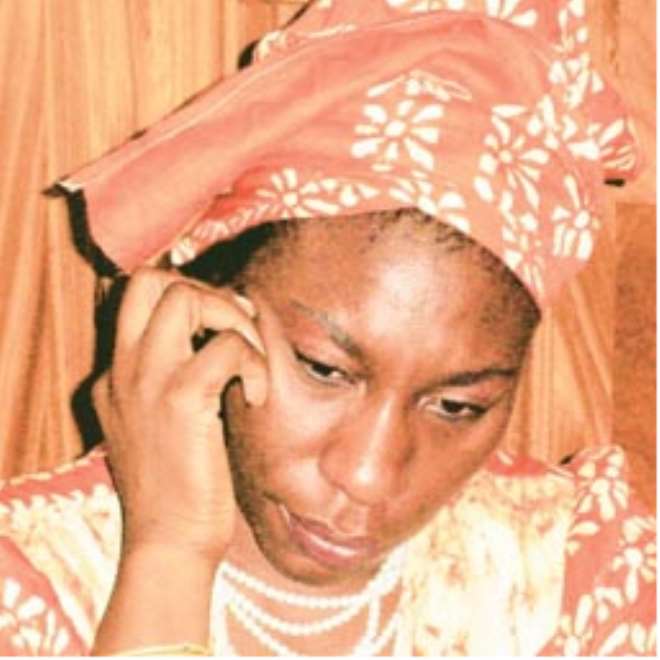 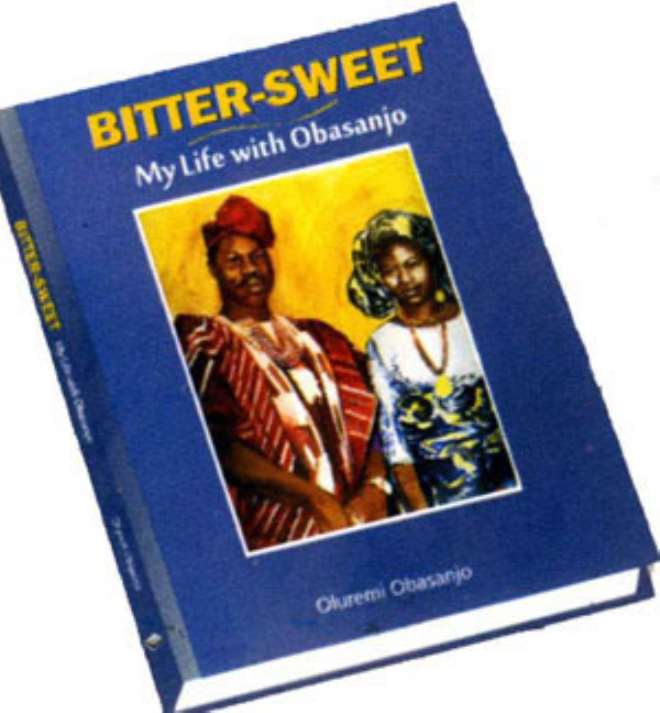