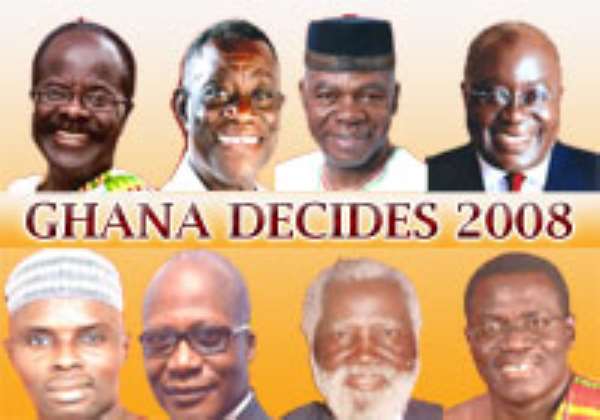 The people of Ghana will have the opportunity to exercise their constitutional rights to vote for the president and parliamentary candidates on Sunday, December 7, 2008. The political campaign for these political offices has been very tense but devoid of any crisis. The major political parties and their candidates have been very careful not to provoke the other to avoid unwarranted disburtsnances.

However, their supporters have not behaved the same manner and many agitated for trouble. Many unkind words were said and some even have stated that there will be trouble in the country should their party loose. Many of the people have calculated their winning based on the crowd that attends to their rallies. Many have also depended on election polls carried out by organizations with vested interest in the outcome of the election that will benefit their political alliances.

The fact of the matter is that the election results will be the only poll that matters. It is therefore not correct that if their choice of candate should loose even though the poll has declared them winners, the election is not fair and they will recourse to unnecessary disturbances to pring about national confusion and political unrest. Some have already indicated that there will be another Kenya or Zimbabwe which may result in the so-called power sharing. This writer wrote in this website on “Ghana Will Not Be Another Kenya or Zibabwe“(www.Modernghana.com August 29, 2008) stating that Ghana is not be Zimbabwe.

The call for a peaceful election before and after is the wish of the international community. A lot of goodwill has been extended to Ghana and all peace loving people wish Ghana well. The onus of either peace or disturbance rests with the leadership if the major political parties.

The best way to demonstrate political maturity is for the loosing candidate to openingly congratulate the winning candidate and offer his cooperation in the management of the affairs of the country. He should be the best example to be followed by this supporters. Likewise supporters should also demonstrate their goodwill and call their friends, neighbors and these who support the other party and offer their congratulations and offer to work in peace to provide the needed change in Ghana. Congratulations should go all round and this should be done in the best of spirits. Supporters of each party will follow the lead of their party leaders. Those who have been writing against their opposing candidates should get on the internet and immediately write congratulatory messages and offer their services to assist in the good governance of the country.

They should not start the war of words to instigate the people who voted their hearts. Many tof the writers in the Ghanaian websites have used the recent American elections as examples of who will win and who will loose. In as much as most of their augments for and against their candidate winning has lots of room for argument, it is important to note that the US demonstrates restraint and majurerity in the exercise of their political power. The best example of US action in an election was in 2001. If that was to the in Africa or any third world country, there would have been a major political upheaval.

This exercise of statesmanship as demonstrated by Al Gore is what is expected of the presidential candidates in Ghana. It was not the situation in Kenya and Zimbabwe. Power sharing has no place in Africa and we are all witnesses to what is taking place in Zimbabwe. It is still unfolding without an end. In the interim the people of Zimbabwe are paying the price for the power struggle of only two men. We don't want to see this in Ghana. Ghanaian should accept the result of the election which has been duely organized.This writer wishes all presidential candidates good luck and all parliamentary candidates good luck. It is up to them to demonstrate that they can loose with dignity.