Fire in Zimbabwe: The Underlings Of A Political Crisis 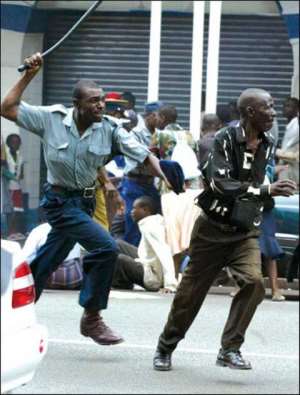 Family, this article was prompted and encouraged as a response to an article written by Konongo Fordjour, titled: "Congo crisis, Zimbabwe crisis - Ghana Again?" (Ghanaweb June 28, 2008).

In a brief summary, Mr Fordjour extolled the virtues of Mr Robert Mugabe, as a national liberation hero, whose main raison d'etre is to rescue Zimbabwe from the clutches of wicked western colonialists, neo-colonialists and interests, and portrayed Mr. Morgan Tzvangarai as a pretentious xenophobic drop-out lap-dog of western interests, who does not remember nor appreciates the sacrifices of other African countries to help liberate Zimbabwe only to turn around, as a leader of Zimbabwe Trades Union Congress (ZTUC), to unleash torrents of attacks against migrant Africans, especially Ghanaians; made even more painful, when a Ghanaian, Sally Mugabe, was the very first lady of independent Zimbabwe, and Mugabe himself was inspired and groomed in Ghana, by Kwame Nkrumah. Fordjour also said that the crisis in Zimbabwe falls along ethnic and tribal fault lines, and that there is no way the majority Shona, 82% of the population, are going to allow themselves to be ruled by a member of the minority Ndebele, 14%. Mugabe is a Shona and Tzvangarai, an Ndebele. That, people, is the background.

As much as I enjoyed reading Fordjour's article, getting a different input and insights about Zimbabwe, Robert Mugabe and Morgan Tzvangarai, I was still hungry for more. The article certainly went deeper to expose the undercurrent tribalistic politics in Zimbabwe. It certainly affirmed for me that in Africa, there are no true political parties. What we have are political factions, anchored on tribal groupings, under the tutelage of figures that draw their strength mainly from their tribal leanings and not any strongly held ideologies. The only ideology is self-preservation.

The African wears many hats. Just like we sport in western circles, we have home names, and made-for-western consumption names. You would be surprised to know somebody called Patricia Beatrice Boakye in say, Toronto, and that is not how her parents know her. Back home she is called Abena Bruwaa. Her grandmother even doesn't know she is called Patricia, never heard of it, and doesn't know anybody called Patricia Beatrice Boakye, if you should go and ask of her. That is the case in Africa. We pay only lip service to western themes like democracy, freedom of the press, rule of law, political parties, etc, but then that is just for the consumption of the western press, that is not what we practice in reality. What we have is sham democracy and factional politics. What Fordjour exposed is not unique to Zimbabwe; tribe-inspired politics cast a wide net over the African political landscape. But then I fault Mugabe for not using his 28years at the helm to build a truly national political master plan that would poll people around universally accepted truths and ideologies, the way Nkrumah did to rally us, Ghanaians, around as one people, one nation, united with one common destiny. He has used the hammer of the state, yet whilst remaining tribalistic underneath, to quench all challenges to his position. The man is 84years old, and it is amazing he is not grooming anybody to take over from him, should he drop dead tomorrow. Death is fast on his heels, but he is pretending he has another 84years to go.

Yes of course we understand his profound angst towards the land issue, nowhere in the world would anybody accept that a 1% settler population, and as stark and contrasting as black and white is, allow that 1% former slave masters to control 50% of the best fertile lands, whilst the indigenous aboriginal people, 99% strong are consigned to the remaining limestone, impoverished badlands. And to add insult to injury, you were double crossed to buy back the land that was stolen from your ancestors at an exorbitant price. At the 1979 Lancaster House talks in London, leading up to the independence of Zimbabwe, the United Kingdom, had agreed to provide the money to buy back any land from a white settler who wanted to sell his lands. Regrettably, during Prime Minister Tony Blair's regime, the United Kingdom walked away and renegade on that promise. That, people, set the stage for the violent expropriation of white farms by Mugabe, beginning in 2000, against the backdrop of worsening economic crisis. But should Mugabe have gone about the redistribution of the lands the way he did, handing land over to war veterans, most of whom really did not have any know-how and interest to maintain and grow the farms and the attendant agribusiness and industries that went with it? All he did was confiscate, hand over to cronies and forget it. He did not have a plan beyond confiscation and redistribution of white settler farms to mostly war veterans. That is the beginning of the slide of Zimbabwe into this incalculable economic meltdown, with inflation over 1,000,000% (1 million percent) today.

Economics affect politics and vice-versa. Now Mugabe is caught in a sand dial, with the clock running out fast on him to do anything. The most prudent thing to have done was not to contest the last election at all and let an heir apparent to step in his shoes whilst he advises from behind the scenes with the experiences gained, but nay, he forgot to tell the people that he was a president for life, as he recently told a group of businessmen in Bulawayo: "Only God, who appointed me, will remove me. ….I will never handover to Morgan Tsvangarai". Too late, too little. He is going down with the country, and this time his imminent death would, regrettably, be a hilarious and liberating welcome for the Zimbabweans. Forget about Konongo Fordjour's apparent disdain for Morgan Tzvangarai. He has an axe to grind with him, starting in the 1980s; that somebody stood up against the prospect of non-citizens overflowing a country that had just weaned itself from the most absurd form of colonialism, being enslaved in your own land by a settler white community, only to see it overtaken by others. Independence meant for them getting jobs, decent jobs for themselves, not to be over run by another settler community, no matter the colour of their skin. They did not liberate themselves from white settler community, only to standby to see their gains go to a black settler or migrant community, coming as far away as Ghana and Nigeria. We wouldn't have accepted it in Ghana, reason why Prime Minister Dr. Kofi Abrefa Busia pushed out the mostly Nigerian and Lebanese business class, why should Zimbabwe be different? Until Busia's Aliens Compliance Order, Makola and Kumasi Central Markets were, for example, overwhelmingly the sole domain of Nigerians and Lebanese businessmen, Ghanaians having been reduced to mere spectators and consumers. If only they had invested their bonanza in the Ghanaian economy that wouldn't have been annoying, all the gains were spirited away to Nigeria and Lebanon, whilst we languished behind as happy-go-lucky nkurasefuo (unsophisticated villagers). The rise of Kwahu and Ga commercial business class flew directly from the expulsion of the aliens. That is what Tzvangarai was about, and on that score wasn't different from Mugabe, who took farms and lands from the whites. See, it made sense. The execution of the plan is where the problem lay. Mugabe, unlike Nelson Mandela, didn't know, or was unwilling to integrate white Zimbabweans into black ruled Zimbabwe, and unlike Rawlings didn't know when to call it quits, when the clock ran out on him. They both came on strongly in 1982, but faced with changing tide, Rawlings, despite all the insults we heap on him, had an acute sense of time, knew when to leave before the people came for his head, in spite of the fact that he had wondered aloud, "hand over to whom?". That we can say was a commendable feat, for a dye-in-the wool boneheaded dictator to go peacefully, without involving his country in turmoil. Not Mugabe. He is dangerously courting a violent coup d'etat, which would see more people die. All for what? The ass of an 84year old charlatan?

There are lot of lessons to be learned from the debacle in Zimbabwe. A case study of how not to ruin a country. This is what Nobel Peace Prize winner, Archbishop Desmond Tutu said of Mugabe the other day: "Mugabe seems to have gone bonkers in a big way. It is very dangerous when you subvert the rule of law in your country, when you don't even respect the judgments of your judges… then you are on the slippery slope of perdition… He's almost a caricature of all the things that people think black African leaders do. He seems to be wanting to make a cartoon of himself." As we rushed to press with this article, Sunday, June 29, 2008, Mugabe is said to have won a landslide victory in a one-man election and due to be sworn in as president for another 5years term, before he even flies to Egypt to attend an African Union summit which opens on Monday, June 30, 2008. With a host such as Hosni Mubarak, in power since 1981, and in the company of Colonel Gaddafi of Libya (since 1969), Paul Biya of Cameroon (since 1982), Obiang Nguema Mbasongo of Equatorial Guinea (since 1979) and Omar Bongo of Gabon (since 1967) etc. the joke is on us, Robert Mugabe is among brothers, the African dictators club, where he would receive high-fives and a toast to self-preservation. Will Kufour and others, the so-called new breed of African leaders, bite the bullet and tell Mugabe in the face; he is not worthy to sit at the high table? Ha, that would be the day, but I doubt it. They lack the spine bone. Meanwhile Zimbabwe is burning, who would speak for the voiceless and powerless? You go figure.