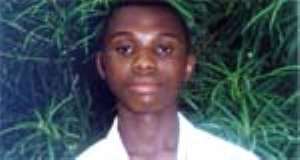 It has emerged that 18-year-old Adisadel College student, Gafaru Mustapha was preparing for a pending Chemistry examination when he met his tragic death.

Mr. Abdul Rahman Mustapha, the deceased's father who spoke exclusively to DAILY GUIDE from his Architectural and Engineering Services Limited (AESL) office in Accra yesterday, said he heard about his son's death on Sunday after he had gone to the State Transport Company terminus to pick his wife, Salima, who had just returned from a trip up North.

“I had a call from Cape Coast and gathered that there was a problem about my son. I wondered what the matter could be.

“That was the second call to come,” he said, adding that he did not pick the first because he did not recognize the number.

The second caller was however his brother-in-law who lives in Cape Coast and to whom the deceased turned to when he had any problems, he indicated.

Mr Mustapha said his in-law told him that there was a problem with Gafaru that required his presence at the school.

“When I asked my brother-in-law where Gafaru was, he said he was at the mortuary. I asked him whether he meant hospital or mortuary and he emphasized the latter,” he narrated.

Since he did not want his wife, Salima to hear the discourse, he asked her to leave the room, which she did.

“I drove to the school and came face-to-face with the reality. At the mortuary I saw the remains of Gafaru. Since we are Moslems and because of the state of the body, I asked that the burial take place in Cape Coast.”

He expressed gratitude to the Moslems of Cape Coast for performing all the necessary Islamic rites for the dead, including the internment.

Narrating what he heard about the son, he said Gafaru was hiding on the fourth floor of the block alongside other students so they could prepare for a pending Chemistry examination.

“Gafaru's friend, who was in a nearby washroom, on discovering the approach of the Senior Housemaster, raised an alarm. The deceased then jumped from the fourth floor. What baffles me though is that he jumped headlong. Only the deceased knows what happened. I do not want to go further.”

A week before the tragedy, he explained, the deceased was very ill and his mother even told him when he called, that she would make time to visit him later. Gafaru, he said, was studying to catch up with the lost days when he took ill, hence his taking cover in the new classroom block.

“For the three years that he has been at the school, I have never heard about Gafaru avoiding morning devotion,” he said.

On how he told his wife about the death, he said, “I told her when he died that he had fallen ill again since, after all, he was indisposed earlier,” he said.

Father of the deceased intimated that Gafaru was a regular at a particular mosque in Cape Coast.

“He had learnt to read the Holy Quran from his infancy and was very regular with his prayers,” he said.

The deceased was buried in Cape Coast on Monday- a day after his tragic death- an internment which saw many Moslems from the ancient city attending.

In a reaction to the incident, headmaster of the school, Mr. Herbert Graham is reported to have stated that the Senior Housemaster, Mr. Joseph Birikorang Opare did not go to the block to punish anybody.

The housemaster, he went on, did not even see the deceased “so it wasn't a question of punishment because the teacher never saw the boy and the boy never saw the teacher and they were even far apart in the building”.

Adisadel College, one of the leading second cycle institutions in the country, remains closed since the authorities ordered students to go home following violent reaction over the death of Gafaru.

He said he found the behaviour of the students strange because as he put it, 'this is the first time that such an unfortunate incident is taking place in the school'.

The headmaster said though that final year students would be asked to return next week.