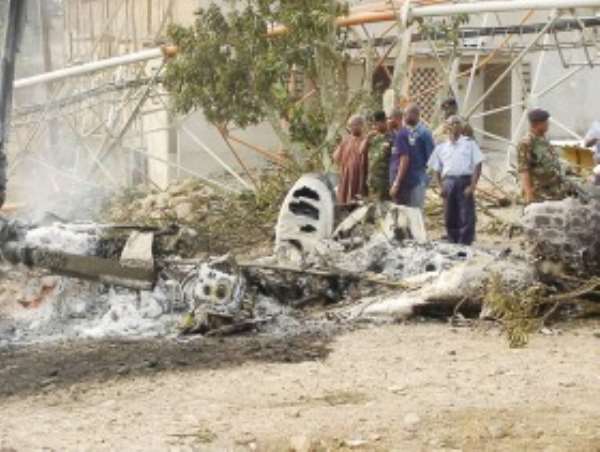 THE grief of the people of Adukrom, a town on the Akuapem Ridge in the Eastern Region was worsened when a military helicopter carrying the casket of Air Marshall Michael Akuoku Otu, a former Chief of Defence Staff, for burial in the town crashed yesterday afternoon while landing.

The accident threw the family and the entire township who were awaiting the arrival of the casket into a state of shock.

The helicopter burst into flames moments after hitting a telephone mast belonging to Millicom Ghana Limited, operators of Tigo mobile phone as it attempted to land.

All the 13 passengers and the five crew members on board escaped unhurt before the aircraft burst into flames on impact but the body was not recovered, a release signed by Colonel E.W. Nibo, Director of the Public Relations Directorate of the Ghana Armed Forces, said.

The incident happened before the full view of a large number of Air Marshall Otu's family members, mourners and dignitaries, who had gathered at the Adukrom Methodist Park to receive the body. The GAF said it had dispatched a preliminary investigation team to Adukrom to determine the probable cause of the accident.

According to eye witness account the aircraft almost landed on a park in front of the Adukrom Police Station but the rotors generated so much dust that the Pilot was forced to go up again.

It grazed the church building of the Adukrom Apostolic Church of Ghana; hit a communication mast belonging to TIGO and a nearby tree before coming down and moments later burst into flames.

On Friday morning, the body of the Former Air Force Commander was laid in state at Burma Camp where pre-burial service was held for him. A family spokesperson for the Otu Family of Adukrom, Major Kwabena Adu Otu (rtd) said the arrangements made for the burial of the Air Marshall Otu would proceed as planned.

He said the Military pathologist on the scene would retrieve the ashes of Air Marshall Otu, prepare it and put it in a casket for the funeral on Saturday.

Major Otu said, although the incident was unfortunate, the family and the Military High Command had agreed that the funeral should proceed as scheduled.

Wake would be kept to be followed with burial service at the Adukrom Bethel Presbyterian Church on Saturday before internment at a family vault at Adukrom on the same day. control and there was no need to panic.

The large crowd that gathered at the scene earlier had begun dispersing whiles the Military was also seen picking the debris.

Fire tenders from Mampong and Koforidua reached the scene too late as the helicopter, one of the four new MI-17Vs recently acquired by the military from Russia, burnt to ashes.

When the Times reached the scene at about 2:30pm, the helicopter was still burning. A vehicle parked near the landing site to convey the casket to the funeral grounds also got burnt.

According to an eyewitness account, the aircraft failed to land on first attempt and as it took off again, it grazed the church building of the local Apostolic Church, hit a communication mast and a royal palm tree before crashing to the ground and burst into flames.

One family member said that as the aircraft was preparing to land at the Methodist School Park, its fan blew a lot of dust from the ground into the atmosphere which covered it.

"I did not see the helicopter again when the thick dust rose in the atmosphere. But it suddenly dropped to the ground as the mast also fell," he said, adding the military crew tried to pull out the casket after escaping through the back door of the plane but abandoned the effort as it caught fire.

Although the survivors were unhurt, they were taken to the Tetteh Quarshie Memorial Hospital at Mampong for medical check-up.

Major Kwabena Adu Otu (rtd), a family member who was on the plane, told the Times that the funeral would go on as planned.

He said a pathologist of the Ghana Armed Forces has been invited in to gather the charred remains into a new casket.

Military officials at the scene refused to comment on the accident and asked newsmen to wait for the military high command who would respond to their enquiries.

A statement signed by Col. E.W. Nibo, Director of Public Relations of Ghana Armed Forces said a preliminary investigation team had been dispatched to the crash scene "to determine the probable cause of the accident."

At the onset of the harmattan this year, the Meteorological Services Agency warned that the intensity of the haze could affect flight operations in the West Africa sub-region.

Yesterday morning, the body of the former CDS was laid in state at Burma Camp where pre-burial service was held for him. Wake was to be kept at Adukrom preceding burial today.

Air Marshall Otu, a recipient of the highest state award, The Order of the Star of Ghana, died on October 8, 2006 at the age of 81.

Described as a brave and disciplined soldier who served his nation in numerous ways, Air Marshal Otu rose to prominence in the military and served in all three arms of the Ghana Armed Forces, starting off as an infantryman and retiring as Air Marshall and Chief of Defence Staff

On March 15, 2002, a Ghana Air Force helicopter which was on a medical evacuation mission, crashed near Nkawkaw in the Eastern region, killing all seven people on board.

The Agusta Bell helicopter was dispatched to the Nkawkaw Holy Family Hospital to convey a soldier and a civilian employee who were in critical condition following a road accident, to the 37 Military Hospital, but went down on its return killing four crew members, the two patients and a nurse.

The pilot is said to have lost contact with the Accra control tower and was subsequently declared missing by the military, but found in a forest after three days.

.Following that crash, the Defence Minister, Dr. Kwame Addo-Kufuor, on March 20, 2002 instructed that all helicopters of the GAF be grounded and thoroughly checked to prevent further accidents.

He also requested the manufacturers of the Agusta Bell 412 helicopters and their local agents to assist the Ghana Armed Forces to review the current state of the helicopters and ensure their worthiness.

But the ban was lifted about a month later when Agusta Bell Company manufacturers of helicopters declared that GAF's aircraft were air- worthy after undertaken inspections on the planes.