We have to significantly change our consumption patterns, support investments for production and export – Finance Minister 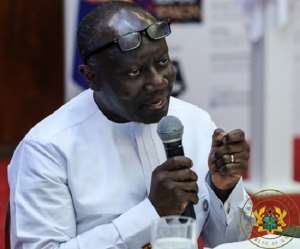 The Minister in charge of Finance, Ken Ofori-Atta is advocating for a change in taste for imported goods.

Appearing before the ad-hoc committee set up by Parliament to probe allegations levelled against him by the Minority in their Censure Motion on Friday, the Minister stressed that it is important that the country changes its consumption patterns.

He proposed that the country must prioritise and support investments in local capacity for production and export instead of constantly relying on imported goods.

“Hon. Co-Chairs, it is time to have an honest national conversation on the patterns of expenditure as a people. Our preference for imported goods, which requires foreign exchange that we do not earn enough of, implies that our cedi will continue to be under pressure.

“It has become clear that we cannot continue in a business-as-usual mode. We have to significantly change our consumption patterns and support investments in local capacity for production and export,” Finance Minister Ken Ofori-Atta said.

This is an idea that was echoed by President Nana Addo Dankwa Akufo-Addo in his address to the nation on the state of the Ghanaian economy in October.

Meanwhile, the Bank of Ghana has already put in place an important measure to demotivate the importation of food.

The Central Bank has with immediate effect put a stop to the supply of foreign exchange for the imports of rice, poultry, vegetable oil, toothpicks, pasta, fruit juice, bottled water, ceramic tiles, and other non-critical goods.

Government believes with intensified support from the banking sector, these items can be manufactured and produced in sufficient quantities in Ghana.