Giving Praise Where Praise Is Due – The Judges’ Villa 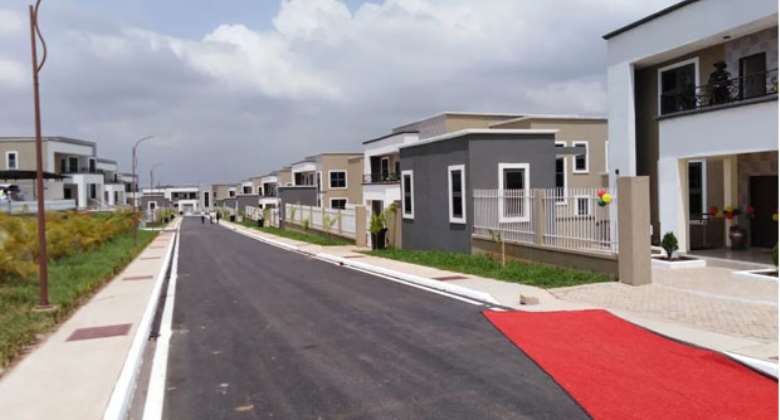 “I bid congratulation for all your work. I give you props for all you do I'm so very proud of you I'm only giving credit where credit is due” - Belinda Richmond

MAGNIFICENT! HISTORIC! And if citizen-vigilante ABK Amidu were around, he would have added 'gargantuan'. Of course, Honorable Osei Bonsu Amoah, MP for Akwapim South and Deputy Minister of Local Government would say: “This is the first of its kind” (in Ghana, in Africa… a good example for others to copy). Nii Lante Vanderpuiye, MP for Odododiodio, admitted: “… very impressive”. Satisfied lawyer Irene Naa Torshie Addo (now Lartey), the Administrator of the District Assemblies Common Fund (DACF), would hardly regret losing her Tema West seat to Carlos Kingsley Ahenkora, and say: “This is what an effective application of our 5% Common Fund can give us …” Her wedded husband, bespectacled businessman, Frank Lartey, was around to “see things for himself”.

It was a sultry Monday (17th October,2022) morning with no sign of rain that the ceremony (to inaugurate the very beautiful “villa” for Appeals Court Judges) took place. It was a colourful occasion when the President Nana Addo, the Asantehene, the M.P. and ministers “landed”. They were duly recognised by the MC, Kwame Adinkra. Cletus Avoka (I shall return) MP for Zebilla, Hon. Chereme, MP for Berekum East, Andrew Amoako Asiamah, MP for Fomena, Hon. Osei Kyei Mensah Bonsu, Majority Leader, Hon Joseph. Osei Owusu, MP for Bekwai, First Deputy Speaker and MP for Bekwai, Hon. Matthew Opoku Prempeh (Napo) Minister of Energy, handsome looking Alan Kyerematen, Minister of Trade, were all there.

The Nyame-Akwan Nwonkoro Group, led by our sister Akua Badu, gave the traditional touch, and pockets of cheer-leaders displayed their party affiliation.

The Asantehene, Otumfuo Osei Tutu II, graced the occasion. He must have felt satisfied that his donation of a seven-acre land at Danyame at “zero-cost” had been put to good use. Other chiefs who were there included Daasebre Nana Osei Bonsu (Saint) of Asante Mampong and his queen, Nana Agyaako Dufie, Nana Agyi Kesse the Adumhene, Anantahene Baffour Agyei Twitwikwasewa, Dominiasehene Baffour Yaw Boateng. The Catholic Archbishop, Gabriel Anokye, gave the opening prayer. The Ashanti Regional Minister, Simon Osei Mensah, in his welcome address, appeared elated that the ceremony marked the turning point of the fastest executed project in Ghana.

The contractor had done very well, and the Chief Justice, Kwasi Anin Yeboah, and the Judiciary, had also closely monitored the project from the breaking of the ground to the completion.

There were 20 houses in all-all fully furnished-four bedrooms and a two-bedroom outhouse, Wao! A complete gated community with a seven-bedroom guest house, a club house, a tennis court and a gymnasium, security was perfect, stand by generator, water containers, well laid streets, offices for maintenance workers.

As narrated by Godfred Dame, the past Chief Justices Georgina Wood and Sophia Akuffo, had played their part in getting the Court of Appeal building constructed, the problem was accommodating the judges. For this gap, judges who came from Accra had to be accommodated in hotels, together with their drivers, batmen and all. Not only was this expensive, it was also inconvenient. With these structures, all that a judge of the Court of Appeal needed to do was to “pick his portmanteau with few items of clothing and toiletry – and he is okay,” Lawyer Adu Gyamfo chipped in, Lawyer Kwame Awuah, could hardly believe his eyes: “such a structure in Kumasi! Otumfuo has done well; the Judiciary and typically the Chief Justice, Kwasi Anin Yeboah.”

The President, Nana Addo, was all praise for the Chief Justice for his close monitoring of the project (shuttling between Accra and Kumasi every week to keep a close watch for the project).

The President noted: “I am hopeful that this massive infrastructure development will motivate the Judiciary to work harder and promote the rule of law in the country.”

The President, who valued the contribution of judges in the justice delivery system, noted that the government was currently constructing 120 courts and 150 bungalows for judges and judicial staff throughout the country. This, hopefully would reduce the infrastructural challenges that the Judiciary come face-to-face with.

The Chief Justice, Kwasi Anin Yeboah, reiterated the hard work done by the Judiciary to improve the legal framework to uphold the highest standards in justice delivery; this is done, unfortunately, amidst the deplorable nature of some court premises and lack of judges' residence. It was his hope that many of such courts and residence will be built to bring justice “close to the people”.

The Supervising High Court Judge of Ashanti, Justice Kofi Akrowiah, who gave the vote of thanks while praising the Otumfuo for his generosity for the land, and the President for providing funds, could not help but congratulate the Chief Justice, Kwasi Anin Yeboah for his routine weekly supervision of the work… and for Naa Torshie, it was marvelous work; the contractor, Construction Ambassadors Limited, had worked conscientiously to get to the completion of the project within time

The Muslim clerk who gave the Muslim closing prayer could not fail to advice the organisers of the programme to give him due recognition as “Otumfuo Kramo (the Muslim cleric of Asantehene and not Regional Chief Imam)”.

After the tape-cutting and the inspection tour by the President, Otumfuo and other dignitaries, the entourage departed… around 1:30 pm; then there was “everything” to drink and “everything” to eat-provided by Jofel Catering Services, “Madam” Felicia being handy to ensure that everything worked to perfection.

So satisfied was everybody that nobody asked about the last-minute inspection of the site (Sunday) by the Chief Justice and some selected members of the Judiciary – to ensure that everything was in place for the ceremony. Nobody bothered about the cost; nobody ever thought about the absence of a clinic and nobody was worried about the slippery nature of the tiles.

It was left with the question of christening the residential complex or villa: “Naa Torshie Villa” or “Kwasi Annin Yeboah Villa”. Either way, one may not be wrong in heaping praise where praise is due; or rather, giving credit where credit is due.