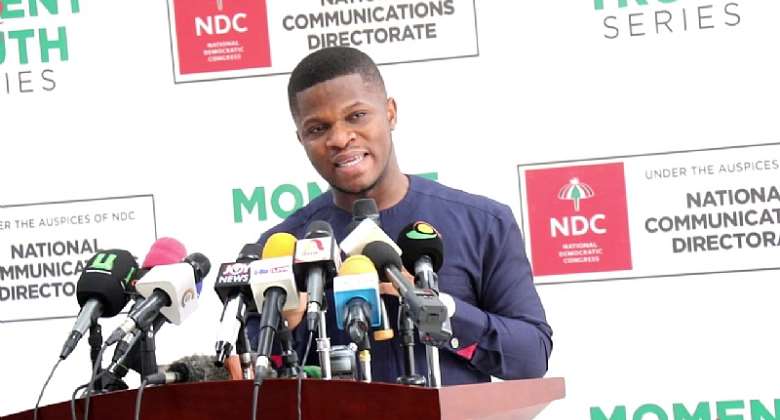 The opposition National Democratic Congress (NDC) has expressed worry over the menace illegal mining, otherwise known as galamsey is causing to the country’s forest reserve and water bodies.

The largest opposition party says it does not believe President Akufo-Addo is committed to the fight against illegal mining.

Addressing a press conference in Accra on Thursday, October 6, the National Communications Officer of the party, Sammy Gyamfi claimed that the President's fight against galamsey is nothing but a scam.

“We have always maintained, that as far as we are concerned, and as the evidence bears us out, the Akufo-Addo/Bawumia/NPP government has not exhibited any genuine commitment to the fight against galamsey. And that their so-called fight against “galamsey” is nothing but a scam,” Sammy Gyamfi said.

According to him, it is the view of the NDC that the single most important thing needed to wage a successful war against illegal mining in Ghana is the political will of the duty-bearers of the country to confront the menace and all the dark forces fuelling it, regardless of whose ox is gored.

He told the press that if President Akufo-Addo wants to be taken serious on his pledge to fight the galamsey menace, he should begin by shutting down the operations of illegal mining companies including Akonta Mining Limited, a company which reportedly begins to Chairman Wontumi.

“We demand that all the so-called illegal mining companies like the Akonta Mining Limited which belongs to Chairman Wontumi and Heritage Imperial Mining Company which belongs to Mr. Donald Enstuah, a known financeer of the NPP who have invaded forest reserves without any mining leases or permits, must be closed down and prosecuted. The assets of these companies must be confiscated and their owners surcharged with costs of the destruction of those forest reserves,” Sammy Gyamfi told the press.

He further indicated that the NDC wants the President to ensure military personnel complicit in illegal mining are dealt with.

“We demand that all security personnel complicit in illegal mining activities should be made to face internal investigations and discharged from the various services to serve as deterrent to others,” the NDC National Communications Officer added.

The NDC is of the view that until President Akufo-Addo takes these actions, his renewed fight against “galamsey” will remain a mirage and he will be remembered by posterity as the President who promoted illegal.