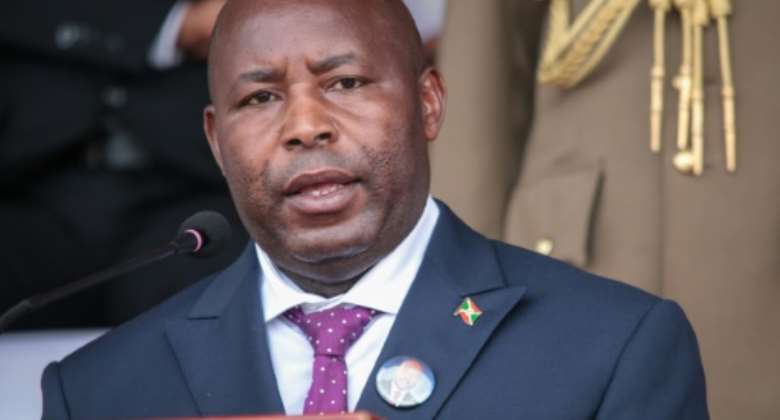 Burundi's President Evariste Ndayishimiye sacked his prime minister and a top aide in a high-level purge Wednesday after warning of a "coup" plot against him.

Ndayishimiye, who has been in power for just over two years, gave no reasons for Bunyoni's dismissal, but last week warned of a coup plot.

"Do you think an army general can be threatened by saying they will make a coup? Who is that person? Whoever it is should come and, in the name of God, I will defeat him," Ndayishimiye had warned at a meeting of government officials on Friday in the political capital Gitega.

The fate of Bunyoni, a former police chief and security minister who has long been a senior figure in the ruling CNDD-FDD party, was not immediately known.

Ndayishimiye's new chief of staff -- a post sometimes described as a "super prime minister" -- is Colonel Aloys Sindayihebura, who was in charge of domestic intelligence within the National Intelligence Service.

Lawmakers had been called to attend the National Assembly session on Wednesday via urgent messages sent overnight on WhatsApp.

Analysts say a cabal of military leaders known as "the generals" wield the true political power in Burundi and the president himself alluded to his isolation in a 2021 speech.

Ndayishimiye, 54, took power in June 2020 after his predecessor Pierre Nkurunziza died of what the Burundian authorities said was heart failure.

He has been hailed by the international community for slowly ending years of Burundi's isolationism under Nkurunziza's chaotic and bloody rule.

But he has failed to improve its wretched record on human rights and the African Great Lakes nation of 12 million people remains one of the poorest on the planet.

Nkurunziza had launched a brutal crackdown on political opponents in 2015 that left 1,200 people dead and made Burundi a global pariah.

Map of Burundi, showing Gitega and Bujumbura. By (AFP)

The turmoil erupted after he had launched a bid for a third term in office, a move the opposition said was unconstitutional and violated a peace deal that ended the country's bloody civil war in 2006.

The United States and the European Union had imposed sanctions over the unrest that also drove 400,000 people to flee the country, with reports of arbitrary arrests, torture, killings and enforced disappearances.

Ndirakobuca was among those sanctioned in 2015 by the United States for "silencing those opposed" to Nkurunziza's third term bid.

Burundi has been in the grip of an economic malaise since the 2015 unrest, with a lack of foreign exchange and shortages of basic goods such as fuel, certain foodstuffs, building materials and medicines.

In February, both Brussels and Washington resumed aid flows to the landlocked nation after easing the 2015 sanctions, citing political progress under Ndayishimiye.

Civil society groups have returned, the BBC is allowed to broadcast again and the EU -- Burundi's largest foreign donor -- has commended efforts to fight corruption.

But concerns over rights abuses remain.

Human Rights Watch in May described politically motivated murders and kidnappings by police and state-backed youth groups, while a UN inquiry last year characterised the situation as "disastrous".

Since independence in 1962, Burundi's history has been littered with presidential assassinations, coups and ethnic massacres.

It was gripped by a brutal civil war from 1993 to 2006 between majority Hutus and minority Tutsis that left some 300,000 people dead, mainly civilians.

OSP not enough to win the fight against corruption — Micheal...
31 minutes ago