The Ugly Face Of Corruption In Ghana 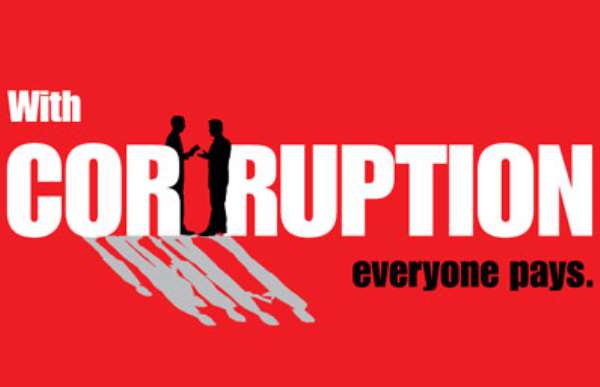 Recently I posted a questionnaire on http://.ghananow.whatsonghana.com and requested for response from Ghanaians. One of the questions was: What do you think is Ghana's main problem? It would surprise you that all the respondents to questionnaire mentioned corruption. It appears no single week goes of without the GHANAIAN CHRONICLE reporting on an issue of corruption. Corruption has become everyday phenomena in the country. Corruption is a difficult word to define. A country like Ghana where most corrupt practices have been institutionalised it is difficult for some of us to accept an American or British definition of corruption. The truth is that corruption is corruption and truth is absolute.

Corruption is one of the most deadly social and ethical problem facing Ghanaians. One does not need to cast his or her eyes far to see corruption. It is also with us in Ghana as our cedi is with us everyday in our buying and selling.

For the purpose this feature corruption in Ghana can be classified into three levels. We can talk of white level, civil level and everyday level. The white level is the corruption lurking in the corridors of sitting governments-over pricing of government contracts, diversion of state funds to fund political activities, misappropriation of public funds etc.

The civil level corruption is found in the private sector. The last one and the most cancerous one is the everyday level corruption. On this front, we see Police officials collecting bribes from commercial drivers, parents bribing headmasters and headmistresses of the elite schools to get academic placements for their wards. It is common place in Ghana that to get things done, one has to grease the palm of an official before a duty for which the official is paid, can be done. Customs officers demand bribes from traders at ports of entry. Commercial drivers instead of paying the full amount at toll booths pay half of the toll, which goes straight into the pocket of the toll teller and the drivers are obviously not given receipts to show for what they paid. At end of the day the toll teller amasses millions of cedis for himself leaving the road fund way short of expected revenue. The most agonizing thing about corruption in Ghana is that the very institution that has to keep the flames of integrity and transparency kindling has aligned itself this cancerous act. The Judiciary is tragically caught in a clutches of corruption The recent findings from the Ghana Integrity Initiative and The Centre for Democracy and Development paint terrifying face of corruption in Ghana. The CDD 2000 Governance and Corruption Survey shows that approximately 75% of households see corruption as a serious problem in Ghana, with a majority (66%) paying 10% of their incomes (within the ¢ 1-5 million income bracket) in bribes to public officials. 44% of firms admit to making unofficial payments to public officials, with 27% frequently or always making such payments.

Gradually, the whole society in Ghana is conforming to the drumbeat of corruption. and those who want to stand upright and be counted are seen as maladjusted, as we say in psychology. The popular saying goes: “Everybody is paying so why not pay and be free”, as if paying a bribe really makes one free. On the contrary, we are crippling ourselves and our nation. The political leaders have lost the will to fight against this cancer that this eating into the vital part of our national image. The recent APRM report on Ghana lambasted Ghana for our weak institutional structures in fighting corruption.

Anytime there is a military takeover in the country the reason advanced by the military usurpers is that the administration was corrupt. We are all living witnesses to corruption in Ghana during the General I.K Acheampong's regime were told that a ship full of cocoa meant for export had gone missing. Later the ship was found but not the content. What an irony? In 1995 when the CHRAJ found some members of then ruling party of corrupt deals the government of the day issued a white paper to cover them.

When President Kufour was being inaugurated on the January 7th, 2001 he made a resounding declaration that “there will be zero tolerance for corruption in his government”. Ghanaians were happy thinking that the administration had come to inject haemoglobin of honesty and transparency into the veins of the Ghanaian politics but after the trial and conviction of Mallam Yussif Yaya then Minister of Youth and Sports and others for causing financial loss to the state the steam for the zero tolerance for corruption died down. The anti corruption steam of President Kufour has come to the freezing point of zero degrees. One is not wrong when one says that within the Kufour's regime anti-corruption crusade has been retrogressive instead of progressive. When allegation of corruption is reported the president would say that if you can provide evidence the case would be investigated.

At the 2005 parliamentary vetting of ministers, it came out that Dr Anane when sent to the US on made an adulterous relationship with lady which resulted in pregnancy. It came to light that the Dr Anane wired a whooping sum of tens of thousands of dollars to the lady to take of the son. When he appeared before the committee he said that the money came from a friend who decided to do good on his behalf. One would expect that the president who was holding the sacred sword of anti-corruption high to withdraw the nomination of Dr Anane and commission an investigation to the allegation. The question we should ask is: what caused the alleged friend to do good on behalf Dr Anane? Don't we think this will allow the so called friend get an unwarranted favour from the minister at the expense of the tax payer? So far President Thebo Mbeki of South Africa has proved to the world that he does not just talk glibly about corruption but he has the tenacity to fire his deputy because of corruption charges. He has set a good precedent.

So after near 50 years of nationhood there is where we are. Corruption has become a major problem in the country. Before a contractor is given a state contract he/she must agree to pay some percent of the contract sum either to the sector minister or the district chief executive or into the ruling party account. This practiced has been evidence in the shoddy work we see around. Appiah Kusi Adomako is a freelance writer and the president of the Ghana Chapter of Leaders of Tomorrow Foundation. He can be contacted through: Leaders of Tomorrow Foundation, P.O. BOX. KS 13640. Kumasi. Tel 027-740-2467 Email: [email protected] . www.interconection.org/lotfound Views expressed by the author(s) do not necessarily reflect those of GhanaHomePage.