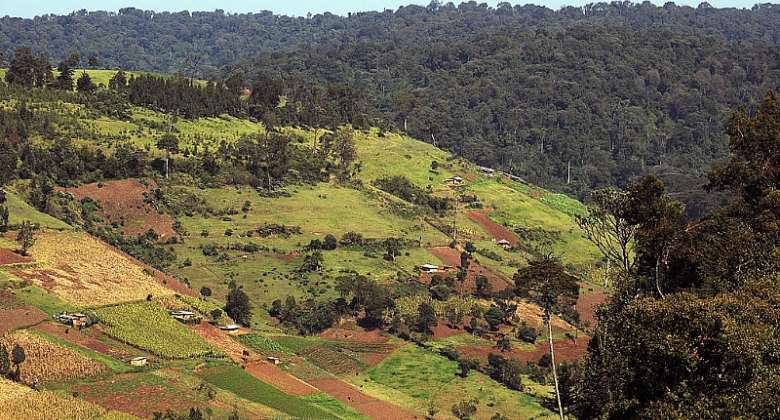 A section of Kenya&#39;s Mau Forest complex that has been cleared for human settlement. - Source: Roberto Schmidt/AFP via Getty Images)

The Mau Forest Complex is the largest montane tropical forest in East Africa. This is an ecosystem with rich biodiversity and characterised by high rainfall.

The Mau Forest's 380,000 hectares have witnessed a long and tormented history of human habitation. It's a territory hotly contested.

The management of the forest is a key issue in every political election, just like it was in the run-up to Kenya's 9 August 2022 poll .

Our research has found that state interventions in the Mau Forest over the last 100 years have been designed to serve specific political-economic interests, rather than to conserve the ecosystem.

There are three key historical periods that are representative of how Mau Forest management policies have been used to pursue political goals. These three periods are the 1930s and 1940s when Kenya was still a British colony; the 1980s in the wake of political liberalisation; and the 2000s when nature conservation policies took centre stage in national politics.

These periods exemplify how past interventions affect present issues. They show, too, how national and international dynamics play out in forest management in Kenya.

The legacy of colonial forest management practices, post-colonial politics of clientelistic land redistribution and the politicisation of forest conservation have made the Mau Forest one of the most controversial areas of Kenya.

The evictions carried out in the Eastern Escarpment and in the Maasai Mau between 2019 and 2020 , for instance, illustrate these political dynamics.

The Mau Forest in colonial times

The several forest sectors that make up the Mau Complex were gazetted as protected areas during the 1930s and 1940s.

The strategic importance of the Mau Forest was that it was at the heart of the “ White Highlands ”, as they were called then. These were the most fertile parts of the country, and where the British colonialists settled.

Demarcating the Mau Forest as a protected area became the legal premise for repeated evictions of the native Wadorobo, today known as the Ogiek. These were groups of hunter-gatherers and beekeepers who lived as semi-nomads within the forest.

The colonial government established native reserves to better control the territory. These also served as sources of cheap labour and helped prevent Africans from squatting on the British farms adjacent to the forest. By evicting the Wadorobo from the Mau Forest, the colonial government sought to sedentarise these few thousand people by settling them in native reserves.

The policy of population exclusion in forest management was inherited by the independent Kenyan government in 1963. Policy narratives, however, went through several changes as new political priorities arose.

In the 1990s, African countries faced pressure from international institutions to implement “good governance” reforms . These were set as preconditions to access development aid. They included multiparty elections, privatisation of state corporations and decentralisation of services.

In 1991, these international influences led to internal pressures, resulting in, among other things, the reinstatement of multiparty politics . This saw the then-authoritarian regime of President Daniel Moi – in power from 1978 to 2002 – devise strategies to stay in control. They included distributing land to buy political support .

Against this background, the Kenya Indigenous Forest Conservation Programme (1991-1994) was rolled out in the Mau Forest. It was intended to involve local communities in state policies of forest management. It recommended the settling of the few thousand Ogiek people who lived in the forest in designated areas.

The programme, however, became part of the politics of nature conservation. Moi's government subverted its original purpose, using its recommendations to turn 61,000 hectares of protected forest area into settlement schemes. This was ostensibly for accommodating the Ogiek.

The operation was instead used to allocate land to thousands of Kalenjin people – an umbrella group reassembling agro-pastoralists living in the Rift Valley. Forest land was also allocated to a small circle of the country's economic, military, administrative and political elite.

In the 1990s, extensive forest destruction was state-driven and geared towards a particular political goal. The massive transfer of Kalenjin people and personal allocations were meant to make Nakuru district, in the Rift Valley, a regime-aligned electoral constituency. Moi needed to secure a seat for his party Kanu in the area, which was dominated by the opposition.

The politics of Water Towers

By the turn of this century, the Mau Forest had became the exemplification of illegal allocations effected by the Moi regime. National civil society organisations started to hold campaigns against rampant land grabbing. Among the activists who stood out were the 2004 Nobel Peace Prize awardee Wangari Maathai .

These land grabs were later documented in the 2004 Ndung'u Report .

The year 2002 was a political landmark for Kenya. The 40-year regime of the ruling party, Kanu, ended with the election of Mwai Kibaki as the country's third president. In 2008, in the wake of a power-sharing agreement following post-election violence , Raila Odinga was appointed prime minister, while Kibaki retained the presidency.

Under Odinga's initiative, rehabilitating the Mau Forest became a government priority. The United Nations Environment Programme played an important role in this process by exposing the drastic reduction in Kenya's forest cover.

A task force was established. Its report , released in 2009 and endorsed by parliament, painted a grim picture of the decade-long destruction of the Mau. It designed a plan to restore and rehabilitate the forest.

In 2012, the Mau Forest Complex and other forests were given new status as Water Towers. These are key forest ecosystems that serve as reservoirs and supply water for the country's rivers and lakes. This status established their national importance.

The start of this rehabilitation phase resulted in settlers' evictions from the Mau Forest. However, members of parliament from the Rift Valley mobilised protests to halt evictions and call for compensation.

President Uhuru Kenyatta and his deputy William Ruto – who at the time were ministers for finance and agriculture, respectively – were part of this mobilisation.

The fear of deforestation contributing to the drying up the Mara River – located in Narok County – is often advanced as the main reason for conserving these forest sectors. However, evictions occurred in the wake of cracks within the government .

These interventions demonstrate the extent to which political interests have informed, and continue to inform , conservation policies in the Mau Forest.

Stefania Albertazzi receives funding from the University of Milan and in the past from the British Institute in Eastern Africa and the Italian Agency for Development Cooperation.

Francesca di Matteo works for the French Institute for Research in Africa, Nairobi.

By Stefania Albertazzi, Postdoctoral fellow, University of Milan And

More from Article
ModernGhana Links
Uganda's Owen Falls dam: a colonial legacy that still stings, 67 years later
How Every Woman is a Beauty Queen Made
Zulu monarchy: how royal women have asserted their agency and power throughout history
TOP STORIES

You're a strong tree; you'll stand through every storm — Kof...
26 minutes ago

Claims linking Akufo-Addo to galamsey are slanderous, plain ...
50 minutes ago