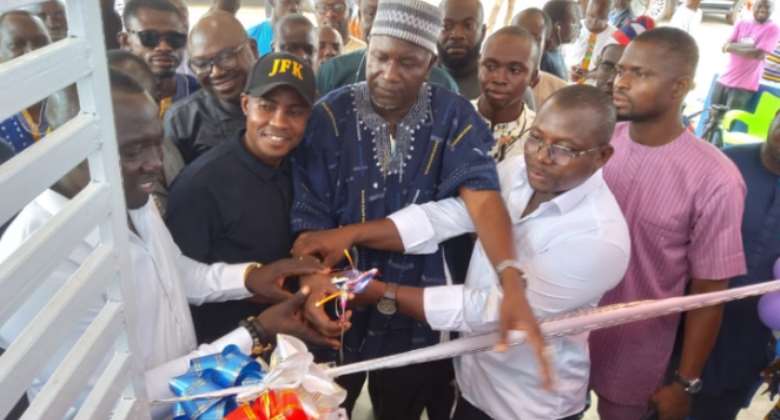 The New Patriotic Party NPP in the Savannah Region on Saturday, August 13 2022, commissioned a temporal secretariat in Damongo to enhance party activities.

The cutting of the ribbon was done by the Regional Chairman of the party Alhaji Iddrisu Sulemana Kalamonia supported by the regional secretary, Mr. Mohammed Issah and other regional and constituency executives.

Addressing news men on the sideline of the inaugural ceremony, the Regional Secretary, Mr. Mohammed Issah said the construction of the temporal office forms part of the Regional Executive Committee's resolve of ensuring proper coordination of the party's activities in the region.

He said it was to also facilitate party administration as plans are advanced towards getting a permanent secretariat in the not too distant future.

He explained that the structure is also in fulfilment of a campaign promise made to delegates in the run up to the party's regional delegates conference.

According to him, the secretariat was built by the Regional Executive Committee with support funding from the MP for Damongo Lawyer Abu Jinapor and the Managing Director of the Ghana Water Company Ltd, Dr. Ing. Clifford Braimah.

He believes the construction of the edifice with the sole aim of ensuring proper coordination of the party's activities. He added that, the party in the Savannah Region will accomplish its resolve of making the region a strong hold of the governing party.

In turn, the regional chairman, Alhaji Iddrisu Sulemana Kalamonia asserted that the edifice is to serve the interest of the youth of the party aimed at increasing its support base in the region.

In attendance to grace the inaugural ceremony were both regional and constituency executives and other stalwarts of the party.