Why The IGP Must Be Applauded 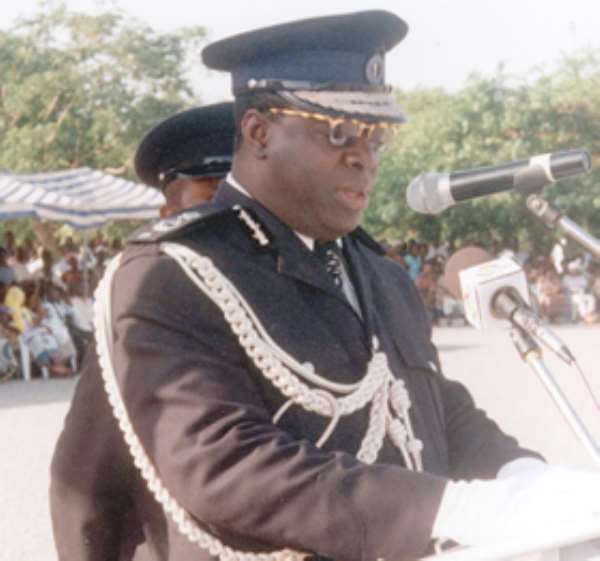 The problems with democracy in developing countries are multifaceted, but one of the key areas of conflict is the relationship between the police and politicians or government of the day.

The police service as part of the organs of government is expected to play its assigned role within the established framework. However, at no time in the political history of Ghana have we seen the police completely detached from the government of the day. In several instances past governments have manipulated the police to do their dirty jobs, and these instances have cemented an image of the police service as lacking independence. In the eyes of the people, the service is nothing but a brutal and heartless entity, lacking principles when it comes to protecting the people.

With the advent of democratic governance since 1992, the police administration has not convinced Ghanaians that they have moved away from political leanings to the detriment of our democracy. Although the climate change has long been coming and pointing to the direction of the police administration shying away from colouring their operations with political colours of the ruling government, it is certain that it will take a while before a such a level of independence is achieved in Ghana.

Nonetheless, the events of the last week precipitated by the detention of the TV Africa crew in the Hotel Kuffour saga, brought out the best in our police administration. It is the first time perhaps in our democratic history that the head of the police service has publicly apologized for the misconduct of personnel in relation to a very sensitive issue close to the heart of the rulers of the day. Mr. P.K. Acheampong needs to be applauded for such a bold and honest move, which I also firmly believe is sincere, in the context of the expectations of those who put him in this noble position, and the counter-expectations of the people of Ghana.

On reading the news of his appointment as IGP, my intention was to write a script about why I thought Mr. P.K. Acheampong was the man for the job of Inspector General of police. My article was to be based on my personal experiences (while I taught in Tamale Training College and worked with the Student Associations) with his qualities and leadership style from the late 1980s to the mid 1990s.

Mr. Acheampong, as one of the best-educated and honorable personnel of the Ghana Police Service demonstrated during his service periods in Tamale and Kumasi that he was an embodiment of intellect, passion, honesty, humility and principle. Above all, he was sincere and patient in negotiating, providing ideas to student groups, and achieving positive results. I always thought that he would make a good and exemplary IGP for the reason that it is very rare to see such qualities in one man these days.

However, the reason for my hesitation to write about his potential was to avoid criticism from people who would have attacked my evidence as based on a subjective unverified history. Following this week's, formal apology to the journalist and media association in relation to the detention of the TV Africa crew, I began to piece together the many important positive decisions /acts of his brief period as IGP, and feel confident that my prediction is heading for confirmation- P.K Acheampong is the man for the job.

A quick recount or throw-back at some of his important decisions shows that he is championing reforms in several sectors of the service including the reshuffle /transfer of police personnel who have been at posts for 20 years, the reform in training requirements, and the provision of more efficient equipment for the service. In fact several police personnel who stayed at stations for too long were no longer effective because they had become familiar with the communities' populations, and some became part of the problem with the administration of justice. The move to reshuffle them has therefore been in the interest of ensuring effectiveness in the work of the police; one that will enhance confidence in the service and ensure that the rule of law prevails.

It is significant that the opposition (NDC, CPP PNC) and people in Government jointly applaud the IGP for calling a spade a spade in the matter of the detention of the TV crew who were just doing their job. The notion that a police administration will only do what the government of the day wants will prevail if the IGP and personnel of the service do not know where the limits of their roles preclude their acting otherwise. With the proposed reforms in the police service, the personnel should know better about the roles vis avis political issues. If the police were this knowledgeable and firm in the past, many injustices (including Kumi-Preko) meted out to law abiding citizens who were engaging in legitimate political events would not have occurred. To me, this current case (Hotel Kuffour / arrest of TV Africa Crew) is the beginning of a new phase in our democracy, with the potential that in the future some police personnel may be charged for acting outside of the law/ infringing on civil liberties. All said and done, 'Kudos to the police administration!!'.

At this stage and into the future, it is important that our politicians strive to provide multi-partisan support to the IGP to carry out the needed reforms and to support Ghana's evolving democracy. Views expressed by the author(s) do not necessarily reflect those of GhanaHomePage.