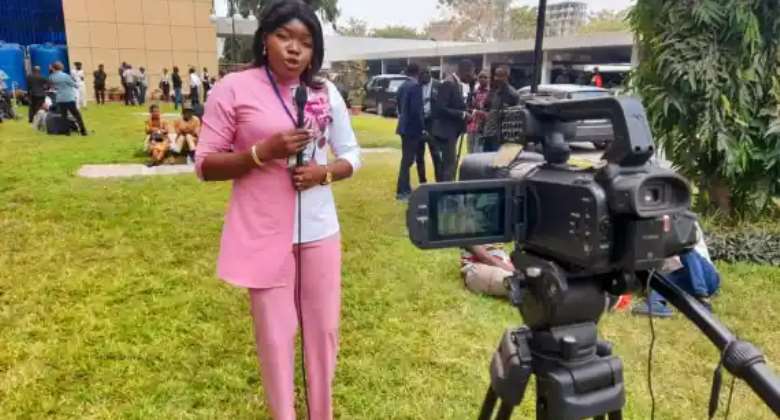 Unidentified men attacked Fify Kibwana, a reporter with Vert Pâturages, as she conducted interviews outside a court in the capital Kinshasa on August 2, 2022, in the Democratic Republic of Congo. (Photo: Cea Mbamvu)

Kinshasa, August 9, 2022—Congolese authorities should thoroughly investigate the recent attacks on journalists Daniel Aloterembi and Fify Kibwana and hold those responsible to account, the Committee to Protect Journalists said Tuesday.

On July 28, a group of police officers at a court in Kinshasa, the capital, attacked and seized two phones belonging to Aloterembi, a reporter with the privately owned Mediacongo.net news website, and threatened him with arrest, according to the journalist, who spoke to CPJ over the phone, and a report by his outlet, which is owned by Congo-press.com (MCP).

Aloterembi was covering a hearing involving opposition politician Jean-Marc Kabund when officers chased and punched him, stopped him for around five minutes on the street, and then let him go after seizing his phones and the equivalent of US$3 in cash, according to those sources.

Separately, on August 2, unidentified men in Kinshasa attacked Kibwana, a reporter with the privately owned Vert Pâturages television broadcaster, as she interviewed people outside the same court during another hearing involving Kabund, according to the journalist, who spoke to CPJ over the phone, a video of the attack that CPJ reviewed, and a report by the local press freedom group African Press Freedom Observatory (OLPA). Unidentified men pushed Fify Kibwana, a reporter with Vert Pâturages, pulled her scarf, and verbally threatened her outside a court in the capital Kinshasa on August 2, 2022, in the Democratic Republic of Congo. (Photo: Cea Mbamvu)

Those men—who identified themselves as supporters of the Union for Democracy and Social Progress (UDPS), the political party of President Félix Tshisekedi—pushed her, pulled her scarf, and verbally threatened her for conducting interviews with activists who supported Kabund and criticized Tshisekedi, the journalist told CPJ.

“Congolese authorities should thoroughly investigate the recent attacks on journalists Daniel Aloterembi and Fify Kibwana and hold those responsible to account,” said Muthoki Mumo, CPJ’s sub-Saharan Africa representative, in Nairobi. “When journalists are attacked by security forces or political activists, it sends a chilling message to reporters seeking to cover newsworthy events. Such attacks are part of an alarming trend in the DRC.”

Police shot tear gas canisters at journalists and Kabund’s supporters while Aloterembi was covering the court, but the journalist told CPJ he was not injured by the gas.

Aloterembi told CPJ that he wore a press jacket with the Mediacongo.netlogo and his press identification around his neck. After officers stopped him, Aloterembi told police that he was a journalist who came to cover the hearing and showed them his press card. In response, the officers said that they knew he was a journalist, but if he refused to give up his belongings “we will take you in the [police] jeep.”

Aloterembi said he did not sustain serious injuries when police punched him, and said his phones and money had not been returned as of August 9.

Sylvano Kasongo, the Kinshasa police commissioner, told CPJ over the phone that an investigation was underway to identify the officers responsible for attacking Aloterembi.

Kibwana said the men who attacked her followed her as she sought refuge in her car, and that she was only able to escape and hide in a nearby church with the help of her camera operator. She was not injured in the attack, she said.

CPJ repeatedly called UDPS Secretary-General Augustin Kabuya for comment, but he did not answer.