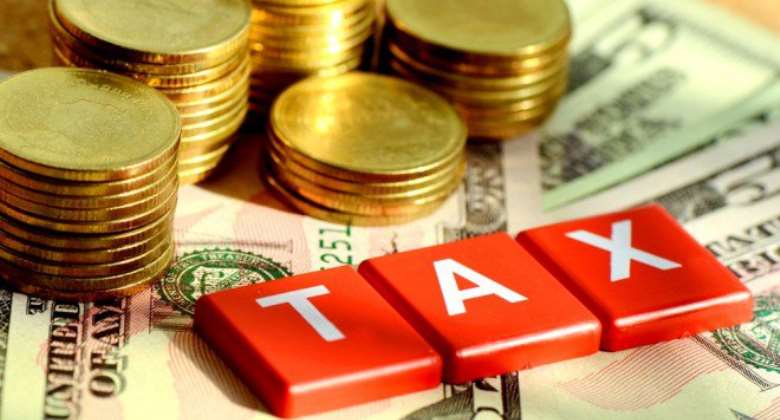 To a significant part, Ghana’s domestic tax revenue mobilisation system is analogous to fetching water into a basket of holes. It is unfortunate how Ghana can lose $2 billion to revenue leakages in 2020 alone, according to the Auditor General’s Department, and be seeking almost an equivalent amount in an IMF bailout barely two years later. In a cross-country study by Robert Dauda Korsu for ECOWAS countries in 2021, Ghana’s average tax revenue leakage to GDP from 2001 to 2015 was quantified at 1.7%. At 1.7% of GDP, Ghana’s tax revenue losses due to revenue loopholes is higher than the average contributions of the fishing sector, forestry and logging sector, electricity, water and sewage sectors, professional, administrative, and support service activities sectors over the period from 2001 - 2015.

More compelling is how tax revenue leakages have affected our domestic balances over the years. Based on data from the Bank of Ghana and tax leakage estimates by Korsu (2021), the Research, Policy and Advocacy Unit of the African Graduate Economic Network for Students International (AGENTS Int’l) analyzed the impact of the tax leakage on Ghana’s domestic primary balances to real GDP from 2001 - 2015. The extent of domestic primary deficits incurred, which could have been avoided by addressing tax revenue leakages, is summarized in the figure below. 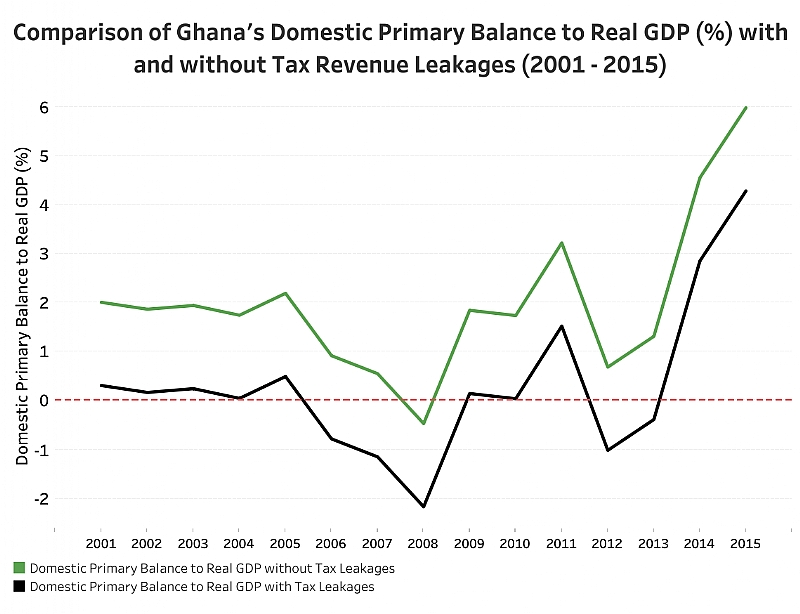 Source: Prepared by the Research, Policy and Advocacy Unit of AGENTS Int’l, 2022

From the graph, the lower (black) line graph represents the actual domestic primary balances to real GDP in the presence of tax leakages. The green line shows the improvement in our domestic primary balances if tax revenue loopholes are addressed. The gap between the line graphs shows the average tax revenue leakages to real GDP from 2001 to 2015. It is striking to realize that Ghana would have recorded only a single deficit (i.e., about 0.5% in 2008) in the absence of tax leakages. This emphasizes the deleterious impact of revenue leakages on our revenue mobilization efforts.

According to the Institute of Fiscal Studies (IFS), Ghana’s domestic revenue to GDP ratio remains far below its sub-Saharan African peers (IFS, 2018). This suggests a gap between the optimum tax revenue that could be collected given the country’s economic and structural characteristics and what is being collected hence leakages in the tax system. This leakage mainly comprises tax avoidance, evasion, and corruption (Vicente, 2006). As noted by Ghana’s current president and verified empirically, a significant culprit is tax avoidance (our tax exemption regime).

To a large extent, in Ghana, our tax exemption regime is politically driven in favour of political biases. The President, in 2019, condemned the nature of our tax exemption regime even though the regime change he promised has not materialized yet. A report published by the IFS suggests that while in 2016, the Ministry of Finance intensified its oversight to limit the use of special permits which exempt imports from Customs duties and VAT, total exemptions stood at GH¢2.26 billion at the end of the year; a 10% increase from the previous year’s exemptions of GH¢2.06 billion. In 2017, total tax exemptions amounted to GH¢2.57 billion, representing nearly half (47%) of the total import duty collected for the year. In his ‘State of the Nation’ address before Parliament in February 2019, just like in 2017, the President said, “if we continue at this rate, in less than sixteen years, half of Ghana’s revenue base will be given away as tax exemptions.” However, in February 2022 alone, the government moved to grant tax exemptions to the tune of US$100 million.

While there are other drivers of our tax revenue leakages, such as corruption and tax evasions, the solution begins with leadership by example. Sustaining an arbitrary tax exemption regime that is less subject to scrutiny while seeking to introduce new taxes or broadening the base of existing ones only dampens willingness to pay. On this note, we are happy that Ghana’s Parliament has finally passed the tax exemptions bill awaiting assent from the President. When assented by the President, this law will be crucial in determining the practicality of the exemptions, engendering transparency, and promoting goodwill for tax payment and nation-building.

More from Business Features
ModernGhana Links
4 out of 5 Africans say recent developments in African technology has changed how they view the continent
British magazine The Economist stresses Ghanaians' disillusionment with the government's financial measures
AfrikPage.com one of first English and French online newspapers in Ghana
TOP STORIES