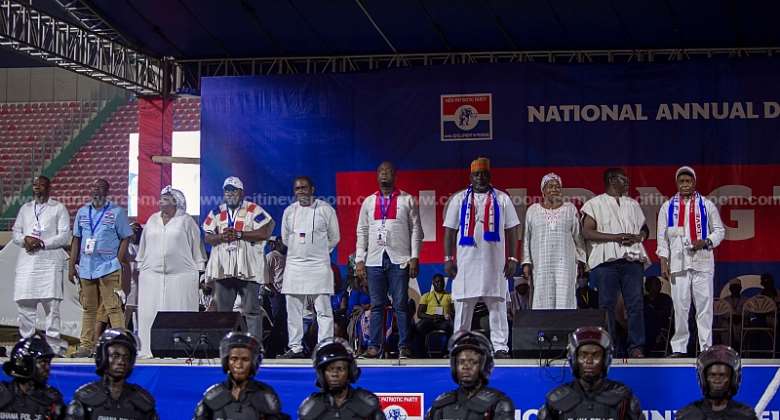 “To everything there is a season, a time for every purpose under the heaven - Ecclesiastes 3:1.”

It is so good to learn that the national delegates conference of the New Patriotic Party (NPP) has successfully come to an end amidst mixed feelings. Everything is over and now the party has elected a new breed of national executives. The conduct of the election has been evaluated by majority of people including even the pessimists, and have rated it as highly peaceful, more friendly, though associated with unnoticed and latent tension within the individual aspirants. The greatest achievement is that the elections was free and fair as against the evil intended outcome expected by the pessimists, praying that it should end in warsome; above all, the negative rumors for the raining of brimstone and fire after the announcement of the results have all been proved futile. And personally, I believe that God has spoken through the delegates; and now a new breed of executives has been elected to take over the mantle of leadership for the NPP, getting poised to face the 2024 presidential and parliamentary elections. And now to the big question: “Can the party truly break the eight?”

Naturally, there is always an overwhelming joy in winning an election; corollary, those who lose go through excruciating pains and disappointments, but what members of same united party (NPP) realize and feel behind the scene is that no one is neither a winner or a loser. That is why the first very important and necessary hurdle to clear is for the newly elected executives to do everything within their ability to soothe all pains from all sides and unite genuinely with their former executives and then together work for the common goal – winning the 2024 elections by breaking the eight.

It is noteworthy to remember that the political and administrative pendulum of this universe usually, but normally not in all cases, swings to and fro in order to bring in the ability of those who can successfully continue from where their predecessors reached. However, those who belong to the Christian faith believe that God appoints people to higher and different positions according to their abilities (Ephesians 4:11-13). Therefore, I strongly suggest to you not to put your trust on your human plans and methods; do not lose sight of your dependence on God (Allah for the Muslims); do not throw your weight about as if you are greater than your Creator, because doing so will put you in a seriously “dangerous danger” in the near future. You should be mindful of the real fact that you are working with people at the grassroots; do not neglect them and feel that they are just the ordinary riff-raffs. They form the majority number of the kingmakers of the party, and not the regional and national top hierarchy. You have reached the pinnacle of the NPP administration by the support of the grassroots. Therefore, never, never underrate the importance of the grassroot folks. You can walk over them today, and in response, they will also walk over you tomorrow. This is my ardent admonition to my new executives. So, a word to the wise in enough.

The NPP should note that “breaking the eight” is a wonderful slogan which sends deadly shocks in the spine and veins of some of the members of other opposition parties. But you should be aware that mere recitation of the slogan is useless unless it is backed up by strong pragmatic strategy very easy to understand and be accepted by the Ghanaian electorate. Therefore, as soon as you set yourselves in the office, begin to work for the achievement of this great objective (breaking the eight). Start now, there is the urgent and immediate need to restructure your communication strategies. Arm yourselves well with your political dynamites and bullets before you attend any of your TV and FM discussion programs so as to be able to destroy the evil postulates of the propagandists. I humbly suggest to you to adjust your communication tools and charge the team to device piercing means of reaching the entire Ghanaian electorate within all nooks and corners. The communication team should be well resourced, especially, with vital information needed to break the eight. You should not allow the propagandists to first throw in their deadly and false blow before you sit up to refute their false information, after all not everyone who first hears that false information would hear your genuine response presented later. Therefore, first ignite the system with true facts that cannot be challenged by any propaganda.

To the new NPP executives, don’t you feel that the party needs to review and revise her 1992 constitution due to the current national phenomenon? What was appropriate in 1992 when the party promulgated her constitution might not be rightly applicable now and the very near future as well. Is it impossible to change certain portions of the party’s 1992 constitution which can absolutely crucify the system which promotes the monetization in our party’s elections? No, it can be possible. Is it feasible to revise that same constitution in order to abolish the delegate system of voting and then allowing all NPP card-bearing members in good standing and have paid their dues to vote? Yes, it is very feasible. Then why did the outgoing executives cling to this “unwholesome” system of election, when they were obviously aware that they could have done something that would have abolished or eliminated the monetization of the party’s elections? Bribing over three million members in order to win a position in the NPP would forever become a thing of the past after these changes.

I personally believe that the outgoing executives could have done these changes easily, but for their own whims and caprices, they ignored to tackle that issue. It would interest all to note that the administrative dexterity of our newly elected executives would be determined by the test case of electing our presidential candidate, his vice and all our parliamentary candidates which is rightly ahead of us sooner. The maturity with which our new executives would conduct the vetting, supervise the conduct of the delegates, the way they would expose their support for some candidates, either confidentially or openly, then apply their veto powers over the choice of the grassroots will automatically judge the party’s success in the future. Begin to identify all our “problem constituencies” and deal with their concerns as a matter of urgency before it is too late, because this was one of the reasons why we lost “many” of our constituencies to the opposition NDC party.

I will implore our new executives to hold fast to what is good. Do well to sharpen your moral powers in order to kill any act of greed that would tempt you to scramble for wealth. As much as possible, and in the interest of the party, portray yourselves as very faithful stewards devoid of greed. Do your best to practice absolute self-control. Never debase your integrity by developing the passion for corruption; subdue your injurious gratification of lust for money, if any, and above all, seek the interest of NPP and Ghana first. You should critically look back to the history of some of your predecessors and adopt what were good about them; but more importantly, reject that boisterous infection and the ill-fated autocratic system of administration induced in some of them as alleged; finally, do not put yourself in a position where you would be afflicted with that fatal malady characterized by the state of wallowing in pride.

I wish you all the best and clean success in your new appointments.

Long live NPP. Long live, all those who think well and pray for the success of the New Patriotic Party. Long live Ghana.