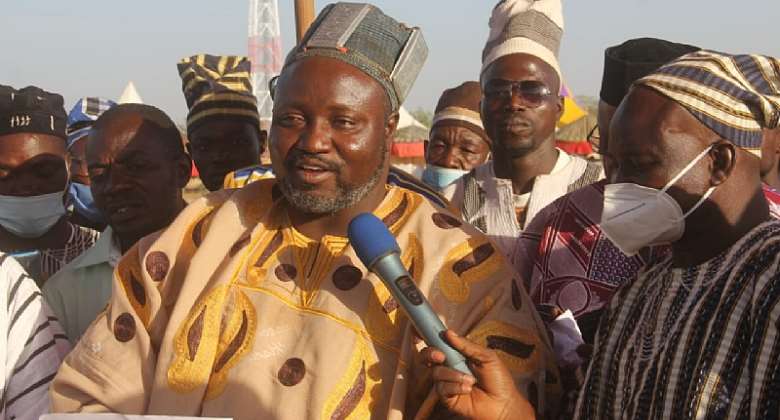 Ladies and Gentlemen of the Press

Let me on behalf of the Vice-President and members of the Upper East Regional House of Chiefs welcome you to this press briefing. This ceremony has been organized to enable the House to update the media and members of the public on the recent developments in the Bawku township with regards to the communal conflict there and to let Ghanaians know the position of the House on these developments.

In the last quarter of 2021, there was renewed escalation of the regrettably enduring conflict in Bawku. These skirmishes in the township aggravated in the run up to the Samampiid and the purported plans by the Mamprusis to observe the final funeral rites of the late Tampuri Alhaji Adam Zangbeogo, who is still recognized as the last Bawku Naba by the Mamprusis and subsequently celebrate the Damba. This has led to the loss of abled and productive lives and valuable property, stalled economic activities, and deprived several school children of an opportunity to pursue their future dreams. As a bustling economic hub of the east and Ghana, it has further worsened the woes of a country emerging from the ravaging effects of COVID-19 and its consequences on the national economy. It is from this background that the Chiefs of the Region wish to condemn in no uncertain terms these senseless and morally depraved criminal acts. It is saddening to note that since these clashes in Bawku in 1983, 1984, and 1985 all has not been well with the inhabitants of this growing township. The clashes have transformed, over the years into a war of attrition rather than an action to settle a chieftaincy dispute.

The Bawku conflict has a long history, perhaps rivaling Ghana’s struggle for independence and its political history. For more than 65 years, this conflict has been intertwined in issues of politics, ethnicity, land, and chieftaincy. It is no surprise that various political groupings have fed from the blood of its victims since the inception of the conflict.

From its onset, legal processes have been initiated, government commissions, traditional authorities and civil society organisations have all attempted to settle the matter. It is important to recall that the Supreme Court Ruling of April 2003 still remains the most remarkable attempt to bring finality to this ailing conflict.

Despite the political meddling in the conflict, it is worth noting that successive governments have equally played significant roles in ending the debilitating conflict through their unequivocal declarations on the matter in reference to the Supreme Court Decision. The most recent attempt initiated by His Excellency Nana Addo Dankwa Akufo Addo, by inviting the Nayiri and the Bawku Naba for discussions is highly commendable.

Ladies and Gentlemen, it is rather disappointing that these high-level interventions have yielded little results in resolving this devastating conflict. This has led us to reason that what we are experiencing in the area is organized crime orchestrated by people with doubtful integrity for their selfish interests. Crime is intolerable in any society and thus must be stamped out.

What is of particular concern to us in this Region is the attempt by some persons to associate the recent acts of lawlessness in Bawku with the desire of Nayiri, Overlord of Mamprugu, to maintain a hold in the Kusaug Traditional Area through violence and intimidation. It is our considered view that no ruler, whether traditional or secular, can thrive in power by means of violence and high handedness. That is why it is difficult for us to accept reports circulating in Bawku and elsewhere that those organizing and executing these acts of violence have the support and blessing of the Nayiri. The Nayiri is respected and we wish to call on those peddling these claims to desist from doing damage to His Royal name.

Ladies and Gentlemen of the press and all present, it is from this informed background that I and my fellow eminent chiefs of the region wish to put forward the following proposals for mitigating this cancer eating away our livelihoods and robbing the future of our children.

The Bawku-Naba, Zugraan Abugrago Azoka II has been on the skin for thirty-eight years now and a lot of goodwill and support has existed between the skin and the people of Kusaug. It is trite knowledge that the Bawku Chieftaincy Dispute has been settled through due process/ legal process. For the avoidance of doubt. We know that in 1957 the colonial Governor, Lord Listowell setup a committee of enquiry to ascertain the conflicting claims between the Kusasis and Mamprusis. The committee found that Bawku is a Kusasi land and that the present Bawku Naba’s family are the right descendants and rulers of the Bawku Skin.

This committee finding in favour of the Kusasi was upheld and confirmed by the Court of Appeal (the Highest Court of the land at that time) in 1958.

Despite the military intervention in the Bawku skin affairs in 1966 (NLCD 122) and in 1981 (by PNDC Law 75), the Supreme Court in 2003 affirmed the legitimacy of Naba Asigri Abugrago Azoka II.

Ladies and Gentlemen, In this regard, and with the support of my fellow esteemed chiefs of the House we wish to respectfully and kindly invite the Nayiri, our elder brother and father, some of the noble chiefs of this House and the Bawku Naba, also our elder brother and member of this distinguished House, to a round table meeting to be mediated by a selected group of eminent chiefs in order to dialogue and fashion out home-grown solutions to this monstrous conflict. Our people say that “for a witch to catch you, there must be one in your House”, therefore, let us come together to hunt down and banish this witch forever.

My Vice President, eminent chiefs of this House, the Press, ladies and Gentlemen,

In conclusion, we need peace in Bawku as any insecurity in the area affects the whole of the Upper East Region and the country in General.

Bawku being a border town with Togo and Burkina Faso is vulnerable to foreign terrorists, Jihadists and other criminals, hence our worry.

If our language is a bit hard, we beg everybody’s pardon for it is just that our sensibilities have been hurt.

I thank you all for your presence and support and for coming.

Latest Photo Reports
Catch up with all the political quotes from our politicians.
Advertise here
More from Headlines
ModernGhana Links
Ofori-Atta has been creative; needs to be supported – Gabby
Nana Akomea, thanks for your political honesty, our situation is actually a monumental embarrassment — Prof. Gyampo
Blame minority for Akufo-Addo's resort to IMF bailout; they frustrated e-levy for 6 months and gloating over it – Gabby
TOP STORIES