Greatness from small beginnings: The Accra Academy Journey as an example 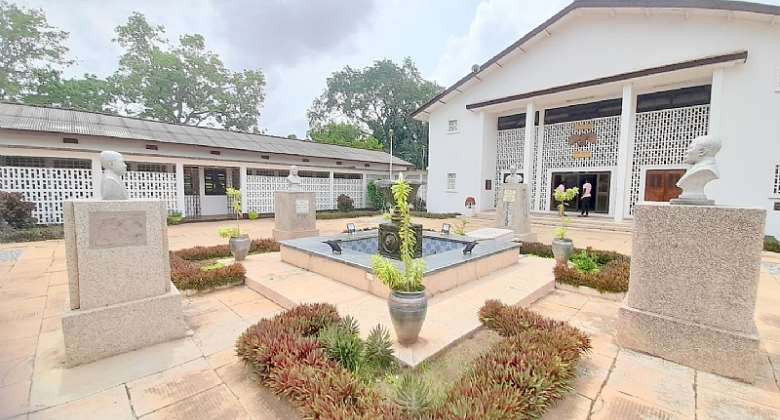 A picture of the Founders Court at Accra Academy (2021)

What is the anatomy of a great school? Does it have to do with its size, population, facilities, the quality of its teachers, the intelligence of its students or the contributions of its alumni to society? Or is it a combination of these factors or something else entirely? I leave that to you to ponder over.

Accra Academy was founded on 20th July 1931 with a start-up capital of £200 and was situated on less than an acre of land in James Town, but 30 years later, the Government stepped in to provide the school with new accommodation at a cost of over £180,000. The current value of the school’s immovable assets is even more costly and the school now sits on 35 acres of land at Bubiashie. When Accra Academy was founded 90 years ago, how many people would have imagined then that the school would have over 3000 students in enrolment today when it began with just 19 students?

And would the founders of Accra Academy have imagined that the school would one day have a teaching staff of 120 when they co-founded the school with only six teachers? And what about amenities? When the school was founded it had none. The only laboratory equipment available to staff and students were located in textbooks. The school had no recreational areas and no sports facilities. However, what we find today at the Bubiashie campus is a stark contrast to the limitations of the school’s past. Accra Academy now has science laboratories and a science resource centre, a multi-purpose tennis and basketball court, an astroturf football pitch built to FIFA standards donated by Asamoah Gyan, and several halls of residence.

Accra Academy was founded in Ellen House - which marked its centenary anniversary only 4 years ago. Ellen House was built by Mr. Vidal James Buckle, a distinguished lawyer of Sierra Leonean origin, in honour of his wife Mrs. Ellen Buckle. Mrs. Ellen Buckle, then widowed, leased out the building to be used to start the school. She also later vacated and leased out Claremont House so that the school could have a Boarding Department for students coming from outside Accra.

When the gradual process of converting Ellen House from a residential abode into a school was being carried out, the assembly hall was partitioned and used for separate classrooms. During lessons, students could hear sellers advertising their wares, buyers haggling over the prices of items, pedestrians conversing, and the sound of vehicles moving back and forth. Even more distracting was the tantalizing aroma of Kelewele, Ashaamomo and other varieties of food that were sold close by.

The Palace of the Akumajey Manche was also close to the School, and now and then, his subjects would begin to drum intensely. The situation was compounded by the variance in the tone of voice of the teachers, as some spoke in low tones and students in their class risked hearing what louder teachers in other classes were saying instead. Such was the difficulty with which the school had to create an academic environment, and yet it succeeded in doing so. Now, however, Accra Academy has a spacious and salubrious campus devoid of these challenges.

Accra Academy was founded to help parents who could not afford to send their wards to a boarding school, which was a marked feature of the secondary school system in the Colony at that time. The co-founders were all under the age of 30 years when they founded the school.

They visited prospective students living in the vicinity of Ellen House to entreat them to join the school. These would-be students were inspired by their qualifications and wanted to become as learned as the founders. Even dropouts from other schools were inspired to go back to school.

However, not all schools that started as private enterprises have stood the test of time. Accra Academy survived the turbulent early years of its establishment because of the tenacity of its founders and the support they received from good-hearted families and individuals in the community. These individuals saw a young school started by young entrepreneurs and they rallied to its support. They did not stand idly by and watch from the distance as spectators.

They wanted the school to succeed and to triumph. They did not wait for the Government to intervene but instead rallied to support the school in whatever way they could. Among them were the Bannerman Family, Blankson Mills, Mark Cleland Hansen, Mrs. Ellen Buckle and several other influential public figures working for the Accra Municipal Service and Town Council. The founders themselves took no pay but instead loaned their salaries to the school to ensure that it would survive. They also allowed students to pay their school fees in instalments and to have their arrears carried into the next term.

The students themselves were not afraid that the school would fail and that their efforts would be dashed; instead, they were energetic and determined. They were conscious that their performance in the Cambridge Examination would determine whether the school had been a success and, for that reason, were highly motivated to excel. Many of them went to school barefooted because in those days students from poor homes only wore shoes on Sundays when they had to dress up to go to church. Can you imagine walking from Osu or La to James Town barefooted and walking back in the afternoon under the scorching sun? And yet despite all the challenges of their time these students excelled in both the Junior Cambridge and Senior Cambridge Examinations. Their academic feats gave the public the assurance and evidence that the school was a success and this attracted many more parents to enrol their wards at the school.

Another individual who was instrumental to the success of the school was the Anglican diocesan bishop of Accra, the Rt. Rev. John Aglionby. He lobbied the Government for the school to become Government-assisted. However, the school was not given this status on a silver platter because Bishop Aglionby was calling for it. It earned it. As a result of Bishop Aglionby’s calls for Government support for the school, in 1946, the Directorate of Education sent inspectors to audit the School and they were impressed by the financial book-keeping it had maintained.

The School’s first audit report was so professionally done that it was published in all the local newspapers. That same year, the Gold Coast Committee on Higher Education proposed that the Accra Academy should be given Government assistance as a day school for boys and a grant for better buildings as part of the 10-year development plan of the Government. Later on, the diocesan Anglican bishop of Accra was given a permanent representation on the School Board. Bishops Daly, Roseveare, and Assistant Bishop Martinson all served on the Board of the Accra Academy during their time in office and contributed their knowledge to the spiritual and educational development of the school.

The greatness of a school is a combination of the factors I have already mentioned, and it can also be counted in terms of the contributions of a school’s alumni to society. For Accra Academy, we have a list too long to mention. Accra Academy has produced a Head of State, Chief Justices and Justices of the Supreme Court, Speakers of Parliament, Attorney Generals and Ministers of State, Educationists and Legal luminaries, Athletes and Sportsmen, Captains of Industry and Media Moguls, Health care professionals and Entrepreneurs, and many other sons and daughters in various other fields of endeavour, whether at home or abroad.

The Accra Academy journey is an example that greatness can come from small beginnings. This journey should serve as an inspiration and hope to fledgling schools facings difficulties now, that they too can achieve greatness. The story of Accra Academy should also be a motivation for good-hearted individuals, groups, and organisations to support schools facing difficulties in their communities. If we all work towards this, Ghana as a whole would become better for it.

Latest Photo Reports
Catch up with all the political quotes from our politicians.
Advertise here
More from Opinion
ModernGhana Links
Collective Efforts Must Ensure Ghana Wins!
A Reflection About The Chucrh And Its Employees
Thomas Amissah writes: IMF does not impose conditionalities
TOP STORIES