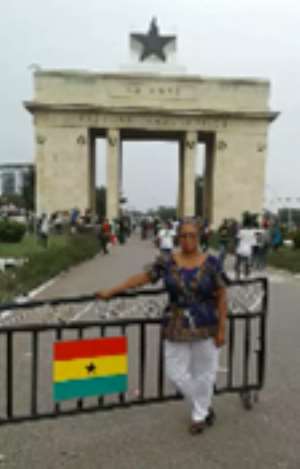 “What happens to a dream deferred? Does it dry up like a raisin in the sun? ...” – Langston Hughes, African American poet.

Yes, Mother Africa is beautiful— majestic, the Land of Paradise.

But! – lets focus in closer to get a life size perspective, Ghana/African societies have been high-jacked by racist European neo-colonialists, and many corrupt and reckless ‘Negropeans’ (term conceptualized by Dr. Marimba Ani).

Negropeans in Africa who dream of assimilation into ‘whiteness’ and keeping African nations plugged into the British the commonwealth; and dreams of off-shore bank accounts, running to Dubai, and private jets with showers at the expense of the masses who continue to suffer under the restraints of poverty.

Negropeans struggling for status and attention from European secret societies, and only concerned about the people on the bottom of their pyramid they can control via miseducating and can get away with intimidating and violating their human rights.

Negropeans who are placing African nations in generational debt, and selling off natural resources, lands and ports as swiftly as they can sign on the dotted line. It will take your breath away.

Negropeans who have devised two choices for repatriating Ascendants of Africans who were enslaved-- on one hand to reside in Ghana for ten (10) years to receive ‘Right of Abode’ (no political rights) or on the other hand, financially qualify for a “citizenship with no political rights” (K. Asare). Such choices served up by Negropeans who dare conspire with foreigners, and have the audacity to pour libation to African Ancestors, or genuflect or go hoop and holler Sunday morning.

African Diasporans, yes repatriate, a birthright. However, I advise you, do not give yourself a false sense of security or glorify Africa to the point of complete oblivion to its reality. Repatriate, but at the very foundation should be Pan Africanism, and of course return HOME with a purpose of helping to clean-up and uplift Africa. To not care to get involved in the community until the problem lands on the doorstep of your newly built house or after your two-year rent has been paid (which is illegal, see Rent Control) is negligence.

What would Presidents Kwame Nkrumah, Nnamdi Azikiwe, Sekou Toure, Patrice Lumumba, Jomo Kenyatta… think of the chaos? African nations listed on ‘Corruption Indexes’ and as HIPCs, and many of the people wearing used clothes and underwear from European nations. Where is the independence in this?

Where is the independence from European colonial rule Pan African revolutionaries fought and died for?

Many of our people are imbued with self-hate, tribalism, and are demanding bribes and scamming, which has become a daily assault on the next person that resembles their ‘Blackness’, or who reminds them of their wicked desperation and poverty.

As Africa media reports, there are hungry men and women lashing out at the people while in uniforms in Ghana/Africa. Are you really securing and serving the people or are you a brutal scavenger ‘impersonating an officer’?

Reflecting on the film ‘Sankofa’ (1993) by Haile Gerima— it is disturbing how tourist agencies and minister of tourism office continue to market Ghana chattel slave castle/dungeons coastlines as “red hot vacation spots” to repatriates (and tourists); to rally Black people to come pay for entry into castles our African Ancestors were beaten through; and to lay out on the same beaches where African Ancestors were captured dragged, branded, traded and even slaughtered.

The Castles/Dungeons can be maintained by the Europeans who forced enslaved Africans--free labor at the end of their whips. As a part of reparations, Ghana needs to contact those Europeans to come keep up their castles/dungeons on a yearly basis.

In their spirit of coastline piracy, real estate agents using graphic artistry in their efforts to sell overpriced property, photoshopping open sewers on pictures, and not explaining the necessity of poly-tanks and generator; and then to add insult to injury, certain chieftaincies selling lands multiple times

The ‘isms’ and mental health issues that are usually denied by Ghanaians/Continental Africans, are real and stemming from chattel slave traumas, wicked slave market practices and poverty are deeply embedded in psyches, causing an imbalance within every sector of the nation. The psychological and economic problems are putting a choke-hold on efforts to re-develop Africa.

What is the African Union doing about this? Is the AU another African organization infiltrated by agents, European invaders and land grabbers?

To-- African Diasporans Repatriating (be it visiting or residing permanently) and Continental Africans-- Mother Africa’s house is in a serious disarray. Are the Pan African revolutionaries’ visions of an independent, decolonized and re-developed Africa, in the words of African American poet Langston Hughes-- “a dream deferred”? Emphatically, no.

Enough of maintaining borders created by Europeans in 1884. Why not devise a Pan African system and cease supporting a Eurocentric neo-colonial one?

Farm, fish, plant fruit trees and help feed the people. Discipline ourselves to read and value education. Plan doable goals, which would raise self-esteems and loyalty. And be determined to get up out of the quagmire and re-build a truly independent and united Africa-- a utopia.

Let us not defer the dream any longer. Awaken, and “Forward ever…”

Dr. K. Makeda Muhammad is a ‘Repatriate’ a returnee to Africa via Ghana in 2011. Dr. Makeda’s field of study is Black Studies; she is an educator, writer, Pan Africanist, community activist, and social media freedom fighter.