Cry Babies and Other Stories 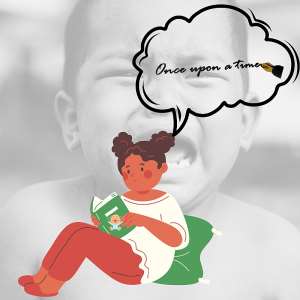 Once upon a time… time, time!!
There was an association of first class citizens; the real descendants of Adam and Eve or Adamu and Hawa or Dear Boy (It’s unclear who was his female reproductive counterpart). The association was so bedeviled by nagging problems that, the members sent word to the occupant of the third most important stool in the kingdom, praying for a date for a meeting at 9 a.m in the forenoon that same day or so soon thereafter. When the third-most-important man received the message, he was excited at the prospect of meeting and listening to whatever was giving his compatriots a flea in the ear.

And thus it was that the meeting hour arrived and a member of the association constituted her/himself a spokesperson (name and gender unknown – most likely, a hermaphrodite – so she/he will hereafter be referred to simply as “they”, for ease of reference). So, they were dressed in full association regalia of cream-coloured faux horse hair wigs that cascaded to their knees, and black gabardine frock over three-piece suits that had seen many summers. They ascended a dozen flight of stairs into the third-most-important-man’s chamber, sweating, panting and cursing with each step taken. Well-known for his great sense of hospitality and affinity to tradition, the third-most-important-man had spared no effort in laying on a feast of local delicacies for his august guests.

With the indoor 100-metre dash over, the third-most-important man ordered his Usher to serve hors d’oeuvre to set the stage for the feast, in keeping with tradition. But before the Usher would return, they started shaking, with uncontrollable tears, as big as raindrops, streaming down their cheeks, thereby messing their white collaret and wing tips with rainbow colours. The third-most-important-man was stunned at the pitiful sight and he quickly grabbed a box of tissue paper in a kente-inspired paper box which he keeps on his desk as part of the ‘preserving tradition for posterity’ agenda. They were very appreciative of the third-most-important man’s kindness and thanked him profusely. Not knowing what other emotional surprise they may have under their sleeves, the third-most-important man knew better than to keep crying babies with no activity.

The third-most-important-man, therefore, decided to put a hold on the traditional niceties of hosting guests and to cut to the chase. He launched straight into ‘the purpose of the gathering’ segment. This is what ensued:

They: “The pleasure is all ours, Your Eminence, Your Third-Most-Important-Man-in-the-Kingdom, Your Lord Temporal, Your 26th Third-Most-Important, Your Numero Trois J…” Before they could finish off whatever accolades they had conjured up in the spare of the moment, the third-most-important man cut in neatly: “So, to what do I owe the pleasure of this teary visit?” Whereupon they started a long narration, interspersed with sobs and nose-blowing, thereby using up all of the third-most-important-man’s tissue, leaving the traditional kente box containing the tissue empty and sad. “Such nuisance!” the third-most-important-man muttered to himself. Thankfully, not to you-know-who’s hearing.

They then started the ‘Sermon in the Chamber’; of course, the sobbing continuing unabated, much to the third-most-important-man’s discomfort: “My Lord Temporal, there is a creeping development in our association, and if you do not intervene, all the great work you have been doing to preserve our hallowed traditions since you became the 26th will come to naught.” “Holy Mary, Mother of Jee-zaz! What could this unfathomable problem be? Haste me to know’t, that I, with wings as swift as meditation or the thoughts of love, may sweep to my, erm, action!” With such firm assurance of action, they carried on: ”So, Right Honourable, the problem is that, nowadays, the young members of our association are not respecting tradition. Those under pupillage, as you are well aware, by the debilitating decision of the Court of Appeal in Klu v Laryea, do not have audience before our Courts. But instead of them to wake up, bath and come and sit in courtrooms and see seniors display their well-honed art of advocacy and learn, they don’t come. And for the juniors who are one to ten years old at the Bar who come to Court, (by the association’s rules, a senior is ten or more years at the Bar) they don’t wait for us to teach them the finer tenets of advocacy. They are always in a hurry, forgetting that ‘omnis festinatio ex parte diaboli est’[1]. My-Lord-Who-is-Lord, in times like this, we miss Atuguba, JSC. His Lordship it was who was protecting legal Latin within our jurisdiction to preserve tradition. At our next association meeting, we will table a motion to confer an award on His Lordship in retirement, as the last champion and award winner of ‘Latin as Legal Language‘ in our generation. We miss him more so because we are still looking for the vernacular translation of ‘ut floreat justitia’ as used by His Lordship in Ex parte Oblie.[2] Even our friend, the Prince Royal, swears he doesn’t know what those exotic Latin words mean. Now, Your Eminence, as we were saying, when the ‘young ones’ come to Court, they bully and shove us the seniors aside and get their cases called. They intimidate us so much that most of our senior members have stopped practicing. This is the biggest problem confronting our association in 2022 and if we do not nip it in the bud, in a year’s time, all senior members will stop practicing law and the tradition of wearing our beloved wigs and gowns (as we are dressed right now), which you have done so much to preserve, will only be on display in a corner of the refurbished National Museum for curious kindergarteners to go and see and learn how their ancestors dressed to court up to A.D 2022. So you see, Your Great No. Threeship, you need to step in and put the junior members on the straight and narrow path. We entreat you, Our Precious Lord, to pass a constitutional instrument (C.I) to provide for the following: ‘If you are a junior and have been sent to Court to take a date or you have a motion ex parte of any kind, it shall be mandatory for you to sit in the courtroom till all seniors present finish their cases and hearings before your case shall be called.’ That will be preserving the best tradition of our profession. Our Lord Temporal-semi-Spiritual, we rest our case and submit accordingly.” They blew their noses loudest for the last time to signify the end of the tears and the hope for a favourable response to come.

For several minutes, the third-most-important-man remained quiet and kept rubbing his temples gently, lost in deep thought. After what seemed like eternity, he started off in a cool, gentlemanly fashion as follows: “Thank you very much for coming and for bringing me such vital information. I will take the necessary action to ensure that the best traditions of our profession are preserved. That’s the legacy I’m leaving for you. Wearing of wigs and gowns from District Court to Supreme Court all year round has been reinstated and entrenched as you are aware. The Divisions created in the High Court have been shuffled so that, if you are a Commercial or Labour Court Judge, and a cockroach is found in a bottle of water and the purchaser sues, it may be assigned to you. If you don’t remember your tort law on product liability, go and learn. High Courts are being moved from the purpose-built High Court Complex back to their pre-colonial premises. As a direct outcome, of this fantastic move I made, the traditional gridlock vehicular traffic on the High Street is back with a vengeance. So you see, a lot is already being done to preserve tradition so what you call your problem is not a problem at all. The measures I’ll put in place to deal with the situation will bring their better nature to the fore; I mean your junior lawyers who are growing too big for their breeches. Consider it done.”

“And by the way, how are your members faring?” inquired the third-most-important man. “Oh, they are all very very very fine, Sir. They send their heartfelt felicitations,” they replied with glee. With such assurances of contentment amongst the general membership of the association, the third-most-important-man decided to ask a few questions to bring the meeting to a close.

The third-most-important man: “So, how are you enjoying the e-justice system?”

They: “Ahhhh, that thing, we have forgotten about it o, Your Eminence.”

The third-most-important man: “I mean, is it working?”

They: No, Right Honourable.
The third-most-important man: Do you get notified when a Judge will not be sitting so that you don’t waste time, energy and resources to drive to court?

They: No, Your Lordship Temporal.
The third-most-important man: Is there adequate parking at the Court Complex?

They: No, Your Learned Eminence.
The third-most-important man: After introducing ADR through C.I 133 and C.I 134, has the use of ADR in settling cases become popular?

They: No.
The third-most-important man: Have you conducted your Regional Branch executive elections six months into the current legal year?

They: No.
The third-most-important man: And you say your biggest problem is a young member who will not sit in court and listen to your hoarse voices and atrocious legal submissions. Come on, leave my presence before I call my orderly to apply maximum force to remove you.”

To aid swift movement, they removed the wigs and gowns, rolled them into one folded garment, stuffed it in the bin on their way out, and took to their heels.

The End.
FOOTNOTES
[1] Translates into English as ‘all haste is of the devil’.