Otumfuo Osei Tutu Was Right, Nkrumah did not only Despise Baffour Akoto but Ashantis as Well 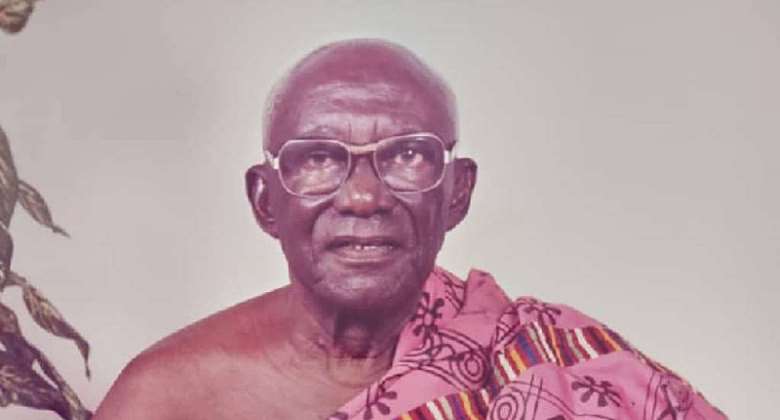 An article authored by Kofi Thompson, Managing Editor of the National Review Newspaper with the title; “President Nkrumah Despised Baffuor Akoto - But Never Hated Ashantis” has been chanced on. The said article has been published by Modern Ghana, an online news website, and as well, shared on their official Facebook wall.

After a careful diagnosis of the article which sought to clarify a pronouncement by Otumfuo Osei Tutu, the King of the Asante Kingdom during his address of some issues raised by the Dormaahene, at the first Asanteman Council Meeting for the year, the article has been found to be packed with numerous distortions of historical facts.

Otumfuo Osei Tutu, during his address of the Asanteman Council Meeting, acknowledged that, even though Kwame Nkrumah did not like them [Asantes], the Bono Ahafo region created out of the Western Ashanti at that time, did not alter the existence of the traditional arrangement, therefore, the creation of the Bono region cannot affect the traditional autonomy of the Asante Kingdom.

The author in his article sought to create the impression that, Kwame Nkrumah and his CPP government never hated Asantes, but rather, it was Okyeame Baffuor Osei Akoto, the godfather of Otumfuo Osei Tutu, he despised due to his senseless acts of terrorism. This notion he created is wrong, of which, I seek to use this as an opportunity for clarification.

First of all, it is imperative to note that, the National Liberation Movement (NLM), the Party which brought about the political paradigm shift, changed the political dimension of Gold Coast, and gave Kwame Nkrumah and his CPP government a formidable opposition was formed by Okyeame Baffuor Akoto in September, 1954, so it was practically impossible for the NLM to partake in the 1951 and June 1954 general elections of Gold Coast as quoted by the author. This as a result corroborates the perception of concoction and distortion meant to misinform the populace clouding the motive behind the article. Despite the fact that, the NLM lost the 1956 general elections; the elections to determine the constitutional path for Gold Coast before she was handed independence, the Party’s performance was still very impeccable. Note, It became the first opposition party to snatch secured seats of the CPP, in addition to, a pull of the greatest number of popular votes since 1951. Through the political dexterity of Okyeame Akoto and the performance of the NLM, Okyeame Baffuor Akoto was able to create a great political opposition force against Kwame Nkrumah by bringing all the then opposition political parties together which eventually spurred Kwame Nkrumah to disband the opposition political parties out of fear of being taken out through the ballot.

More over, Kwame Nkrumah hated Asantes as rightly opined by Otumfuo Osei Tutu because, after the 1951 general elections, the first in Africa to be held under universal suffrage, Kwame Nkrumah continuously pursued numerous agenda that had the tendency to diminish Asante’s economic, political and historical relevance in Gold Coast.

It is worthy to note that, with cocoa being the major export of Gold Coast produced mainly in Asante, and the economic welfare of Asante as a whole tied to cocoa, Kwame Nkrumah was very aware that, a freeze of the price of cocoa at a lower price compared to the world market price would weaken the economic influence of Asantes, yet he pushed a bill that froze the price of cocoa at 72 shillings instead of 150 shillings per load. At that time, Gold Coast was the major producer of cocoa in the world.

In Kwame Nkrumah’s desperation to undermine the political and historical influence of Asanteman, he influenced and considered a petition by various Brong chiefs for government’s recognition of a separate Brong-Kyempim Council. To further debilitate the political influence of Asante, during the Representational reform in 1953 which was to provide for allocation of seats to the 1954 legislative assembly, Asante was allocated 21 seats instead of the 30 seats she rightly deserved. The mischievous aspect is that, the 21 seats representing 20% reflected a decline from her initial 25% share of seats in the 1951 Assembly. In addition, in order for Kwame Nkrumah to get a stronger hold of Asanteman under his manipulation, Kwame Nkrumah selected his preferred CPP candidates for all the 21 seats in Asante for the 1954 legislative assembly elections despite the disapproval of the local constituencies.

Again, the author’s assertion that Okyeame Baffuor Osei Akoto was just a barbarian who engaged in senseless acts of terrorism is not factual. It was rather Kwame Nkrumah who was a tyrant who believed in the suppression and intimidation of political opponents, a one-man rule and the autocratic form of government, instead of the Rule of Law. In fact, Okyeame Baffuor Akoto’s actions were never barbaric, but rather, they were actions which continuously stood against authoritarianism, and through that, influenced all the constitutions and the democracy we enjoy today as a Nation.

In fact, Kwame Nkrumah provoked all the violence due to his undemocratic activities, and that, the many violence that erupted in the many parts of Asante and elsewhere between 1954 and 1957 were just defensive retaliations by the NLM to the many attempts by Kwame Nkrumah to intimidate and suppress the activities and development of opposition parties in Gold Coast.

It is suffice to note that, right after the formation of the NLM in September, 1954, as part of the plans to suppress the rapid growing movement, Twumasi-Ankrah, CPP Asante regional propaganda secretary, suspected to be under the direct orders of Kwame Nkrumah, started a commotion in the central party office of NLM which eventually led to the stabbing and death of E.Y Baffoe, the NLM Propaganda Secretary in October, 1954. Similar attempts by Kwame Nkrumah and his CPP led government to suppress opposition led to the death of two NLM members at Kumasi Zongo and Kwasi Ampofo, a Prince of the Akyem Abuakwa stool and a staunch NLM member in January and May, 1955 respectively. More over, two key leaders of the Muslim Association Party in Kumase, Alhaji Amadu Baba; Serikin Zongo and Mallam Alhaji Alfa Lardan; head of the Zongo Volunteers were deported under the Deportation Act of August, 1957, on the spurious grounds that they were not Ghanaian citizens.

Due to the autocratic nature of Kwame Nkrumah, between 1951 and 1966, he continuously pushed in place Bills and Constitutional amendments meant only to intimidate political opponents, and suppress the existence of opposition parties and the rule of law. They included the Avoidance of Discrimination Act, 1957, Prevention Detention Act (PDA), 1958, Deportation Act of 1957, Elimination of the Powers of the Chieftaincy, Declaration of Ghana as a One-Party State, among others.

The aforementioned facts and the many others go on to corroborate the chest held facts that, Kwame Nkrumah was an authoritarian and hated Asantes. And that, all the sacrifices and activities that Okyeame Baffuor Akoto embarked on during the course of his political life were just to resist and fight against the infringement of human rights, autocratic rule, and through that, spur for the deepening of democracy and the rule of law of the Nation.